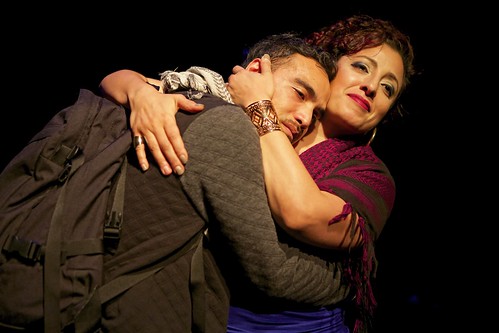 Denmo Ibrahim is Tyra, Amor’s grandmother and one of many people surrounding Amor (Shoresh Alaudini) in his time of need in Jonas Hassen Khemiri’s I Call My Brothers, a Crowded Fire Theater production at Thick House. Below: The cast of Brothers includes, from left, Olivia Rosaldo, Mohammad Shehata, Alaudini and Ibrahim. Photos by Pak Han


Not much happens in Jonas Hassen Khemiri’s I Call My Brothers, a Crowded Fire Theater production at Thick House. But then again, everything happens.

This is a mostly subterranean drama, which is to say, a little happens on the surface – a young man goes about his day running errands and interacting with friends and family – but a whole lot more is happening in his thoughts, his imagination, his paranoia. There’s a fragmented feeling to this 75-minute drama, and that’s reflected in the sculptural set design by Adeline Smith depicting what looks like a frozen explosion – all sharp, jagged edges – hovering just above the performance space.

Having that kind of visual energy dominating the space (and beautifully lit by Beth Hersh) makes sense for several reasons. In the play, set in a big New York-ish city, there has been a car bomb explosion in the heart of the metropolis, so the frozen explosions make sense in terms of that plot point. But it also lends an ominous, potentially dangerous tone as we explore the mental state of Amor, the young man, played with captivating intensity by Shoresh Alaudini.

The plot, such as it is, revolves around the possibility that Amor, because of what he looks like, because of the keffiyeh he wears around his neck, because of the color of his skin, because of his name, because of his big backpack, because of his cultural and religious background, will be suspected of being a terrorist. A repeated set of instructions to Amor and his brothers is to lie low, blend in and not draw attention (but try not to appear like you’re not trying to draw attention). So even the simplest thing, like going to the hardware store to replace a drill head, becomes fraught with tension. At least it does for Amor, who has a very active mind. 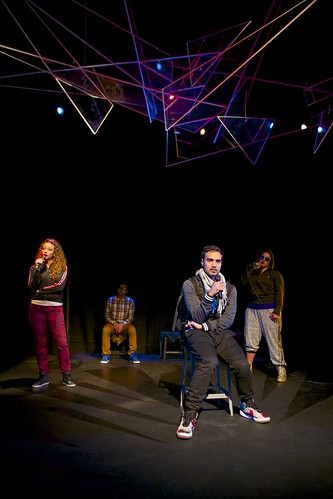 One of the most interesting things about this play is that Khemiri, an admired Swedish playwright and novelist, blends something extreme and terrifying (like being considered a terrorist when you’re just a citizen going about your day) with the turmoil and drama of being a young man who has family issues (his dad has returned, with other family members, to the country he was born in) and romantic obsessions (he is in love with a childhood friend who does not return his affections beyond their friendship). As we spend time with Amor and get used to the way his mind flips back and forth in time and between fantasy and reality, we get that he’s incredibly intelligent, big hearted and rather unstable. That instability poses a constant threat that he might give in to his fantasies or succumb to the pressure (real or imagined) of being a dangerous criminal and do something stupid and/or dangerous (he does have an old knife in his pocket).

That tension is part of what propels director Evren Odcikin’ compelling, superbly acted production. The four-person cast brings focused energy that allows Alaudini’s Amor to remain the center of the action while surrounding him with key shadings of humor, reality, fantasy, danger and, ultimately, connection. Denmo Ibrahim is powerful in two key roles: a cousin who has embraced spirituality and a grandmother who provides solace. Olivia Rosaldo shines as a voice on the phone trying to get Amor to support animal rights but who turns out to be something more and as Valeria, Amor’s unrequited love. Mohammad Shehata is Amor’s best friend, Shavi, a guy who’s mostly talk until he marries and has a daughter. In many ways, Shavi – annoying and jittery and lovable – is the heart of the story, the person with the best chance of getting through to Amor and pulling him out of his head.

The play doesn’t seem to go anywhere, really, but in the end, Amor has undertaken quite a journey and ends his long, challenging day in a different, potentially more powerful headspace if only because he is less alone.