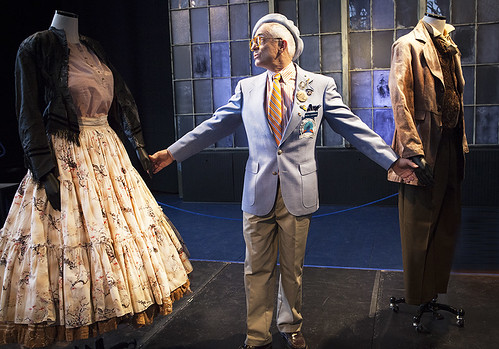 
The tour group is just heading out when the enthusiastic guide, suddenly quite sensible, says, “You will need to extrapolate quite a bit if you wish to enjoy this tour.”

That is, at once, an incredibly honest thing for a tour guide – any tour guide – to say because it’s almost always true and a subtle wink at the theatrical adventure on which we are embarking in Peter Sinn Nachtrieb’s beguiling world premiere A House Tour of the Infamous Porter Family Mansion with Tour Guide Weston Ludlow Londonderry, a commission from Z Space tailor made for its vast space and built on the prodigious talents of actor Danny Scheie.

Scheie, perhaps the Bay Area’s most consistently electrifying actor, is the high-octane engine in this one-man show as Weston Ludlow Londonderry, the tour guide in the light blue blazer and matching beret. We meet Mr. Londonderry in the visitor center of the Porter Family Mansion, one of the historic big buildings in the world worth visiting, according to a list in the visitor center (which also includes the Taj Mahal, Monticello and the Spelling Family Manse). The center’s rather hilarious video introduction to the Porters, narrated by someone claiming to be Linda Hunt, indicates that we are about to see “some of the finest world collections of many different things.” What could be more intriguing?

It turns out that Weston has very little interest in collections of things and is much more interested in the late Porters themselves, Hubert (son of Millie Watanabe, a world-class turmeric addict) and Clarissa, described as “the oatmeal raisin of society, the universal third choice.” When Hubert and Clarissa, both social rejects and physically repellent to all but each other, met at a ball, they found in one another intellectual equals and equally erotic adventurers. We know this because Weston spares no detail in his descriptions of how smart the Porters were and in how many ways they liked to get busy. Living on the fringes of society in a simple shack, Hubert and Clarissa explored (and explored) their every carnal urge and, while they were at it, came up with a unique, fortune-making idea. 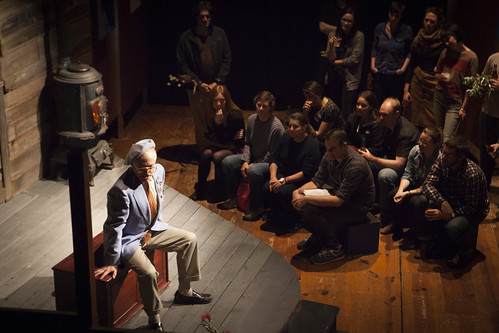 When Ludlow fills us in on all these interesting details, he has already taken us through the garden to the rear entrance (if you read a great deal into that particular detail, Weston would be pleased) and into a replica of the original, rough-hewn Porter shack (the original burned down as a result of young vandals striking sparks with each other) that is now, he tells us, literally and figuratively the cornerstone of the mansion that grew up around it.

Through the marvelously impressionistic efforts of set designer Sean Riley and lighting designer Drew Yerys, our tour takes us through hallways and chambers and rooms and byways of the mansion, always just skirting the other tour groups led by the other tour guides so utterly loathed by Weston: Morgan, Emily and especially Todd. All three are concerned with furniture and the trappings of wealth and society, none of which, we learn, held any interest to the Porters, who lived a secret life under the veneer of their seemingly “normal” mansion.

Weston takes our group into some surprising places and makes some surprising offerings (some edible, some concerned with moisturizing), all in the name of providing an authentic tour and a thorough exploration of the lives and work of two iconoclasts he quite obviously admires. The deeper we journey into the mansion, the deeper we go into Weston’s psyche and the darker the play becomes. If, to honor the spirt of the Porters, Weston could have us all delve into an ecstatic orgy near “the stick of butter that changed it all,” he would, and he comes pretty close near the tour’s end.

That the audience, sorry, tourists, are willing to do whatever Weston tells us to is credit to Scheie’s sharp, disarming performance, which only grows funnier and more poignant as the 90-minute play draws on. Scheie’s expertise keeps the crowd under his spell and (with help from the stage crew shifting set pieces around) helps us extrapolate like pros. Nachtrieb’s play, with its delicious turns of phrase, rich ribaldry and generous embrace of all things “abnormal,” is loaded with big laughs, surprises and a climax that both Hubert and Clarissa would have loved to detail in their personal diaries (available, we’re told, in the gift shop as a set). Director Jason Eagan conquers this massive endeavor, which could be gimmicky, into a consistently intriguing experience that allows a piece of immersive theater to be truly immersive.

There are tours and then there are tours de force. A House Tour is the latter, a triumph for playwright and star, and a theatrical experience to remember.

1 thought on “A Tour de force for Scheie and Nachtrieb”