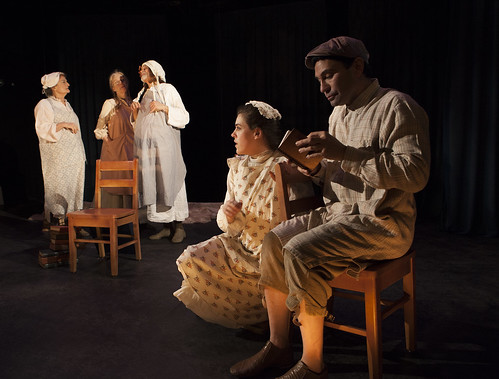 Franny (Rosie Hallett) is read to by her brother (Rudy Guerrero) one family evening in a scene from Emma Donoghue’s “Night Vision,” part of Word for Word’s Stories by Emma Donoghue and Colm Tóibín at Z Below. Below: Lady Gregory (Stephanie Hunt) contemplates her secret in Tóibín’s “Silence.” Photos by Julie Schuchard


There is nothing more comforting than a Word for Word production. This extraordinary company’s rich stage adaptations of short fiction for the stage can be thrilling, inventive, moving, incisive, funny and thought provoking. And, in that way that great writing can take you into that zone of alternate experience, they can be comforting. Maybe that’s akin to the joy of being read to – there is that element in play, but augmented with the beauty of sets, lights, costumes, music and the combined thrill of both reading and live theater.

The new Word for Word show, Stories by Emma Donoghue and Colm Tóbín now at Z Below, comprises two gentle, emotionally rich stories by Irish writers who both happen to be nominated for Academy Awards this year: Donoghue for her adaptation of her novel Room for the screen and Tóibín for the film version of his novel Brooklyn. In their selected stories, both writers are inspired by the lives of real women finding their voices as writers.

Donoghue’s story “Night Vision” from her 2004 collection The Woman Who Gave Birth to Rabbits begins the two-hour evening with a look at the early life of Frances Brown, later known as the “Blind Poetess of Donegal.” Brown, played by 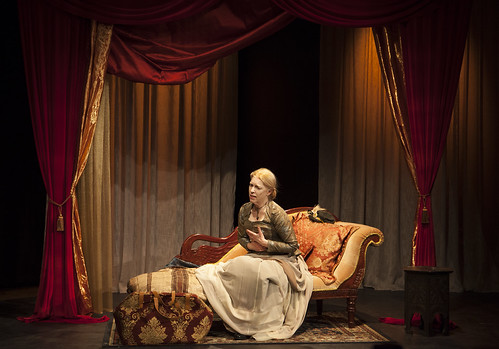 There’s tension in the Brown household on this night because there has been trouble at the schoolhouse. Franny attended her first, and possibly her last, class, and though her aptitude and intelligence cannot be questioned, the powers that be see only her blindness, the result of smallpox. A blind girl, they say, has no place in the classroom for she is a “stunted little girl.”

As played by Hallet and under the smooth direction of Becca Wolff, Franny is a life force who refuses to be cowed by the stupidity and cruelty of others: “The Minister must be wrong. Didn’t I live, when bigger children died of the same fever? This must mean I have been chosen for something. There must be another future for me, if I’m not to be a woman like other women and have twelve children. If I do not grow up to be a poet, then what does that all mean?”

Night Vision is a beautiful story gently and sensitively brought to life by Wolff and her sharp six-person ensemble headed by the luminous Hallett.

The second story is Tóibín’s “Silence” from his 2011 collection The Empty Family. It’s subject is Isabelle Augusta, known as Lady Gregory one of the founders of the revered Abbey Theatre. But before she was an accomplished writer and literary force in her own right, she was, according to Tóibín, an almost painfully self-aware new wife married to a man 35 years her senior.

As played by Stephanie Hunt, Lady Gregory has a vibrant interior life, even as she maintains a placid exterior, fulfilling the duties as wife and companion to Lord William Gregory (Richard Farrell).

The thrust of the story stems from an item found in one of Henry James’ journals, something that was shared with him by Lady Gregory about an affair she had with the poet Wilfrid Scawen Blunt (Rudy Guerrero), and into whose published work she managed to include some of her own work.

Directed by Jim Cave, the story has a slow build to it that is augmented by a warm, elegant set (by Jacquelyn Scott) and lights (by Jeff Rowlings). There’s passion here, and it’s satisfying to watch Lady Gregory come into her own power as a writer as she (via Tóibín) becomes the author of the story that James (well played by Robert Sicular) never got around to telling himself.