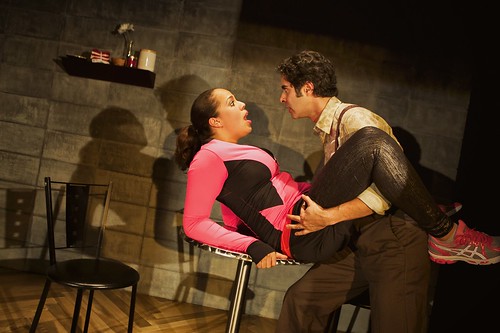 Lauren Spencer as Faizi and Damien Seperi as Georg attempt to get under the hood in the world premiere by Dipika Guha’s Mechanics of Love, a Crowded Fire Theater production at the Thick House. Below: Luisa Frasconi is Francesca, a ballerina with an artificial spine in search of love, and Carl Holvick is the man who forgets everything … until he meets the ballerina. Photos by Pak Han


There’s something so odd, so wonderfully odd about Dipika Guha’s Mechanics of Love, a world-premiere comedy from Crowded Fire Theater. There’s a decidedly offbeat rhythm to this delightful one-act, a sort of controlled silliness underscored by a decidedly serious exploration of just how the metaphorical gears of the heart do (or do not) turn into roaring engines when connected to the gears of another.

This is a play that literally goes inside the box to think outside the box when it comes to love. Set designer Deanna L. Zibello turns the small Thick House performance space into separate little diorama boxes. One is the home of Francesca, a former ballerina, whose spinal injury ended her career and landed her with a somehow strong but fragile artificial spine. Her little home is dominated by a mirror in front of which she stretches and dances her peculiar style of dance. The other box is the home of Faizi and Glen, a married couple with a peculiar problem. Glen, if we’re to believe the sign sewn into his jacket, is the man who forgets everything. He keeps forgetting that he’s married and ends up marrying other women, most recently Francesca the ballerina.

Under Francesca’s box is a space delineated for an auto shop, where mechanic Georg, a good friend of forgetful Glen’s, works on motors like the big red one that hovers over the stage. 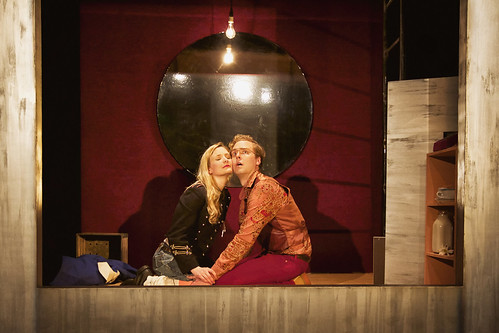 Within these little domains there occurs abundant loving, questioning, forgetting and abandoning. Think of La Ronde crossed with Three’s Company that ends up looking and feeling like a Wes Anderson movie and you begin to get the idea, but there’s a sure-handed comic tone, both to Guha’s amusing script and director Jessa Brie Moreno’s measured work with her marvelous actors: Carl Hovick as Glen, Luisa Frasconi as Francesca, Damien Seperi as Georg and Lauren Spencer as Faizi.

The characters in this 75-minute play live, according to Guha, in a “mythical European city pressed up against a Communist state” (you have to read the program to fully get that), and they live their lives, or at least the sliver we see, with great abandon. They play charades with competitive fervor, they debate the ins and outs of working with one’s hands, and they keep falling in and out of love with one another with much shuffling of who is living with whom at any given moment.

It’s not like they’re hippies on a commune trading free love. They just happen to be exploring, as the title puts it, the mechanics of love, and in close proximity with one another, they keep finding new, impulsive ways to love each other. Conversely, they also find ways to move on from one another with seemingly few hurt feelings or other repercussions.

And that, perhaps, is where the play began to lose me a bit. This mythical world has some very real and recognizable emotions in play, and the tone remains, throughout, rather blithe, even when the shenanigans take a more serious turn. Of the characters, it seems that all have some edge and some depth…except Faizi, who seems manic with little else going on in her.

Guha’s sharp sense of humor remains constant throughout, which is a very good thing, and Frasconi’s Francesca is especially well drawn as a genuine, intensely sweet-natured person who firmly believes, “Love can’t be understood. Only felt.” My favorite line from Francesca: “I’m a feminist but sometimes I forget I’m a feminist. Or my language forgets I’m a feminist.” Though she says she never forgets anything, she begins to forget certain aspects of her life, but she remembers that, as she tells us at the top of the play, she’s good at being in love. So is this play, even if it ends up more on the mechanical side than emotional.