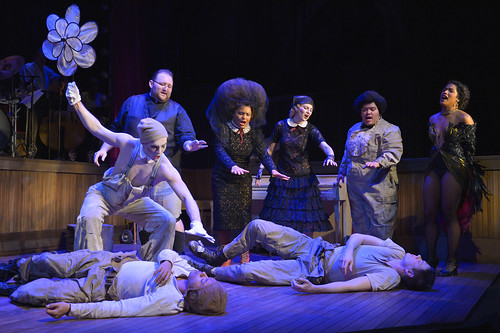 
The Unfortunates is a strange, antic show with some absolutely glorious music. Now at American Conservatory Theater’s Strand Theater, the show is part folklore, part fever dream, part comic book, and all those parts are tied together with songs that bridge folk, hip-hop, jazz and gospel into a stirring Americana sound that doesn’t need much plot, character or context to explode with life.

Created by the team of Jon Beavers, Kristoffer Diaz, Casey Lee Hurt, Ian Merrigan and Ramiz Monsef, this is a show that feels like a big collage filled with images of war, a nightclub in purgatory and a scary hospital all glued together by a hot five-piece band (headed by Hurt on piano and guitar) and the vibrant voices of the 10-member cast.

Inspired by the dark folk-blues tune “St. James Infirmary” – “Give me six crapshooters for pallbearers/Let a chorus girl sing me a song/Put a red-hot jazz band on my funeral march/To raise hell as I roll along” – The Unfortunates had its premiere at the Oregon Shakespeare Festival in 2013 and has been revised for its ACT run. Storytelling is not the show’s forte, but a rousing musical score is. In style and tone, this enterprise feels like it’s taking its cure from Kneehigh (that marvelous British troupe behind Brief Encounter at ACT, The Wild Bride and Tristan and Yseult at Berkeley Rep), but what that company’s shows have that this one doesn’t is a strong emotional pull amid all the wildness and fun and shadows. 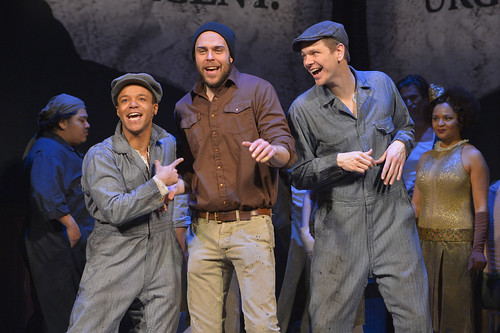 And that’s curious because it begins with a potentially powerful emotional connection between three buddies: Big Joe (Merrigan, Coughlin (Beavers) and CJ (Christopher Livingston). On a particularly drunken night, under the spell of three ladies, they sign up with General Goodtimes (Monsef) to join the war effort. Which war? An imaginary war that is somehow a blend of both World Wars in a colorful graphic novel. There’s a tangible bond between these guys, and when tragedy strikes on the battlefield, Big Joe finds himself dealing with the ghosts of his pals and an array of characters in some sort of hellish/purgatorial cabaret (effectively grimy, show bizzy set design by Sibyl Wickersheimer) where he falls in love with Rae (Taylor Iman Jones, a birdlike woman with a beautiful voice and no arms.

For whatever reason the play takes a Wreck-It Ralph turn when Big Joe acquires giant fists that can kill with a punch and turn a craps game with a pound. In this netherworld, ghosts can apparently die and come back as rooks, birds who collect dead bodies.

After funerals and clowning (by the wonderful Eddie Lopez as Koko), carousing and romancing, a plague darkens the proceedings followed by a sinister doctor (Monsef, playing all the bad guys) enters and takes the afflicted to St. James Infirmary with promise of an antidote.

At only 90 minutes, the show is jam packed with song and incident, but while characters and action take on sort of a formless blur, the musical numbers are distinct and rousing. Erika Chong Shuch’s choreography feels as classic and contemporary as the musical score, which is to say there’s vitality and joy that shines through it all.

The cast members – also including Lauren Hart, Danielle Herbert, Amy Lizardo and Arthur Wise – are all admirable, but I found myself anxious for some sort of comedy starring Beavers, whose comic gifts seem effortless (and underused).

The Unfortunates is a highly original original musical that would probably be better off talking less and singing, dancing and raising the roof that much more.