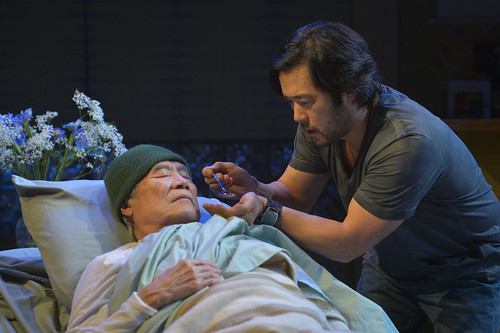 In Julia Cho’s Aubergine, now receiving its world premiere at Berkeley Repertory Theatre’s newly renovated and renamed Peet’s Theatre (formerly the Thrust Stage), those elements – food and death – are being addressed with the utmost compassion, grace and quiet dignity. The play is sad, funny, insightful and deeply moving. It’s a beautiful piece of writing that has become a powerful theatrical experience directed with a strong, sensitive hand by Tony Taccone and performed by a cast that seems to fully appreciate the play’s quiet impact.

The rhythms of Aubergine are different than those we might be used to in a more conventional tale of losing a parent and wrestling with our own mortality. Within the quiet spaces is a lot of introspection, which may seem unusual to audiences that want things spoken about more explicitly. But that’s part of what makes the play so rich and rewarding – there’s space for us to bring our experiences. Cho may be writing a very specific story about a Korean-American family, but she’s really writing about all of us. Commissioned by Berkeley Rep and developed through the Ground Floor: Berkley Rep’s Center for the Creation and Development of New Work, Aubergine skillfully fuses food, memory and mortality into a story about all children and all parents.

The child here is Ray (masterfully played by Tim Kang), a 38-year-old chef who has never quite grown up. When he wants to buy a $2,000 knife, he charges it on his father’s card without bothering to tell his father (played by Sab Shimono), who has lived his life frugally. 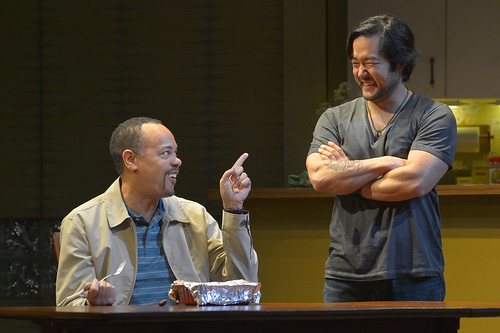 Fights about money or the fact that Ray’s dad never cared about the food Ray cooked are moot now because Ray’s dad is now in hospice care, with a big hospital bed moved into his dining room, while Ray stands uncomfortably by, watching his dad slowly fade. There’s assistance from a hospice worker, Lucien (Tyrone Mitchell Henderson), who doles out compassion along with sturdy doses of reality. At one point, Ray apologizes for not handling things well and says Lucien must think he’s stupid. “I don’t think of anyone as stupid,” he says “But it is strange to me how so few of you see it coming. There’s nothing for miles around, it is the only thing walking towards you and yet, you still can’t see it coming. You turn your heads away.”

Ray’s only friend, it seems, is Cornelia (Jennifer Lim), and even that is complicated. She’s a waitress at the restaurant where he was a chef. They began dating, but then Ray disappeared. She’s hurt and angry but willing to help. Ray speaks no Korean, but she does, so she has to reach out to the estranged brother of Ray’s father in Korea with the sad news of an impending death.

The cultural divide between generations adds fascinating texture to the relationships and is illuminated by stories of food, some of which are told entirely in Korean with English surtitles. Food, it seems, isn’t just what we eat. It’s who we are or who we choose to be.

Food is also magic. Listening to characters talk about transcendent food moments is thrilling, and people who provide those moments – a parent, a chef, a surprising source – have a gift that goes beyond simple description. Ray is one of those people, but he doesn’t quite know it, but coming to terms with his dad and where he is in his life will bring him closer to that realization.

Taccone’s production builds slowly, and the way scenes flow into one another through the simple (and astonishingly quiet) but strikingly beautiful set by Wilson Chin immerses us in the world completely. We go from hospital to home to diner, from present to past, from the U.S. to Korea with graceful efficiency. The same is true of Jiyoun Chang’s lights – there’s such intimacy and clarity in all the settings.

The superb cast also includes strong turns from Safiya Fredericks as a woman for whom food has come to mean some powerful things, and Joseph Steven Yang the uncle from Korea whose lack of English leads him to communicate with Ray in an entirely endearing form of pantomime.

Aubergine is a quietly stunning experience. It is as heartbreaking as it is life affirming, an exquisite meal prepared with superior skill and served with love.

[bonus interview]
I talked to playwright Julia Cho and director Tony Taccone about Aubergine for a feature in the San Francisco Chronicle. Read the story here.