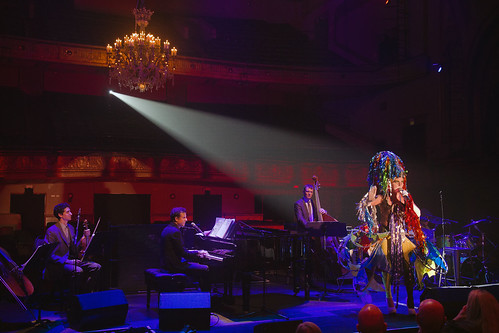 Taylor Mac performs the first act of his epic A 24-Decade History of Popular Music: 1776-1806 as part of Curran: Under Construction. When completed, the song cycle will stretch 240 years, from 1776 to 2016 and will be performed in its entirety over 24 hours. The fabulous costumes are by Machine Dazzle. Photos by Jim Norrena


Taylor Mac emerges, godlike, from the mezzanine, resplendent in a sparkling headdress and gown, and from the stage of the Curran Theatre, where the audience is seated, it looks like the lowered chandelier is actually the crowning part of his ensemble.

Once Mac makes his way to the stage, where he joins his nine-piece band, he may appear less godlike – the dress, on closer inspection, is part tawdry tease, part used car lot banners and tinsel – but remains no less impressive. Towering in his heels, Mac warbles his way through an amazing “Amazing Grace” as he welcomes his audience into Act 1 of his epic undertaking: A 24-Decade History of Popular Music, which, when complete, will be performed once in its entirety, with each decade receiving an hour in the show, making it a full 24-hour concert experience with no intermissions. In smaller chunks, the piece is broken into eight acts, each covering three decades. The first act covers 1776 to 1806, and the last will cover 2006-2016.

While in San Francisco, Mac, a native (and escapee) of Stockton, as part of the Curran: Under Construction series, Mac is performing Act 1 and, for the first time, Act 2: 1806-1836. On Saturday, Jan. 30, he will do a marathon six-hour run of Act 1 and Act 2, and, like all performances from the cycle, there will be no intermissions.

To describe what Mac does in this show requires some critical quilting: there’s performance art, there’s theater, there’s cabaret, there’s agitprop swirled with history, politics and protest. And above all, there are pop songs – popular songs of the day. Not necessarily American songs, but songs that were popular in this country during these particular decades (in the later decades, Mac promises some original songs written in response to performing the entire cycle). Above all else, it’s an experience. It’s fun, it’s long (though the time does fly), it’s thoroughly engaging and Mac is as fascinating and compelling and intelligent and outrageous a star as possible, even when trying to exercise performance art muscles and be annoying or exercise Brechtian distancing techniues. Mac is a true entertainer with a powerful voice as both a singer and a writer (his play Hir, which started out at the Magic Theatre here in 2014 [my review is here], is now a big hit in New York). Mac’s reason for creating this extraordinary piece date back to the mid-’80s and attending the first AIDS Walk in San Francisco. There, on view, was a community deteriorating from the ravages of an epidemic but, at the same time, building itself back up into a community to nurture, fight and survive. That pattern, Mac says, is evident in every decade he’s covering and his show, the 24-hour hone, will deteriorate as it progresses (the 24-piece orchestra on that day will lose a musician an hour leaving a ravaged Mac alone on stage in the final hour) all the while building a new community among the audience members. 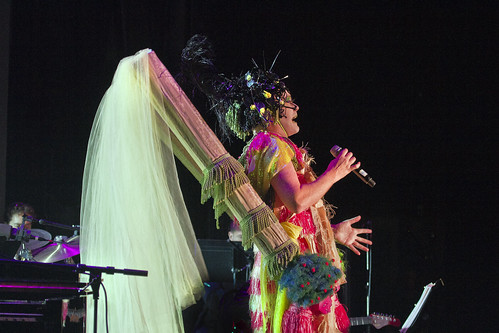 The way Mac builds that community is primarily through his dynamic performance of songs, most of them unfamiliar but all rousingly performed (and arranged by music director/pianist Matt Ray). Mac also engages his audience in all kinds of activities. During “Yankee Doodle Dandy,” for instance, judy (Mac prefers the pronoun judy to a more traditional gender-based pronoun, which is way too creative and fun not to use) explicates the song’s origins (British making fun of behind-the-fashion Americans) and engages judy’s audience in various parts to create chaos representing all the elements on which the country was founded, including loathing of Congress, the longing to be anywhere but America, the adoration of people with black hair and the misinterpretation of Thomas Paine’s “Common Sense.” Mac has an audience member worshipped as a god from the stage, has the “dandy minions” (a squad helpers) outfit audience members in boas and fuzzy ears and the like, and recruits various audience members to play characters opposite judy on stage.

With each new hour comes a new costume designed by Machine Dazzle. The trash-chic glitter of the first hour is replaced by chiffon-dripping columns and hips adorned by severed heads. For the pub section, Mac takes on the character of Crazy Sally, a sort of performance-art barfly whose gown features practical features like rolls of toilet paper and other toiletries. It’s all grandly theatrical, and surprises abound throughout the three hours.

Co-director Niegel Smith and Mac still have a work to do, which they will do throughout this workshop production, but the roughness is part of the charm. Everybody feels in the moment, and as Mac repeats as a sort of mantra, “perfection is for assholes.” As fun as Act 1 is, it also has a certain weight. There’s a moment when Mac is a singing a beautiful lullaby and asks neighbors to put their heads in each other’s laps as if after a night of heavy drinking, and it felt like the onstage community had really clicked. We were in it together and taking a moment of comfort. It was a stunning experience, as is, it would seem, just about anything Mac sets out to do.