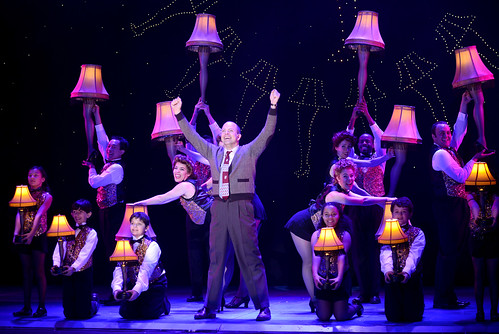 Christopher Swan as The Old Man (center) sings an ode to his leg lamp – a “major award” – in A Christmas Story: The Musical, playing as part of the SHN season at the Orpheum Theatre through Dec. 13. Below: Avital Asuleen is teacher Mrs. Shields and Evan Gray is Ralphie in a number called “You’ll Shoot Your Eye Out.” Photos by Carol Rosegg


I remember seeing A Christmas Story in the movie theater in 1983 (I was in high school), and since then, I’ve probably seen it 50 times or so (in whole or in part) on TV. It helps that TBS has been known to show it in constant rotation for days. So I have affection for the movie and for Jean Shepherd the man who created it (and narrated the movie is wonderfully droll, comforting voice). I hadn’t realized that Shepherd’s stories of the Parker family, of which A Christmas Story is one, were sort of an industry unto themselves. First of all, there was a sequel to A Christmas Story called My Summer Story (also known by the title It Runs in the Family), but the only returning cast member was the woman who played the schoolteacher. The 1994 film, with Charles Grodin and Mary Steenburgen flopped pretty hard. There have also been TV movies about the Parkers courtesy of PBS’ “American Playhouse.” Among the titles are “The Phantom of the Open Hearth” (1976), “The Great American Fourth of July and Other Disasters” (1982) and “Ollie Hopnoodle’s Haven of Bliss” (1988).

A Christmas Story remains the most beloved Shepherd movie, so it’s no surprise that it has been adapted for the stage as a play (by Philip Grecian, which popped up at the now-extinct San Jose Repertory Theatre a few times) and now as a big old Broadway-style musical.

The musical, which began in earnest in 2010 (after a bumpy start in Missouri in 2009) in Seattle with a score by Benj Pasek and Justin Paul and a book by Joseph Robineette. The show eventually made it to Broadway in 2012 and nabbed a couple Tony nominations. The musical finally landed in San Francisco as part of the SHN season, and I reviewed it for the San Francisco Chronicle. Here’s a look.

If you want cute, talented kids combined with catchy tunes, abundant nostalgia and canine guest stars you can look beyond “Annie.” Now we have “A Christmas Story: The Musical” to fit that particular bill.
With a streamlined book by Joseph Robinette and a bright, tuneful score by Benj Pasek and Justin Paul, this “Story” seems tailor made for fans of the movie — a smart movie seeing as how that fan base comprises about 96 percent of the population. As holiday movie-to-stage adaptations go, it’s not as heartfelt or charming as Irving Berlin’s “White Christmas,” but it’s much better than “Elf” or Dr. Seuss’ “How the Grinch Stole Christmas.” 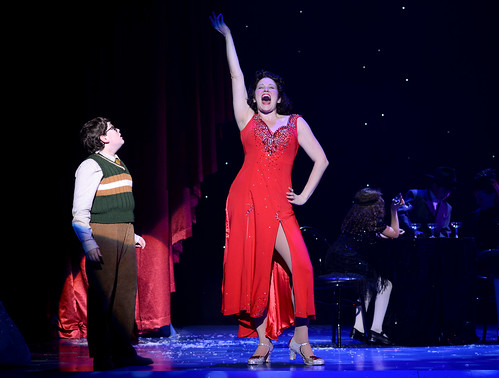 I also talked to co-composer Justin Paul, who, with Benj Pasek, wrote the score of A Christmas Story: The Musical, for a feature in the San Francisco Chronicle. Here’s a peek:

Co-composer Paul says that he and Pasek, who began working together as undergrads in the University of Michigan musical theater program, were somewhat naive when approached with the idea of writing songs for the stage adaptation.
“We didn’t really grasp the scope of this,” Paul says on the phone. “We were 25-year-olds, who didn’t know anything, saying, ‘Sure! Let’s give it a whirl!’ We weren’t intimidated by the movie’s relevance, resonance and ubiquity. We just dug in and wrote a big, traditional musical comedy.”