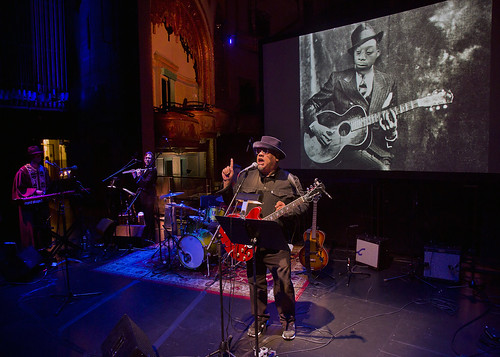 Stew and band The Negro Problem (from left, Art Terry, Mike McGinnis, Stew) in Notes of a Native Son, a musical riff on James Baldwin, at the Curran theatre. Below: Stew and Heidi Rodewald duet on the Curran stage. Photos ©Jim Norrena


Essentially, Notes of a Native Son is a rock show with a literary degree. Ini the words of Stew, the composer (with Heidi Rodewald), this 90-minute show is “not a musical nor a play with music. It’s a song-cycle, a set, a concert, or put squarely, just a buncha songs with banter in between.” And that about sums it up.

But what a description of the show itself can’t convey is the sheer joy, the energy, the alive-ness of the music and feeling created by Stew and his band, the Negro Problem. Stew could make music out of an auto repair manual and make it compelling if he wanted to, but give him a potent topic – like his own autobiography in Passing Strange or, in the case of Notes of a Native Song, the life and work of James Baldwin – and things get really interesting.

Notes, which takes its title from Baldwin’s 1955 collection of essays, is in no way a biography of Baldwin but more of a collage inspired by him, a fantasia on being Baldwin filtered through the being of Stew. What we get is about a dozen songs/poems interspersed with rambling banter in which Stew keeps insisting that this is rock ‘n’ roll and not theater, all performed up close and personal on the stage of the Curran Theatre. The audience is sharing that stage, so when Marty Beller wails on the drum kit as he does on the phenomenal “Poof to Tower,” you feel every vibration from head to toe. This is immersive rock, a personal concert and the kind of literary experience college students can only dream about. 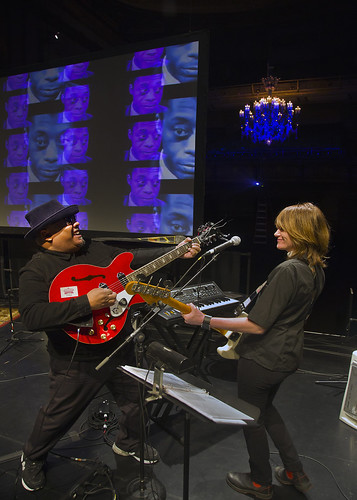 Enjoyment of Notes of a Native Son does not require extensive knowledge of Baldwin, but it will help. The screen behind the band features “video concepts” by Stew and designer Joan Grossman that often amusingly portray Baldwin’s novels as album covers and Baldwin’s face superimposed on the bodies of, say, George Harrison or Jimi Hendrix. At the top of the show, an animated smoking Baldwin says: “Don’t blame any of this on me. These are Stew’s words. Not mine.” Indeed, early on, at Thursday’s opening show, Stew says the show, which was created for the Harlem Stage on the occasion of Baldwin’s 90th birthday, is really a response to Baldwin.

The first song, “Baldwin Country,” contains some of the show’s most powerful music and lyrics as Stew sings in gratitude of great teachers who introduced him to the work of black writers such as Baldwin. “You taught like you gave a fuck,” he wails. Other songs will go into Baldwin’s expat time in France and Istanbul. One of the more interesting songs addresses Baldwin’s criticism of his mentor, Richard Wright, while others deal with Baldwin works such as Go Tell It on the Mountain and The Amen Corner.

There’s a raw honesty to Stew as a writer and performer. Whatever he chooses to convey is somehow automatically compelling, powerful and laid bare. He’s the center of this magnificent maelstrom, but his band kicks some pretty serious ass as well. Rodewald is on bass, guitars and synth. Beller’s drums beguile. Art Terry brings tremendous feeling on piano and Mike McGinnis in yarmulke and tuxedo, keeps the sound varied and fresh on a variety of wind instruments.

The whole Curran space, the stage, the auditorium and the glorious chandelier, are all part of the zesty lighting design by K.J. Hardy and help blur the line between theater and rock show (is there really a difference? it matters not).

I left Notes of a Native Son charged up and ready to read everything of Baldwin’s I could get my hands on. So don’t mind me. I’ll be over here listening to Stew, locked in Giovanni’s Room – at least until the next Curran: Under Construction, a surprise festival that has suddenly made theatergoing in San Francisco as interesting as it has been in a long, long time.

FOR MORE INFORMATION
Stew and the Negro Problem’s Notes of a Native Son continues through Saturday, Dec. 5 at the Curran Theatre, 445 Geary St., San Francisco. Tickets are $25-$50. Visit www.sfcurran.com.