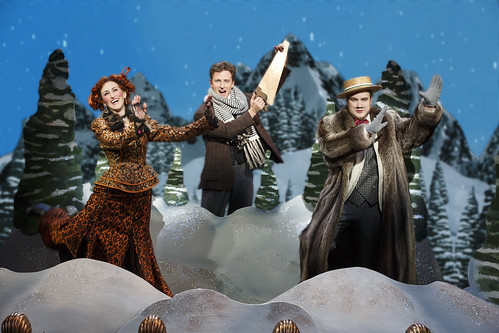 The national touring company of the Tony Award-winning A Gentleman’s Guide to Love & Murder includes (from left) Lesley McKinnell as Miss Barley, Kevin Massey as Monty Navarro and John Rapson as Asquith D’Ysquith, Jr. Below: Rapson as Lord Adalbert D’Ysquith (center in red jacket) surrounded by the cast. Photos by Joan Marcus


You really do root for the murderer in the delightful A Gentleman’s Guide to Love & Murder. That may seem an insensitive scene in these brutal, terrifying days we’re living in, but the reality is that this musical comedy (based on a novel by Roy Horniman, which in turn inspired the wonderful 1949 movie Kind Hearts and Coronets) is all about karma. What you put into the world comes back to you. In this case, it’s about horrible people coming to horrible ends and a seemingly good guy whose kindness and suffering are rewarded until he goes too far and will end up seeing the cycle of retribution coming back to him.

If that sounds heavy, don’t worry. It isn’t. Not in the least. Gentleman’s Guide is 2 1/2 hours of wicked joy. It’s a beautifully crafted piece of musical theater, from set design (Alexander Dodge to lighting (Philip S. Rosenberg) to costumes (Linda Cho), with spotless direction by Darko Tresnnjak of a sterling cast.

It’s easy to see why the show won four Tony Awards including the coveted Best Musical – it’s got a smart book by Robert L. Freedman, a bright, tuneful score by Steven Lutvak and lyrics by both writers that propel the story and generate laughs. There’s nothing about it that doesn’t work. it feels at once like a throwback to bawdy British music hall music and comedy circa 1900 mixed with Gilbert and Sullivan meet Sondheim cleverness with some modern comic sensibility thrown in to keep it fresh.

The entire ensemble is wonderful, but in many ways, this is a two-man show. Kevin Massey is entirely appealing as Montague Navarro, a sweet, humble member of the lower class who learns that his bloodline is anything but impoverished. He is a D’Ysquith, and he happens to be ninth in line to be the Earl of Highhurst. After being harshly rebuffed by the family he has only recently discovered, Monty hatches a plan to murder each D’Ysquith standing between him and his earldom. 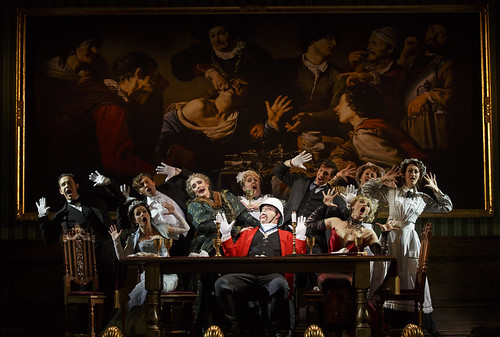 Mostly Monty facilitates deaths rather than causes them. Sometimes he just happens to be there when a member of the cursed family kicks it. But he does participate in the mayhem, and his ascent is not without its darker moments.

Happily all the D’Ysquiths who will soon encounter that bucket and kick it are played by the marvelous John Rapson. A quick-change artist of highest degree, Rapson is hilarious as the toothy Rev. Lord Ezekial D’Ysquith, whose fondness for booze and the top of the bell tower lead to an inevitable fall from grace, and his turn as hammy actress Lady Salomé D’Ysquith Pumphrey, is fast but so very memorable. Rapson and Massey have terrific chemistry (there’s even a kind D’Ysquith, Lord Asquith D’Ysquith Sr.), but the stage positively roars to life with Rapson as the boorish Lord Adalbert D’Ysquith, whose sparring with his equally boorish wife, Lady Eugenia (played by the marvelous Kristen Mengelkoch) is a comic highlight of an already very funny show.

Lutvak and Freedman’s score is so precisely perfect for this story that I didn’t fully get it until I actually saw the show. Having previously listened to the Broadway cast album I appreciated its humor and sophistication but found it hard to discern stand-alone appeal. Now I know why. The songs are the motor of the show and are so character and plot specific that divorced from the show itself, they don’t have their full charge. It’s exciting to hear musical theater songs that astutely crafted.

Massey and Rapson get strong support from their cast, especially Kristen Beth Williams as Sibella, Monty’s one true love who can’t abide his poverty and so marries for money, and Adrienne Eller as Phoeobe D’Ysquith, a distant cousin of Monty’s who ends up as a viable love interest.

It’s astonishing how murdery and feel-good Gentleman’s Guide manages to be. It’s tricky tone is masterfully handled, and if there’s room for a sequel (spoiler alert: there is), I’ll be first in line.

[bonus interview]
I talked to A Gentleman’s Guide to Love & Murder creators Steven Lutvak and Robert Freedman and tour stars John Rapson and Kevin Massey for a feature on the San Francisco Chronicle. Read the story here. Read the sidebar about the inspirational movie Kind Hearts and Coronets here.