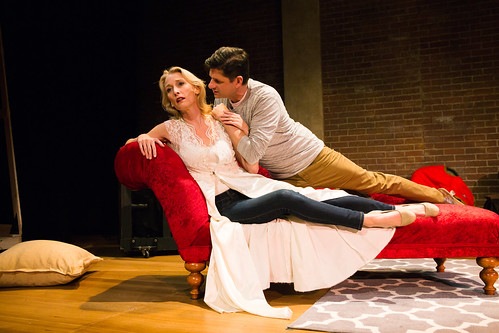 Carrie Paff and Gabriel Marin play actors in a romantic play who share a turbulent romantic past in Sarah Ruhl’s Stage Kiss at San Francisco Playhouse. Below: Marin and Paff, along with Taylor Iman Jones as Angela navigate rocky real life off stage. Photos by Jessica Palopoli


San Francisco Playhouse puckers up and offers a nice juicy kiss for the holidays in Stage Kiss, a delightfully daffy theatrical spin with a touch of real-life melancholy.

This is the first time we’ve seen Ruhl’s play in San Francisco, but the whole Bay Area is alive with the sounds of Ruhl’s empathetic, intelligent, often mystical take on life. Marin Theatre Company and Shotgun Players recently produced her The Oldest Boy (read my review here) and Eurydice respectively. And Berkeley Repertory Theatre is gearing up for her For Peter Pan on Her 70th Birthday next summer.

There’s a reason Ruhl reigns over theater here (and across the country): her plays are warm, wise, funny and fresh. Stage Kiss, a cautious valentine to the theater (it’s wonderful, but it’s tricky, and its make believe has real-life repercussions), feels like equal parts 1930s theatrical farce and contemporary relationship comedy. The tone, as the director of the show within the show says, is “slippery.”

But the show’s actual director, Susi Damilano, mostly navigates the slip-and-slide tonal shifts deftly and with tremendous warmth. Her cast is headed by three Playhouse MVPs: Carrie Paff is an actress just coming back to the stage after leaving to raise a now-16-year-old daughter; Gabriel Marin is her leading man with whom she shared a turbulent but never quite forgotten romance in the past; and Mark Anderson Phillips is perhaps the worst director of all time (“Just go with your instincts!”). All three have shining moments, but Paff is positively luminous as the unnamed actress (known only as She in the program) whose insecurity gets knocked for a loop when her old lover shows up as her co-star. 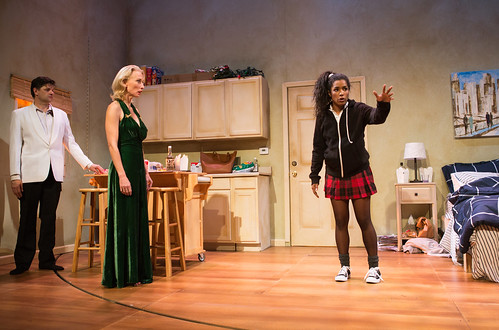 The play’s best moments occur in rehearsal for The Last Kiss a (fictional) creaky old play from the early ’30s, the kind of thing that Katharine Hepburn might have starred in and chewed up all the scenery (including her leading man). Ruhl’s dialogue for the play is convincingly awful, but as the former lovers rekindle their affections, their performances in the silly play suddenly become much more intense and passionate.

There’s a second play within the play in Act 2, a tormented love story abut an IRA terrorist and a whore (title: I Loved You Before I Killed you, or Blurry), and though it’s not quite as fun, it’s still got some big laughs, and all that kissing in the first play is replaced by more challenging fight choreography.

The idea of actors kissing in front of an audience – how weird that is, how titillating – gets a lot of exploration. By the former lover co-stars, of course, but also with the leading man’s understudy (a very funny Allen Darby as Kevin). The leading man, who is described as “a 17-year-old in man pants,” says audiences don’t really like all that kissing. “They tolerate it,” he says. “They don’t really like to see the act of kissing onstage, only the idea of kissing onstage. That’s why actors have to be good-looking, because it’s about an idea, an idea of beauty completing itself. You don’t like to see people do more than kiss onstage, it’s repulsive.”

There’s nothing remotely repulsive about any of the kissing on stage, but his point is well taken. Watching people kiss is odd. But it’s also fun in the proper context, and this context is continually interesting for much of the play’s two hours.

Michael Gene Sullivan, like many of the actors, plays multiple roles. He’s playing the husband of the leading lady in the Act 1 play, and then in Act 2, he plays her real-life husband, who turns out to be much more interesting than we might surmise. His observations about marriage and the way he fights to keep his alive is one of the most heartfelt and interesting aspects of the play. “Marriage is about repetition,” he says to his estranged wife, who has gotten carried away by her theatrical nature. “Every night the sun goes down and moon comes up and you have another chance to be good.”

Also strong in supporting roles are Taylor Iman Jones as several characters in the Act 1 play and then as a real-life daughter in Act 2, and Millie DeBenedt, who steals every scene she’s in when she appears in Act 2 as the leading man’s school teacher girlfriend.

The revolving set by Bill English and Jacquelyn Scott conveys a rich sense of theatricality – Act 1 even gets lush red velvet curtains – and is part of the joke when real life turns into theater.

Stage Kiss doesn’t have the depth of some of Ruhl’s other work, but as light, bright comedies go, it has substance. There are some big, robust laughs here. Even better, this turns out to be a Kiss that lingers.