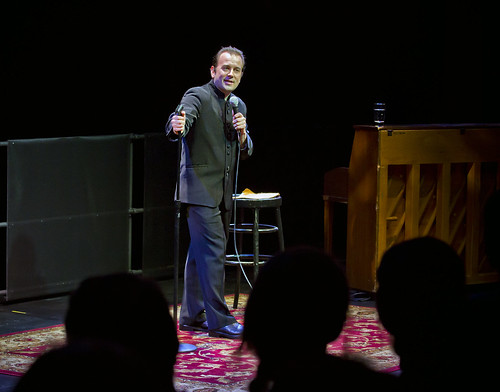 To appreciate Cuiffo’s expertise, it helps to be familiar with Bruce’s voice and delivery. He sounds like this (Cuiffo does a bit like this in his show).

Cuiffo sounds just like this – a little comedian mixed with professor mixed with Rod Serling. He has memorized routines verbatim and delivers them with the pauses, stutters, stumbles and emphasis that Bruce used. The result is a piece of theater that feels remarkably natural. The tension that fuels stand-up comedy is there: will a routine land? will it offend? will it elicit a laugh? will it do any or all of the above? In Bruce’s case, and therefore Cuiffo’s, the result is usually yes to all of the above, though “offend” may be a little strong. Bruce was famous for getting arrested on obscenity charges because of his language, but the fact that we know that (Bruce talks about it in his act and even reads part of his police file) only emphasizes how important words are to him. 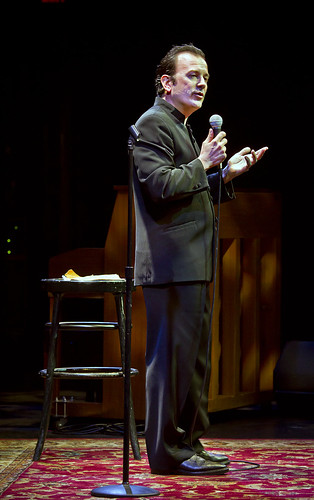 Bruce has the instincts of a comic (vaudeville, burlesque, Catskills) along with the need for the attention that laughs bring (“laughter is acceptance…you’re thinking like I think”), but he has the soul of an artist – a poet, a jazz musician, a philosopher. All of that comes through powerfully in Cuiffo’s hour-long show. In a talk-back after Friday’s show, Cuiffo discussed how important it is to him to convey Bruce in as exacting a manner as possible because, he said, his delivery is as important to his meaning as his words.

There are moments when Bruce still feels dangerous, as in a riff on the word “nigger” and how its constant use would eliminate its power to cause pain. You can hear Bruce do it here, but as you listen, pay attention to yourself and your reaction. Obviously the word (and all the others Bruce throws in there) has not even begun to lose its power, but also consider how extraordinary it is that a “comedy” monologue from 50 years ago is still so resonant.

There’s a quote in the program from Mort Sahl, a contemporary of Bruce’s: “Lenny was looking for hypocrisy all the time and finding the funniness of what people pretend to be versus what they are.” And that seems to cut right to the heart of why Bruce still matters and why Cuiffo’s selection of Bruce material is so canny. That core concept of not accepting the truth, what is is, still feels like the foundation of modern life, with politics and religion leading the hypocritical charge.

Cuiffo is probably as close as we can get to feeling what a Lenny Bruce performance was really like – rollicking, weird, hilarious, provocative, important – and his show, which gains even more power when performed on the stage of the Curran, where Bruce last performed almost exactly 54 years ago, leaves us craving more.

Here’s a taste of Cuiffo as Bruce (the video is a little wonky). Hypocrisy is skewered, especially in the bit involving that “dirty word in a Christian culture: pleasure”: