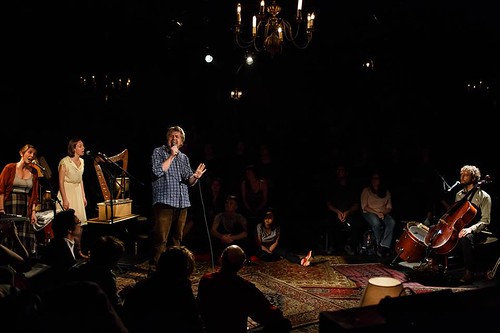 The performers of Ghost Quartet are, from left, Brittain Ashford, Gelsey Bell, Dave Malloy and Brent Arnold. The play/concert/musical/event continues through Oct. 31 at the Curran Theatre as part of the Curran: Under Construction Series. Below: Composer/performer Malloy at work. Photos courtesy of the Curran Theatre


Before I rhapsodize about the incredible Ghost Quartet now at the Curran Theatre as part of the Curran: Under Construction series, can I just say how extraordinary this series has been so far? This is the third show following The Events (review here) and The Object Lesson (review here), and so far, producer Carole Shorenstein Hays is batting a million (I don’t know sports).

At this point, Hays’ curatorial skills have proven so wonderful I’d show up anywhere she told me was worthwhile. At some point in this ongoing series of shows set entirely – audience and all – on the stage of the Curran while it undergoes refurbishment, there will likely be a show that doesn’t blow my mind, but I have no doubt it will at the very least be interesting and worthwhile.

The experience of being on the stage, which has been creatively reconfigured for each show, is surprisingly cozy and intimate – the world’s nicest black box theater. Coming through the stage door at the side alley is exciting, and the staff is always welcoming. Hays is a brilliant producer, but I can’t imagine this impeccably produced series is making loads of money, so I think about this series as her gift to San Francisco audiences. For that we should be incredibly grateful. 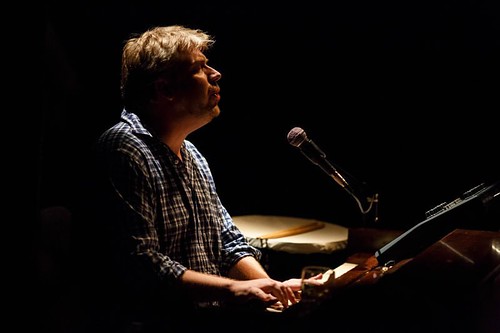 Ghost Quartet heralds the return of Dave Malloy, who made a strong impression when he was a Bay Area resident working with Banana Bag & Bodice on projects like Shotgun Players’ Beowulf – A Thousand Years of Baggage. He decamped to Brooklyn nearly a decade ago and in the interim has produced a major work of genius, the unconventional War and Peace musical Natasha, Pierre & the Great Comet of 1812.

With Ghost Quartet, which was developed at Berkeley Repertory Theatre’s Ground Floor, he’s working in chamber mode, but his fervent intellect, passion for literary mash-up and melodic gifts are out in full force. the audience is seated on three sides of a performance area covered in Persian carpets. The stage’s curtain is up, so the empty Curran auditorium is on full view, with the lowered chandelier becoming sort of a character in the 90-minute piece (all the design is by Christopher Bowser, and it’s low-key spectacular).

Malloy on keyboards and Brent Arnold on cello (and other marvelous stringed instruments) are situated on opposite sides of the center-facing section of audience, while Brittain Ashford and Gelsey Bell on vocals and various harps and things, face forward with their backs to the open auditorium. The central playing area isn’t much used, which means the music surrounds you and the theatrical aspect feels less presentational and more like an active experience of being told an extraordinary story.

So what exactly is Ghost Quartet? I can’t say I got it all, exactly. There’s a multi-layered story thickly interwoven with threads made of Poe’s The Fall of the House of Usher and of the New York Post’s infamous cover photo of a man about to be killed by an oncoming subway train. There are fairy tales (with a nod to Sondheim and Lapine’s Into the Woods) and murders and ghosts and reincarnations and tributes to Thelonious Monk and a conjuring of Arabian Nights. It doesn’t all completely make sense, yet in the moment, amid the music and the performances and the cozy atmosphere and the way the story circles back on itself, it all makes perfect sense somehow.

The evening is broken into four “sides” (as in record albums), and just before we get to Side 3, the audience gets to participate in one of the recurring themes: whiskey (or section got Evan Williams Kentucky bourbon and my fellow audience members were generous with their pours). Just when the night couldn’t get any better – WHISKEY! – the lights go out, and the story unfolds in the dark. I heard some people got uncomfortable in the darkness (ghost stories win), but I loved it. I could have listened to the rest of the show in the dark and been ecstatically happy if they’d started it over again at the end.

But the lights do come back on, and the show comes to its thrilling, interactive conclusion that is sweet and eerie at the same time. The song is the traditional murder ballad “The Wind & Rain” slightly tweaked by Malloy, and it’s hard to imagine a more stirring finale.

These four performers are astonishing. Everybody sings and plays, but the bulk of the dramatic work is handled by Ashford and Bell. They’re so good (and so, for that matter, are Arnold and Malloy) that even when things don’t entirely make sense or you miss a lyric here and there, it doesn’t matter. You’re in good hands, and these performers will deliver you exactly where they want you to go – and that place is likely to blow your mind in the best possible way.

[bonus videos]
Enjoy “Any Kind of Dead Person,” one of the livelier numbers from Ghost Quartet and “Starchild,” one of the most beautiful.

FOR MORE INFORMATION
Dave Malloy’s Ghost Quartet continues through Oct. 31 as part of the Curran: Under Construction series at the Curran Theatre, 445 Geary St., San Francisco. Tickets are $25-$50. Visit www.sfcurran.com.