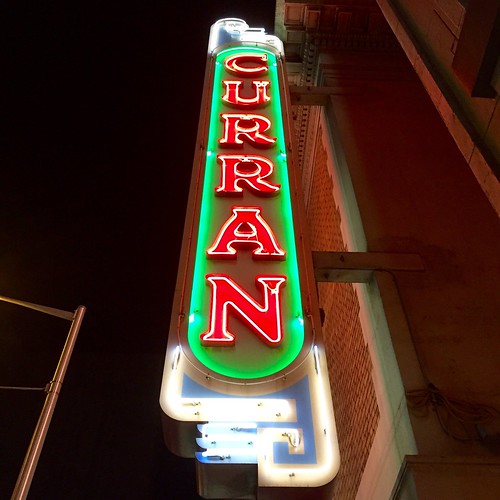 Carole Shorenstein Hays is doing something very exciting with the her jewel of a theater, the Curran Theatre. The 93-year-old neighbor to the Geary Theater in San Francisco’s Union Square neighborhood is undergoing refurbishment, but most of the improvements are happening front of house, which leaves the stage available. So Hays, formerly of Best of Broadway and SHN, has launched a performance series called Curran: Under Construction, which brings smaller but notable performances to the Curran stage, where the audience also happens to be seated. You enter through the famed stage door, which was used in the movie All About Eve, and enjoy an intimate theater experience on the stage itself.

The series opened this week with an astonishing British import: the Actors Touring Company production of The Events by David Greig and directed by the company’s artistic director, Ramin Gray.

Before the show began, as audience members found a seat on the risers facing out toward the empty theater, the most striking image was of the grand chandelier, usually hung high above the seats, was lowered to the level of the balcony as if for cleaning or, perhaps, simply to be admired. 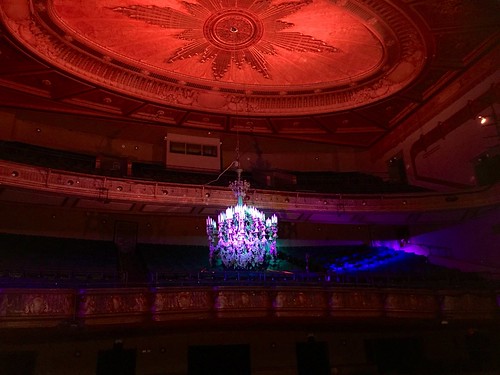 But as the show began, a curtain slowly rose to block out the theater and train focus on the long playing area where actors Lesley Hart and Clifford Samuel performed Greig’s powerful examination of a (fictional) mass shooting event in a church. We don’t find out all the details, and what actually happened is offered in bits as the 100-minute drama unfolds.

Sharing the stage with these astonishing actors is a choir. There will be three different choirs performing through the show’s short run through Saturday, Sept. 26, and for opening night, it was from Most Holy Redeemer Church under the direction of Victor Cervantes.

Almost instantly, we are pulled into the story by virtue of the show’s rawness. There is a lighting design and sound design and all the usual professional elements, but the overall feeling here is one of pure, raw theater, performed without veneer. The chorus on stage is used in many different ways, and their freshness to the material (they’re following along with scripts) adds to the sort of primal vitality of the experience.

The central character is Claire, a priest who runs a choir that happens to feature people of many different races and cultures. For that reason, the choir is named on a list decrying state-funded multiculturalism created by a racist politician. A troubled young man who admires the politician and his entirely backward stance on race and foreigners, singles out the chorus from the list, arrives with a gun and opens fire.

Claire survives the attack but feels like the events caused her to lose her soul. The show itself represents a deep dive into her stream-of-consciousness as she strives to regain that soul and to somehow come to terms with the killings and the killer himself.

Without being maudlin and without sacrificing humor, The Events delves into the human psyche to ask: why would someone do this and how does someone possibly recover from its destruction? It’s a heavy, heavy show, but it doesn’t feel that way. Perhaps it’s the music (by composer John Browne and music directed by Joe Bunker at the piano) or the sheer energy and commitment of Hart and Samuel that lifts the show and keeps it from feeling like a helpless freefall into the ever-present violence that so permeates our culture (especially in this country).

It’s a rich, moving experience, made all the more exciting for being the inaugural show in this Curran: Under Construction series. Construction has rarely been so enriching.

1 thought on “Curran Theatre roars back to vibrant life”