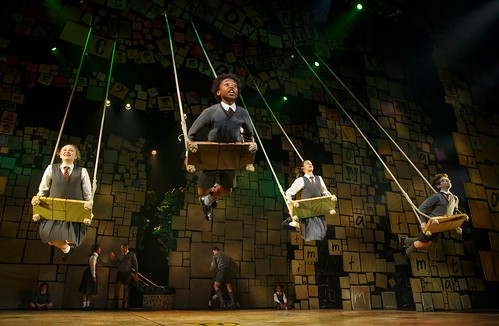 The young ensemble of the national Broadway touring company of Matilda the Musical makes the song “When I Grow Up” really swing at the Orpheum Theatre. Below: Gabrielle Gutierrez plays the triumphant pint-sized super hero, Matilda. Photos by Joan Marcus


What is it about Roald Dahl that makes his books so ripe for adaptation? Probably the most famous book-to-screen-to-stage example from his canon is Charlie and the Chocolate Factory, which became a beloved movie musical in 1971 (with the title shifted to Willy Wonka and the Chocolate Factory). The 2005 remake by Tim Burton is much less beloved, and the splashy 2013 West End stage musical has been a big, long-running hit and will hit Broadway in the upcoming season.

Others of Dahl’s stories have been turned into movies: James and the Giant Peach, The Witches and Fantastic Mr. Fox among others. Dahl’s rich imagination, edgy sensibility and ability to delight (and occasionally disgust) children without pandering to them makes his work ripe for adaptation. His 1998 novel Matilda became a movie in 1996, and an initial musical adaptation in 1990 went nowhere. But Matilda, it seems, was destined to be a musical. The Royal Shakespeare Company commissioned Australian actor-musiciain-comedian and Dahl fan Tim Minchin to compose the score and writer Dennis Kelly to adapt the book. The resulting musical, cleverly titled Matilda the Musical debuted in 2010, stormed the West End and Broadway (still running in both locations) and is now touring the U.S.

The greatest compliment you can pay to the musical is that it really feels like Dahl. It’s big and dark and bursting with grotesqueries, but it’s sweet at heart without being cloying. Minchin’s sharp, tuneful, highly enjoyable score is a major factor, and Kelly’s book hews closely to the novel but makes some smart tweaks along the way. Director Matthew Warchus wrangles the adorability of his child actors and lets them shine, especially amid the overplayed (and very funny) horrible adults like Miss Trunchbull, the meanest headmistress imaginable (she puts misbehaving children in mini-prison called “chokey”) and a former Olympic hammer-throwing champion. 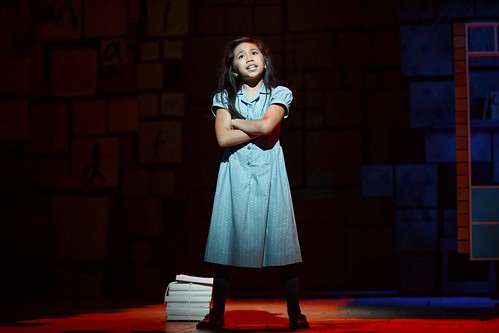 On tour, part of the SHN season at the Orpheum Theatre, Trunchbull is played by Bryce Ryness, who has the tremendous skill of underplaying and overplaying at the same time. It’s genius, and he gets laughs just from standing there in his Trunchbull drag (costumes are by Rob Howell, who also designed the set full of wooden letter blocks and tiles).

The trenchant thing about Matilda is that it’s a love story for two people who need each other but haven’t quite found each other or a way to be together. It’s not a romantic love story – more like a family of choice (as opposed to blood) in its nascent stage.

Our protagonist is precocious Matilda (played at Saturday’s performance by the unbelievably adorable Gabrielle Gutierrez, who alternates in the role with Mia Sinclair Jenness and Mabel Tyler), a 5-year-old with genius tendencies. She has taught herself to read and worked her way through Dickens. If she picks up a foreign novel, she teaches herself the language so she can appreciate the author’s work in her/his native language. A bright light in a dark world, Matilda has the misfortune of having been born to the Wormwoods. Mrs. Wormwood (Cassie Silva) is obsessed with appearance and ballroom dancing (her partner, Rudolpho, played by Jaquez Andre Sims is always good for a laugh). Her father, slimy used car salesman and all-around cheat (the marvelous clown Quinn Mattfeld), calls her “boy” because he so wanted a son he basically denies her very existence. Both Wormwoods are cretins who prefer “telly” and can’t understand why their child wastes time with books.

At school, Matilda fares no better under the tyrannical rule of Agnes Trunchbull, whose delight in torturing the students is as disturbing as it is entertaining (and occasionally hilarious). The only solace Matilda receives in the world comes from a kindly librarian (Ora Jones), whom Matilda regales with stories of daring do and tragic romance, and teacher Miss Honey (Jennifer Blood), whose pedagogical approach involves kindness and patience – the antithesis of the Trunchbull method.

Matilda really is a pint-sized super hero. She will liberate her fellow students, dispatch her family, make mincemeat of Trunchbull and make the world (or her world, anyway) safe for great books. At the height of her powers, she’ll even threaten to turn this story into Stephen King’s Carrie, but then she’ll find the home she deserves, all the while singing some catchy, zippy songs like “When I Grow Up,” “Naughty” and “Revolting Children.”

The only drawback to this touring production is a muddy sound design that, combined with some mushy British accents, renders only about 50 percent of the dialogue/lyrics understandable. The adults fare better than the children, but it’s a significant problem that’s only overcome by the strong acting, which puts the story over in spite of our inability to understand what’s being said or sung. That’s a shame because there’s a whole lot to enjoy here that’s not quite coming across.

[bonus interview]
I had a lively chat with Matilda composer Tim Minchin for a story in the San Francisco Chronicle. Read the feature here.