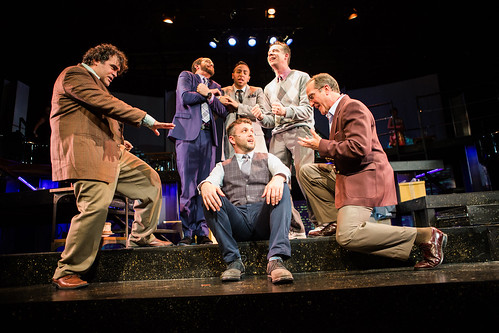 Robert (Keith Pinto, center) suffers his friends and their attempts to fix him up Stephen Sondheim and George Furth’s 1970 musical Company now at San Francisco Playhouse. Below: Amy (Monique Hafen) continues to have second thoughts as her fiancé Paul (John Paul Gonzalez) stands by. Photos by Jessica Palopoli


The summer musical Company at San Francisco Playhouse is good, not great, and that’s only disappointing because the show itself, with a score by Stephen Sondheim and a book by George Furth is absolutely great. An unusual musical, Company is constructed like a play made up of short, not necessarily connected scenes about marriage that are interrupted by songs, also about the pain (and some joy) of connubial “bliss.” It all comes together brilliantly and ends up feeling like a cohesive show. It was a revelation in 1970 and remains a high point of contemporary musical theater.

The really stellar part of this production, directed by Susi Damilano, is hearing the score played on twin pianos. Music director Dave Dobrusky is stage right and another pianist (Eryn Allen, Ben Prince and Michael Anthony Schuler are the rotating players) is stage left on the multilevel set (by Bill English and Jacquelyn Scott abetted by the giant Manhattan projections by Micha Stieglitz). The sound of the original 1970 production is so distinctive (those electric guitars!) from the original cast album that it’s often strange to hear the score played in other ways, but Dobrusky, using orchestrations by Jonathan Tunick, delivers a full, exciting sound that allows you to hear the score with fresh ears.

Keith Pinto is at the center of the marital maelstrom as Bobby, a perpetual bachelor whose married friends are celebrating his 35th birthday. Bobby Bubbi Robert Darling Bobby Baby (as his friends call him) is a tricky character. He’s a cad, a charmer and a cypher. He’s built up all kinds of defenses to keep the world at arm’s length, and his interaction with women tends to be on a wham, bam, temporary ma’am basis. He’s an inveterate third wheel in the world of his married pals – there are five couples who comprise his immediate circle – and for the couples, single Bobby serves as a sort of witness to their discord. Pinto plays Bobby’s warmth and his flaws expertly, and though Bobby as a character doesn’t come fully into his own until the end of the show (there’s never been a better epiphany song than “Being Alive”), Pinto shines in his solos leading up to the breakthrough, “Someone Is Waiting” and “Marry Me a Little.” 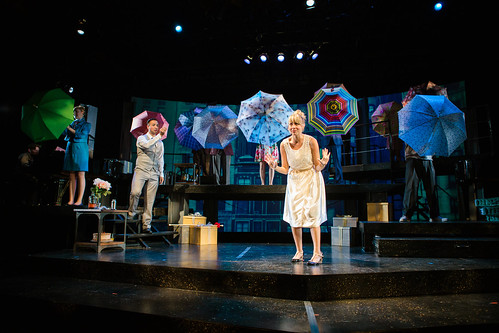 There’s been all kinds of talk through the years that the real story of Company is that Bobby is gay and hasn’t figured it out yet. That’s certainly interesting, and any production of the show that doesn’t set it in 1970 has to wrestle with that and the fact that there’s zero discussion of same-sex marriage. Damilano’s production is set now (Bobby has a smart phone), and a story he tells about getting lost on the way back to a hotel hook-up seems like it could easily have been solved by Google Maps. The show doesn’t feel dated exactly because the themes are universal and the writing is so incisive, but it definitely feels out of time.

In this production, Bobby is resolutely straight, and his married friends are all heteronormative (to use a trendy word). The most interesting among them is also the most neurotic: Amy, nicely played by Monique Hafen, basically has a nervous breakdown in her tongue-twisting solo “Getting Married Today” and then has to deal with the consequences. Another of Bobby’s friends, Joanne, never met a cocktail she couldn’t seduce, and as played by Stephanie Prentice, she’s brittle and damaged. Prentice’s “The Ladies Who Lunch” is a powerhouse, and in the context of her scene – she’s just gone on a rant and then shifts into vixen mode – it’s a beautifully calibrated performance.

Morgan Dayley is sweet, funny and dippy as April, a flight attendant who dallies with Bobby, and their scene is another highlight leading into a darkly funny “Barcelona.” A standout song in a score that’s full of them is “Sorry-Grateful,” one of the best songs ever written about marriage, is affectingly performed by a trio of husbands: Christopher Reber, Ryan Drummond and Richard Frederick.

The big dance number, “Side by Side by Side/What Would We Do Without You?,” has some spark to it, but the choreography by Kimberly Richards feels disconnected from the characters and their relationships. For instance, after the cast has been twirling canes in a vaudevillian way, they discard the canes by dumping them in Bobby’s arms. That’s a great image that seems like it’s going somewhere, but then it doesn’t. And she has Bobby prancing around the stage like the Emcee in Cabaret and that feels remarkably out of sync with the character.

Thankfully this is not a dance show. Director Damilano exerts a strong influence over the book scenes, and most of them have real edge. The issues and emotions of those scenes is then magnified by the music, which remains this production’s strong suit from the moment the phone rings, door chimes and in comes company right through to the moment Bobby realizes alone is alone, not alive.