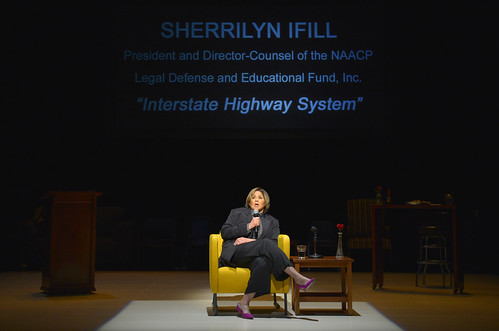 Playwright, actor and educator Anna Deavere Smith is Sherrilyn Ifill, president and direct-counsel of the NAACP, one of many characters she plays in Notes from the Field: Doing Time in Education, The California Chapter, a one-woman show featuring stories about California’s devastating school-to-prison pipeline. Below: Smith plays Kevin Moore, videographer of the Freddie Gray beating. Photos courtesy of kevinberne.com


If you’ve ever seen a show by our foremost docudramatist, Anna Deavere Smith, you know the power she has over an audience. She conducts extensive interviews on her chosen topic, then she re-creates portions of those interviews an a cannily crafted show that is theatrical in its presentation and righteous in its political and emotional power. She makes her audience think, feel and converse for days (and beyond). Now, with Notes from the Field: Doing Time in Education, The California Chapter at Berkeley Repertory Theatre, she is going even further. She’s turning her show into a full-blown seminar.

In so many ways this show is attempting to be more than a show. For instance, you don’t get a traditional program. You get an accordion-fold “toolkit” full of information, resources and social media connections (#NotesFromTheField). Smith performs for a solid 80 minutes, and then there’s an abrupt shift in Act 2 when the audience breaks into small groups situated in every corner of the Roda Theatre for a 25-minute, facilitated discussion about identifying what change looks and feels like and how people can commit to helping that change come about. In my group (backstage, which was fun), we had 15 people, a facilitator named Peggy, excellent snacks (Tcho chocolate and animal crackers) and an intelligent, heartfelt (if rushed) conversation about issues that had come up in the play. The discussion itself wasn’t world changing, but this notion of theater as civic engagement – we’re already in the room together, why don’t we take our interchange to the next level? – definitely is. 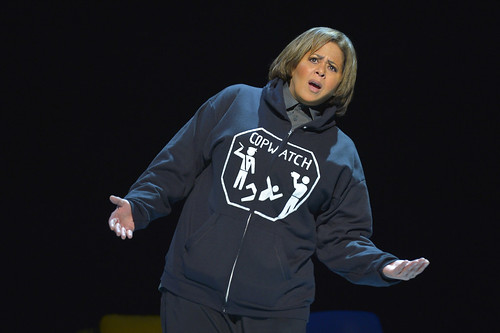 After the discussion, audience members head back to their seats for the 25-minute conclusion of the play, which is still a work in progress. Smith has compiled interviews from Baltimore and Philadelphia and is adding in the California contingent. Being unfinished is hardly a problem when you have a writer/performer/educator of Smith’s caliber. She offers her trademark style of inhabiting each character and mimicking their voices down to every pause and stutter. In her compilation of interviews, which focus mainly on experts in their field and real people (there’s only one politician represented, and he’s a councilman in the trenches of Stockton), so it’s not like she’s falling into that modern news trap of “fair and balanced” coverage, forcing commentary from both sides. Nor is she banging us over the head with her research and pushing her conclusions in our faces. Slowly and steadily she creates a composite of the overarching issues and gives us precise, intimate details from lives being lived in ways that illuminate those issues.

Among the people she so expertly represents (the production is directed by Leah C. Gardiner and features live bass accompaniment by Marcus Shelby) are a man from the Yurok tribe in Northern California who is an excellent example of the poor public education pipeline to prison; education philosopher Maxine Greene (who died last year); a mentor from Oakland; the young man who shot video of Freddie Gray’s violent arrest in Baltimore; one of the more visible protesters from the ensuing Baltimore riots; and a UCLA professor who notes that in stepping over or ignoring the mentally ill homeless people in our paths, we should really stop to consider “Who’s really mentally ill?”

The most powerful characters come as a trio from Philadelphia toward the end of Act 1. First is an “emotional support teacher” who does the best she can but feels completely inadequate to deal with the dysfunction and damage among her students. She recounts an interaction with an out-of-control 11-year-old that is devastating.

Then we hear from a judge who, in sentencing a troubled young man to prison at 19, admits defeat and tells the young man – before sentencing him for crimes to which he pled guilty – that the system had utterly failed him by not providing him a safe place and a good education. And finally is a school principal, the first in her family to go to college, who demands that her students experience the world and push beyond the limitations of their circumstances. She’s one person battling valiantly in an all-out war that, frankly, seems impossible to win, but she offers hope that it can be done.

There’s a lot of hope and compassion in this show amid all the depressing glimpses of the reality our society has created with its choices of where to invest time, energy and money (prison!) and where not (education! mental health! poverty!). The overall effect of Notes from the Field is hopeful. Anna Deavere Smith is doing what she can do and doing it incredibly well. We are called upon to commit to a single action to help make change, and that’s a hopeful directive as well. But the biggest take away comes as you exit the theater full of emotion and information and with the enthusiasm to, as one of the characters puts it, step into “wide awakeness.”