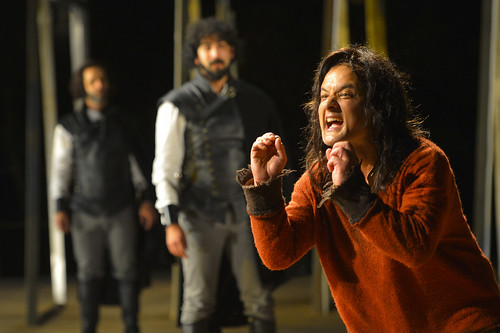 The cast of California Shakespeare Theater’s Life Is a Dream by Pedro Calderón de la Barca includes (from left) Kaiso Hill as Ensemble, Jason Kapoor as the Soldier and Sean San José as Prince Segismundo. Below: Amir Abdullah is Astolfo and Tristan Cunningham is Estrella. Photos by Kevin Berne.


There’s so much talk about nature and stars in Life Is a Dream that it seems perfectly natural to be sitting outside on a temperate summer night watching Pedro Calderón de la Barca’s 1635 play about thwarting destiny and connecting to the deepest truths of human existence.

California Shakespeare Theater’s production of Dream, a beautiful if thorny play, offers the chance to see a work that is all too rarely performed (in my 25 years of writing about theater in the Bay Area, this is the first production of it I’ve seen). Considered one of the treasures of Spain’s “Golden Age,” Life Is a Dream has a Shakespearean feel in its mix of fantasy, soap operatics and complex humanity. In its original form, the play tends to be florid and rather convoluted. The Cal Shakes production, directed by Magic Theatre Artistic Director Loretta Greco, employs a lean translation/adaptation by Nilo Cruz, a Pulitzer Prize winner for Anna in the Tropics. The new script doesn’t solve all the play’s problems, but it strips the work to its essence and offers a spare but still poetic rhythm that adds lyrical grace to the machinations of the plot.

The ever-remarkable Sean San José plays Segismundo, a prince whose fault was in his stars. At his birth, all signs (and celestial portents) pointed to him becoming a tyrant who would destroy his kingdom. So the King (Adrian Roberts) decided to re-write fate by imprisoning the child for life, chaining him in a desolate cell and thereby, presumably, saving the country from his wrath. 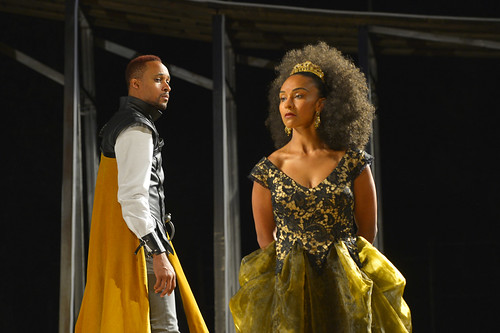 When the play begins, Segismundo rattles his chain in a metallic prison (set by Andrew Boyce), lamenting the loss of the liberty given to birds and streams. San José is as compassionate as he is forceful – clearly this character is an intelligent, sensitive human being who has been treated like a monster his entire life.

This is the crux of Dream. Is Segismundo destined to be a wretched ruler no matter what? Or can he exert control over his fate and prove the portents wrong? Are human lives mapped out from the start, or is there really such a thing as free will?

All of that is interesting, but the aspect of the play that really crackles is the titular notion of life as a dream. When Segisumndo is released from bondage and put on the throne, his barbarism comes through, and he is thrust back into prison. His keepers try to convince him that his brief time on the throne was only a dream, and that gets him thinking about how life really is only a dream. The thin glass that separates waking and dreaming may be more permeable than we know, so why not throw off expectations and chains (physical or metaphorical) and live life with gusto. Like a dream, it will be over sooner than we know.

San José’s final soliloquy, delivered from the roof of his cell while beckoning to the wide-open sky, is remarkable and emotionally stirring.

Other aspects of the play provide entertaining but uninvolving court drama. There are two love interests for Segismundo, Estrella (Tristan Cunningham) and Rosaura (Sarah Nina Hayon), and he ends up with the wrong one because of courtly rules of honor, and the character of King Basilio, though sturdily played by Roberts, never seems anything more than an insecure ruler who may or may not regret his treatment of his son. There’s a visiting prince (Amir Abudllah) who treats women badly and then pisses off Segismundo, but he’s also more functional than fascinating.

Of the supporting characters, only the jester/clown Clarin (Jomar Tagtac) and the jailer Clotaldo (Julian López-Morillas) resonate on a deeper level.

Played out on a set that looks like a section of roller coaster track with internal lighting reminiscent of a Laughlin casino, this Dream belongs to San José’s Segismundo, a man who learns from dreams a powerful way to live his life.

1 thought on “Cal Shakes dreams a Dream under the stars”