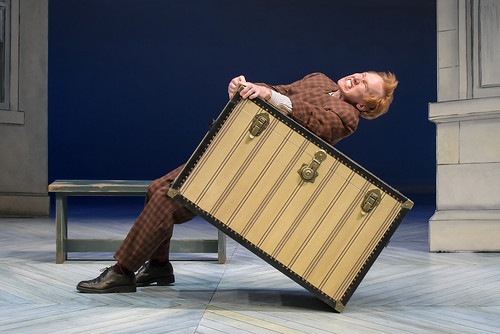 
Francis Henshall may be one sandwich short of a picnic, as they say, but that’s one of many reasons One Man, Two Guvnors is so much fun. Francis’ hunger literally drives the first act’s zaniness, and truth be told, once that hunger is satisfied, the farce loses a bit (but certainly not all) of its oomph. Thankfully there’s a perky skiffle band on stage to keep things bouncing along.

Oh, if only all adaptations could be this fun. When playwright Richard Bean decided to pull Carlo Goldoni’s 18th-century comedy into a specific time and place in the 20th century – Brighton, England, 1963 – he did so with an eye to heightening and broadening the comedy from its Venetian origins. Inspired by stock commedia dell’arte characters, we get low-grade hoodlums, charming murderers, girls disguised as boys and a central clown who just wants some fish and chips (or anything edible for that matter).

A massive hit for London’s National Theatre in 2011, Bean’s Guvnors transferred to the West End and then to Broadway, where it scooped up a bunch of awards for its prat-falling, audience-engaging goofiness.

The swaggering, swinging, singing show is finally filtering down to the provinces, and now we have a bright blast of a West Coast premiere at Berkeley Repertory Theatre in a co-production with South Coast Repertory. Director David Ivers and a robust, rowdy cast elicit abundant laughs for more than 2 1/2 hours. 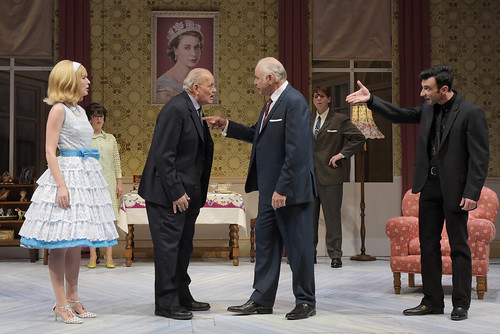 At the center of the party is Oregon Shakespeare Festival staple Dan Donohue as Francis, the hungry clown who finds himself working for two masters – one a woman disguised as her murdered twin brother (Helen Sadler), the other an overgrown schoolboy of a Lothario on the lam after knifing rival (William Connell) – all so he can afford to buy himself some mushy peas. Donohue is part Conan O’Brien (the ginger part), part Peter Sellers, part VW full of circus clowns (all of them). He’s adept at the physical comedy (his attempt to lift a trunk is surpassed only by the fistfight he gets into…with himself), but he’s also a wonderful actor and makes Francis endearing in his stupidity and hunger (as a Martin Short fan, I also saw a fair amount of Ed Grimley in this Francis as well).

Though Donohue offers a dynamic star turn, he’s really part of an intricate, carefully calibrated comedy machine. The whole cast – decked out in marvelous early ’60s garishness by costumer Meg Neville – works effectively as a team to bust guts and keep the momentum rolling to the clap-along, sing-along ending. The house band, called The Craze, provides pre-show, intermission and post-show merriment (not to mention during-show interludes) with songs by Grant Olding that evoke a mildly famous skiffle quartet from that era. From Liverpool I think. Various cast members get a chance to take lead vocals, and the music adds a little extra carbonation to the lager of the comedy.

Ron Campbell, one of our great local comic actors, is priceless as Alfie, an ancient waiter who never met a staircase he couldn’t tumble down in the most hilarious fashion, and Danny Scheie, another local comedy genius, makes the most of his turn as waiter Gareth (including a pre-show announcement that sets the tone for the evening). Sarah Moser as Pauline bravely lives up to the character’s description of being “pure innocence, unsoiled by education…like a new bucket.” And Claire Warden as Dolly a savvy bookkeeper with a taste for Francis’ antics, is as sexy as she is smart and funny.

Audience members in the orchestra have reason to fear, for there is audience interactivity. Donohue’s Francis magically breaks the fourth wall (he’ll happily tell you all about how great it feels), and he’s unafraid to ask the audience questions and expect an answer. I know some audience members felt a little punked by Francis’ shenanigans, but it’s all in good fun and adds the evening’s feeling of general revelry where anything can happen, and the audience is going to be part of the mayhem.