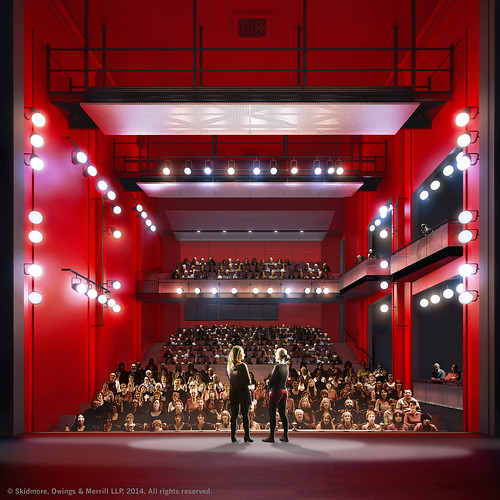 
A vermillion treasure inside and out, American Conservatory Theater’s new Strand Theater on Market Street is – or should be – the future of San Francisco. This beautiful city is in crisis at the moment, the crisis known as boom, and its character is fading visibly each day. Our diversity, our artists, our culture disappears a little more with every swing of a giant construction crane as gazillion-dollar condos and apartments crowd the airspace.

City government’s slow reaction to this crisis of rampant success means we have lost people and organizations we’ll never get back. Galleries, theater companies, artists, families, musicians, dancers, actors gone, and with them, a piece of what made San Francisco special. And how have our fearless leaders responded in offering assistance to the evicted, the rent increased, the displaced, the creative, the non-tech zillionaires? A shrug and a promise of “meh.” 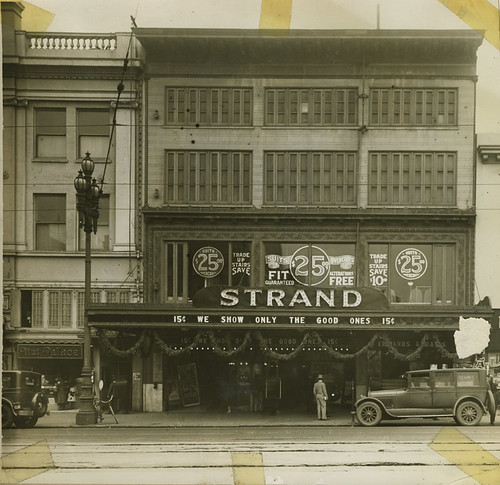 Then big tech came a-calling. Twitter, Uber and Square moved in. ACT tested the mid-Market waters with a flexible black box theater space in what had heretofore been their Costume Shop just a few doors away from the STrand. And then, the long-held ACT dream of a second stage came to fruition. Ground was broken on the Strand project in fall 2013, and less than two years later, with a hefty bill of $34 million, a theatrical jewel reemerged, possibly better than it ever was before.

As ACT Artistic Director Carey Perloff exclaimed in a recent tour for members of the press, the idea behind the space was to make it easy for people to experience theater and make the space welcoming for all. Working with architects from Skidmore Owings & Merrill (Michael Duncan lead architect), the Strand succeeds on both counts.

The building feels accessible from the moment you walk in (BART and MUNI stations are right outside, the Orpheum Theatre is kitty corner, the F Market trolley rumbles by regularly). The two-story, open-air lobby is dominated by a giant electronic screen, the likes of which you see at rock concerts or in Disneyland, and the ghost of the former marble staircase is etched into the floor. Because one of the original cement walls is visible (you can see the grade of the original balcony), the space feels both old and new at the same time. There’s a bar/café in the lobby as well as a ticket office, the interior of which is the vermillion hue that decorates the outside of the building and, it turns out, the inside of the theater as well.

The main theater space holds 283 seats, though the house can be reconfigured into cabaret seating for 175. There’s a mezzanine and a balcony, but nothing feels too far away from the stage (in fact, no seat is further than 52 feet from the stage). The sound feels warm and intimate, which promises quite a different theater experience than you get at ACT’s other theater, the imperial Geary. 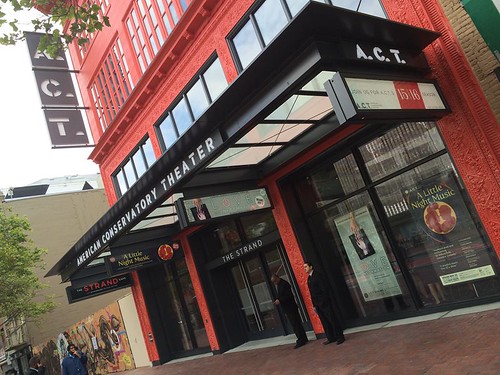 Upstairs there’s a second space, a flexible room called The Rueff, which on the day of the tour, was being used in the evening for an ACT dinner gathering with a small stage for entertainment, but any other time the space could be a classroom or a performance space that seats up to 140. The windows overlook UN Plaza and City Hall (Hello, Mayor Lee! This is the beginning of what a real arts district could look like! Mayor Lee? Hello?), but with the press of a few buttons, sun shades come down and then full blackout shades. Voila, a black box suitable for rental to other theater companies (already happening), for Tenderloin public school students (already happening) or ACT MFA or Young Conservatory students (already happening).

The best kind of arts development is one that invites others in – other artists, other companies, other groups that add to the richness and vitality of the space. This is an ACT building to be sure, but clearly the point is to be inclusive and for ACT to jump into the rental income stream. That’s all good and healthy and provides jobs for artists and the artist adjacent and gives audiences a place to be excited about and visit often.

I’m not privy to the kinds of hoops the City made ACT jump through to get this building built, but I’m sure there were many and they threatened to derail or degrade the project – such is the building of anything here. The City of San Francisco should be begging arts companies to ply their trades along Market Street. The implosion of a proposed arts complex at 950 Market is disastrous in many ways, not the least of which is that it could have been an eastern anchor for the arts district with the Strand to the west. Every viable company that was interested in 950 should be encouraged and funded (in part or in whole) by the City to be part of the Market Street renaissance. If the Strand is any indication, Market Street could be the grand boulevard it should be and all the evidence we need to prove that San Francisco values the arts as much as it should and that our leaders have what it takes to allow this city to boom while its native culture flourishes.

That is not happening now, and that leadership has not asserted itself, but with the Strand as a shining example, we can begin to experience just how extraordinary a Market Street Arts District could – and should and will – be.

FOR MORE INFORMATION
The first show in the Strand is Caryl Churchill’s Love and Information, which begins performances June 3 and runs through Aug. 9.
There’s a community open house at the Strand on Saturday, June 13 from 9 a.m. to noon.
Visit www.act-sf.org for more information.

2 thoughts on “ACT’s Strand Theater: the new jewel of mid-Market”