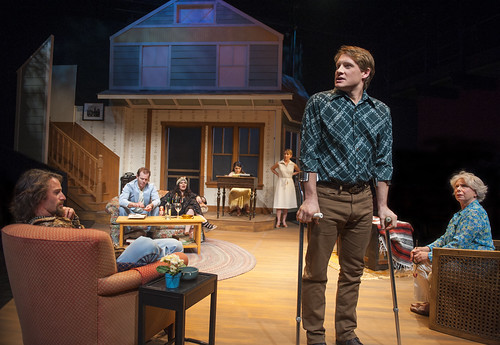 
It’s easy to imagine how, in 1978, Lanford Wilson’s Fifth of July was remarkable for several reasons. It featured a loving gay couple at the center of its family-friend-reunion plot and didn’t make a big deal about it. That’s not what the play is about, but the couple and their relationship are as important as any other on stage. Also, the play wrestles with the repercussions of the 1960s anti-war movements and how all that passionate activism evolved, and in many cases, dissipated into the ’70s.

Some have compared Wilson to Chekhov, and it’s easy to see why – a large group of people at a country house (in this case, it’s a 19-room house in Lebanon, Missouri) musing on how they find themselves older and atop a heap of broken dreams. But the comparison really ends there. Wilson’s characters are very much the product of their time, which leaves Fifth of July feeling rather dated and, in the current Aurora Theatre Company production, rather dull.

It’s unfair to compare the play (which was produced on Broadway in 1980) with The Big Chill, which came out in 1983, but while watching the Aurora production, I couldn’t help thinking about how similar they are and how much more fun the movie is. But Wilson was first, so he should get credit, even if Fifth of July creaks more often than it should (a paternity subplot is downright deadly).

The central issue with director Tom Ross’ production is that it feels entirely surface. There are good actors in the cast working hard to break through the veneer of people playing ’70s dress-up, but that shiny surface never cracks. So if there are depths to this play, they are not visible here. And what is visible is only fitfully interesting. 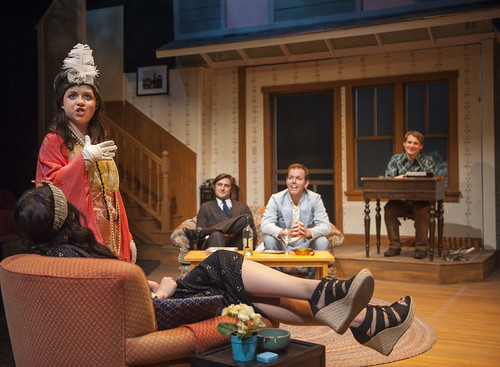 Craig Marker is Ken Talley, a Vietnam vet who lost both of his legs in battle. Ken and his lover, Jed (an understated Josh Schell) are at the Talley family home for the summer, though Ken is there most of the time, while Jed lives in St. Louis. They are joined by assorted family and friends for the Fourth of July weekend. Ken’s sister, June (Jennifer LeBlanc), and her daughter, Shirley (Oceana Ortiz), are also there, as is their Aunt Sally (Elizabeth Benedict), whose senior years are threatening to take her to California and the kind of life she’s not much interested in.

Also in the house are old friends of Ken and June’s from their wild, cocaine- and protest-filled UC Berkeley days, Gwen Nanci Zoppi) and her husband, John (John Girot), and a strange hippie-ish musician named Wes (Harold Pierce) who is going to help Gwen become a country-western star. It’s an eclectic lot, and Wilson doesn’t really give them much to do. Ken’s struggle to move on with his life and adapt to a different body and world is the most compelling component of the story, and Marker makes Ken likable even if he never quite discovers the darker shades under Ken’s attempts at good humor. The scene stealer here is Benedict as Aunt Sally, who, in the second act, comes as close as this production gets to being lively.

LeBlanc, a superb actor, does what she can with a woefully underwritten role, and Ortiz has to contend with some of the least believable dialogue ever written for a teen character. Many of the actors have a good moment or two but seem adrift and unable to really make a strong connection with the play or the audience.

Set designer Richard Olmstead gets points for building an enormous house in the tiny Aurora space and then takes us from inside the house in Act 1 to outside in Act 2 – no small feat in such a limited space.

But then again, maybe the size of this show is part of the problem. The Aurora is an up-close-and-personal space, and it’s entirely possible that Fifth of July, heralded by many as an American classic, works best from a distance and suffers in close-up.