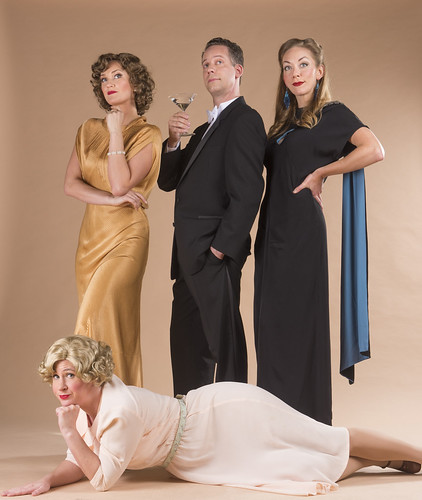 The cast of 42nd Street Moon’s Nick & Nora includes (from left) Brittany Danielle and Ryan Drummond as Nick and Nora Charles, and Allison Rich (right) as actress Tracy Gardner and Nicole Frydman (reclining) as murder victim Lorraine Bixby. Below: Danielle’s Nora is charmed by William Giammona as Victor Moisa, much to the chagrin of Drummond’s Nick. Photos by David Allen


The greatest crime the musical Nick & Nora seems to have committed in its ill-fated 1991 debut was not being nearly as good as it should have been and not being nearly the catastrophe everyone had imagined. The notorious musical is based on Dashiell Hammett’s final novel, The Thin Man from 1933, which was turned into the more memorable series of Thin Man movies starring William Powell and Myrna Loy as soigné sophisticates Nick and Nora Charles, who also solve crimes.

Nick & Nora has not been fully produced since its Broadway demise (72 previews and only a week of performances following the disastrous reviews), which is why we love 42nd Street Moon, the company that dusts off the flawed, forgotten and factious musicals of old and allows a contemporary audience to see what’s actually there. Sometimes these shows fell through the cracks for good reason, but more often there’s something surprising or gem-like to unearth in their resurrection.

Moon’s production of Nick & Nora does not reveal an unjustly maligned masterpiece, but it is great fun – exuberantly produced with a game cast directed by co-artistic director Greg MacKellan. One of the most common reactions to the original Broadway production seems to have been “well, it wasn’t as bad as they said it was,” and that is, perhaps, the worst kind of review. Not only is the show not good, it’s not the delicious debacle that can be just as fun (if not more so) than a masterwork.

No, Nick & Nora is an inherently flawed show with moments of charm, humor and even beauty that fails to make a case for itself as a work of art independent of the novel and the movies (and the radio show and the subsequent TV series and assorted rip-offs). The one thing I kept thinking over and over while watching the nearly three-hour show is, “This gives me a whole new appreciation for just how good City of Angels is.” That jazzy show is also set amid the glamour and backbiting of Hollywood in the early mid-20th century, but it’s got style and high concept and a score that won’t quit. 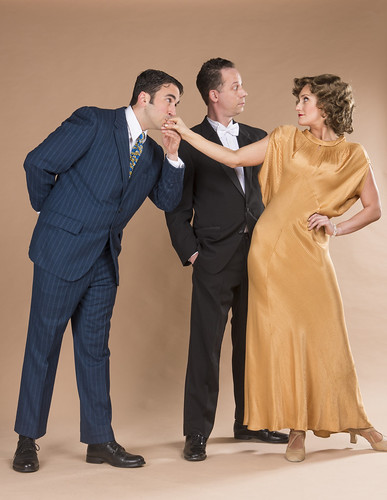 It’s understandable that expectations would be high for Nick & Nora. It’s director and book writer, Arthur Laurents, wrote what is arguably the greatest musical of all time in Gypsy and has other shows like West Side Story and La Cage aux Folles on his lengthy and distinguished resumé. Composer Charles Strouse had huge success with Bye Bye Birdie and Annie, and lyricist Richard Matlby Jr. made a splash with his Richard Maltby collaborations Baby and Closer Than Ever and then with his lyrics for Miss Saigon. That’s the kind of creative team that looks good on paper, but on stage, there’s no real magic. These are all artists capable of great work, but the spark of inspiration seems to have bypassed this endeavor entirely.

Still, Nick & Nora has a sort of clunky, old-fashioned charm, which director MacKellan emphasizes in his enjoyable production. Ryan Drummond and Brittany Danielle in the title roles have abundant charm, but what’s nice about their downplayed performances is that they also come across as human beings and not Art Deco archetypes of crisp, urbane repartee. The show’s creators, however, have not done a good job of conveying who Nick and Nora are in their songs or convincing us that these blithe crime busters should be singing and dancing. Laurents introduces marital discord into the mix, which seems wildly off base, especially when he’s already juggling a complicated murder mystery in which every supporting character seems to be a suspect. On Broadway there was an actual dog playing famous sidekick Asta, but this production keeps the canine offstage.

The show’s one bold theatrical touch is having murder victim Lorraine Bixby (played with brio by Nicole Frydman) continually back from the dead to reenact key moments of her tumultuous life and death. She also gets the score’s best song in the funny and rousing “Men.” Lorraine was a movie studio bookkeeper with secrets and potentially destructive gossip. Many had a motive to see her silenced, including the Hepburn-esque actress Tracy Gardner (the robust Allison F. Rich), the crooked producer (Michael Kern Cassidy), the corrupt detective with a foot fetish (Michael Barrett Austin), the embezzling director (Brian Herndon), the slick union chief (William Giammona) and the highly protective wife of the producer (the invaluable Cindy Goldfield). There are other players as well, including the surprisingly drawn racial stereotypes (the show is set in 1937 but was written in the ’90s so there’s really no excuse) of a Mexican entertainer and a Japanese house boy.

The talented cast makes a good case for Nick & Nora as a show that deserves another look and perhaps a longer life in community theater, but it’s also easy to see why this Broadway misfire – stuck in that purgatory of “not so bad/not so good” – has lain dormant for nearly a quarter of a century.

[with thanks to the marvelous George Maguire for the headline]