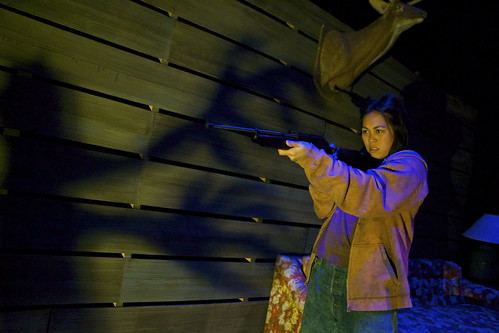 Nicole Javier is Edith, the title character in A. Rey Pamatmat’s Edith Can Shoot Things and Hit Them, a Crowded Fire Theater production at Thick House. Below: Maro Guevara is Benji and Wes Gabrillo is Kenny, two 16-year-olds finding their way in the world. Photos by Pak Han


Think of A. Rey Pamatmat’s Edith Can Shoot Things and Hit Them as sort of a ’90s “Peanuts” strip come to life. Sixteen-year-old Kenny is like Charlie Brown, the weight of the world on his shoulders and frustration abounding. Twelve-year-old Edith is Kenny’s younger sister, so that makes her Sally (and so does her sassy confidence). And Kenny’s classmate Benji is Linus (with a little Schroeder mixed in), and instead of a security blanket he has a security mommy. There’s even a giant stuffed frog named Fergie that could be considered Snoopy-esque. Those are the similarities, and here are the differences: Charlie and Sally Brown have essentially been abandoned by their parents to fend for themselves on a farm, and Charlie Brown and Linus are in love.

The “Peanuts” comparison is apt here if only to convey the tone of Edith, which has mature actors playing tweens and teens. There’s a very grown-up feel to this tale of children, and that’s partly because Kenny and Edith are being forced to grow up much faster than normal. After their mother’s death, their physician father withdrew to the point of absence, leaving Kenny to assume the role of parent. Not to be outdone, plucky Edith decides to be the protector of her family. Armed with her stuffed frog and a BB rifle, she patrols the property and vows to quell any threat with her precision marksmanship. Sometimes their dad remembers to put money in their bank account (the kids have ATM cards) and sometimes he doesn’t. Still, they manage to cook and (occasionally) clean and go to school. They’re more than surviving, but it’s a terrible situation. 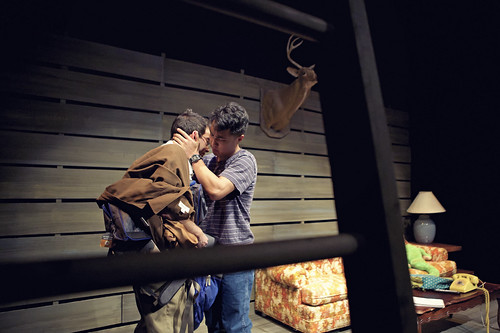 With only a trio of actors – Nicole Javier is Edith, Wes Gabrillo is Kenny and Maro Guevara is Benji – the focus of Pamatmat’s comic drama is tight. The set by Deanna L. Zibello is dominated by the rustic farmhouse, but other areas of the stage expand the action to the barn, school, an ice cream shop and other locales. It’s unclear exactly how long Kenny and Edith have been fending for themselves, but it’s been long to become routine (as has the scraping by when they run out of money and food).

Rather than being traumatized by their lot, Kenny and Edith maintain some level of youthful spirit. Edith, more mature than her 12 years, has tremendous gusto, and though lonely, she’s got a fighting spirit. Kenny is not only being the adult in the family but also maintaining good grades in his high-level high school courses. In one of his advanced math classes he met Benji, a nerd’s nerd whose mother still picks out his clothes. Now Kenny and Benji have moved beyond being study buddies and are enjoying their sexual awakening together. One of many interesting aspects of Edith is that this burgeoning relationship isn’t the center of attention. Though the boys’ relationship has adverse effects on some of the people around them (especially Benji’s tie-loving mother), they’re pretty confident, happy and healthy in their mutual attraction/affection.

The first act of this nearly 2 1/2-hour play gains momentum (both comic and dramatic) and pulls us deeply into the lives of these characters, each of whom we come to love. There’s a terrific crescendo and then after intermission, the play never regains that sense of drive and depth. It remains tender and sweet and we never stop caring about these kids, but the play ultimately feels too long.

Director Desdemona Chiang counters these longueurs with strong, finely detailed work from her actors. Gabrillo’s Kenny is heroic in his love for his sister and his willingness to open his heart to Benji. And Guevara as Benji is just about as note perfect as he could be as he continually subverts the stereotype of major dweeb with flashes of sensuality, humor and compassion. Javier as Edith has a taller order. As the youngest kid, she has to straddle that chasm between childhood and adulthood and not give one of those annoying “adult playing widdle kiddle” performances, which she studiously avoids. Edith is a firecracker, and if Javier doesn’t fully give us the darker, deeper shades of the character, she certainly delivers on ferocity, intelligence and emotional volatility.

Edith Can Shoot Things and Hit Them could wallow in the potentially disastrous situation these children find themselves in (and it is strange that even with interfering neighbors Child Protective Services is never alerted), but playwright Pamatmat is more interested in the resilient spirit of these young humans. Theirs is not exactly the story of triumph, nor is it tragedy. In the world of realism – good grief! – that counts as a happy ending.

FOR MORE INFORMATION
A. Rey Pamatmat’s Edith Can Shoot Things and Hit Them continues through March 21 in a Crowded Fire Theater production at Thick House, 1695 18th St., San Francisco. Tickets are $15-$35. Call 415-746-9238 or visit www.crowdedfire.org.