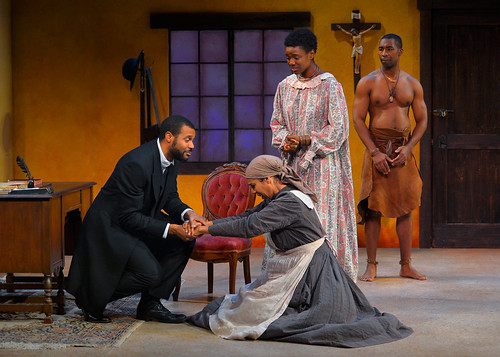 Chilford (Jabari Brisport, left) is thanked by Mai Tamba (Elizabeth Carter, kneeling) and her niece Jekesai (Katherine Renee Turner) after he accepts Jekesai as his student and servant in exchange for her conversion to Catholicism. Mai Tamba’s son Tamba (JaBen Early, at rear) has serious doubts in the Bay Area premiere of Danai Gurira’s The Convert at Marin Theatre Company. BELOW: Prudence (Omoze Idehenre) gives the re-named Ester (Turner) advice about her studies in the language, religion and customs of the English settlers. Photos by Kevin Berne


For someone who kills zombies in her day job, Danai Gurira sure knows her way around a compelling drama. Best known as the kick-ass, Katana-wielding Michonne on AMC’s “The Walking Dead,” Gurira is also a playwright, an impressive one as it turns out based on her Bay Area debut with The Convert now at Marin Theatre Company.

This is a good, old-fashioned historical drama – three acts and nearly three hours – about the soul-crushing damage of colonialism and missionary zeal. What’s interesting is that The Convert is the second play to open in the Bay Area recently specifically addressing the colonizing of Africa by Europeans. In Just Theater’s We Are Proud to Present… (read about it here), it’s about Germans (and later the British) in Namibia in the late 19th and early 20th centuries. In The Convert, we’re dealing with the English running roughshod over Rhodesia (modern day Zimbabwe) in the late 19th century. Both stories, perhaps needless to say, end horribly for the native Africans.

Gurira’s Convert finds a land at the breaking point. The British, Dutch and Portugese have had a profound effect on local culture, the Shona people, seizing land and forcing many of the men to work in diamond mines for paltry pay and wreaking havoc with the native spirituality by aggressively converting Shona people to Christianity. Rebellion against the settlers began in the 1890s – when The Convert is set – and continued into the 1960s. 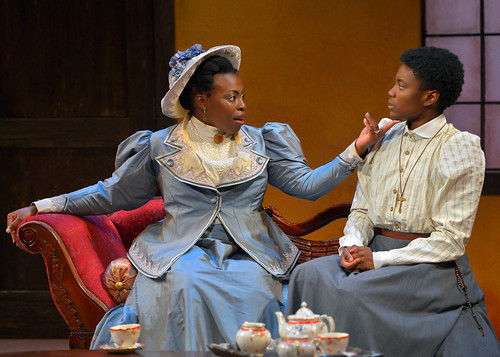 The title character is Jekesai (Katherine Renee Turner), a Shona woman who speaks no English but is in need of help from a local missionary, an African convert named Chilford (Jabari Brisport), who will save her from entering into an arranged marriage with a much older man is she agrees to open her heart to Jesus. Coached by her aunt, Mai Tamba (Elizabeth Carter) to say yes to anything the missionary says, the young woman begins her conversion as a means of protection, but her agile mind and ferocious spirit are soon caught up in her conversion for real. She learns to speak English and becomes Chilford’s right hand when it comes to bringing locals into the church.

Colonialists and missionaries, it turns out, are blinded by a similar affliction: 100 percent certainty that everything they think and do is right and that the world owes them. The profound disrespect they show to “savages” has disastrous ramifications for all involved, not to mention the land, the cattle and anything else that can be thoughtlessly pillaged for profit. Gurira’s play is fueled by the conflict of traditional culture and spirituality being overtaken by foreign culture and spirituality. Jekesai, who is renamed Ester, represents the locus of the conflict, but Gurira gives us another fascinating woman who is torn in a different way.

Prudence (Omoze Idehenre), a Shona woman, was not only fully educated by the British, she turned out to be smarter than most of her teachers and is now more convincingly British than they are. She has a crisp accent and a powerful vocabulary, and she’s set to marry a local bigwig, the African Chancellor (Jefferson A. Russell). The interesting thing about Prudence, outfitted in starchy, confining British styles (costumes by Fumiko Bielefeldt) is that she acutely feels how thoroughly she has turned her back on her own culture and people. She still speaks the local language when she can and encourages Ester to do the same. She’s also smart enough to know that what now separates her from her people will ultimately fail to connect her to the Europeans. She’s in between cultures and will likely be rejected by both.

Director Jasson Minadakis and his superb cast fill Nina Ball’s simple missionary home set with drama that comes from sharply defined characters and well-defined historical conflict. Turner as Jekesai/Ester is stunning, as is Idehenre as Prudence. Their characters are vivid and powerful and rich they almost need no supporting cast at all. But the supporting cast, which also includes JaBen Early and L. Peter Callender representing Shona men who resent the European influence and are preparing to to something about it, provides complex human beings rather than cardboard historical cut-outs.

It’s a bold move in our world of contemporary drama to present a long, three-act play. When so many playwrights are moving toward 90-minute (or less) one-acts, it’s refreshing to see a playwright go bold. The advantage of a three-act structure is the opportunity to fully draw in the audience and get them involved in the story. That certainly happens in The Convict, but I wasn’t convinced that the same couldn’t have happened in two acts. There are some slow patches in Act One, whereas acts Two and Three are full of action and emotion and consequence.

The Convert is a powerful drama, and as much as I love “The Walking Dead” (and especially as much as I love Michonne), it probably wouldn’t be such a bad thing for Gurira to give up her day job and focus on being the kick-ass playwright she so clearly is.