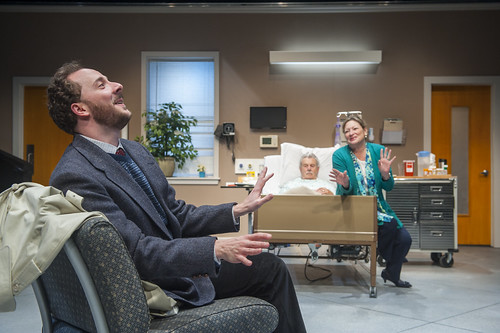 
There are breathtaking moments – literally, your capacity to process oxygen is shut down – in Nicky Silver’s script of The Lyons now at the Aurora Theatre. Silver takes an average situation – a patriarch in the final days of an illness is tended to by his wife and two adult children – and makes it painfully funny by exposing every sharp edge he can find and slicing through anything in his way. Those breathtaking moments usually involve some sort of truth telling at the expense of someone else’s fragile or carefully crafted sense of self, but the inability to breathe is often followed by a huge laugh.

Or at least it feels like there should be a big laugh. Director Barbara Damashek’s production is dialed to 6 while Silver’s script seems to call for at least double that. What should be ferocious and funny comes across as rather pallid and only slightly amusing. Perhaps there was a fear that playing it too big and mean in Aurora’s intimate space would alienate rather than amuse the audience, and maybe it would, but there seems to be a whole lot of pent-up energy in this script that never gets released.

The Lyons family is perfectly recognizable and relatable as stage families go, but they’re also nightmarish, annoying and incredibly incisive when it comes to shredding one another (and therein lies the entertainment value). Matriarch Rita (Ellen Ratner) is the primary architect of the horror. She seems so sensible and lovely, but then the things that come out of her mouth are just astonishing 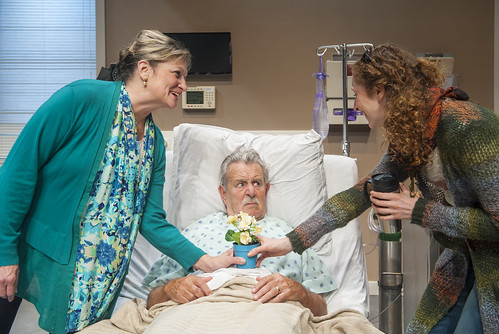 Flipping through a home decorating magazine at the hospital bedside of her dying husband, she muses on changes she’d like to make to their living room and casually (and caustically) notes that he won’t be around to enjoy the new decor. But it’s not like her husband, Ben (Will Marchetti) gives a damn. When the children arrive, daughter Lisa (Jessica Bates) and son Curtis (Nicholas Pelczar), the family portrait comes into full focus: this group has no kindness, compassion or concern for anyone. The dominant theme among these Lyons is self-involvement to a pathological degree. A grandmother thinks nothing of dismissing her young grandchild as “retarded” and a husband has no problem sharing the fact that he can’t stand his gay son. The daughter is in and out of recovery and the son, a writer, can’t seem to relate to actual human beings. In short, they all deserve each other.

The only voice of sanity is a stern nurse (Edris Cooper-Anifowoshe) who ends up caring for multiple members of this tribe. There’s also an appearance by an actor (Joe Estlack) who has a bad reaction to the Lyons brand of interaction. But mostly we have here an insular group fighting through and interlocking their psychoses.

The performances feel restrained and fall too often into sitcom rhythms without breaking into the ferocity needed to make this play feel less like a retread of dysfunctional family tropes and more of a manic comedy about the extreme narcissism of the complacent upper middle class. Seems like an outrageous comedy has been de-clawed, or, in other words, this Lyons has been tamed.