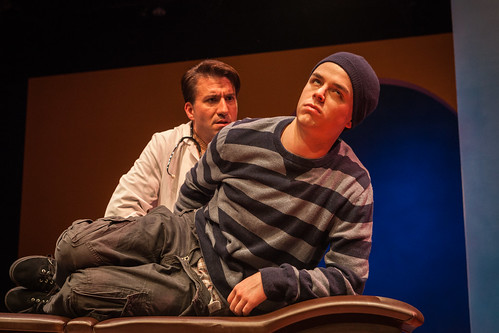 Liam Vincent (left) is Jeffrey, a Nebraska doctor, and Andrew Humann is Benn, is his revolutionary young patient in Peter Sinn Nachtrieb’s The Totalitarians at Z Below. Below: Vincent’s Jeffrey gets cozy with his wife, Francine (Alexis Lezin), a political consultant. Photos by Mark Leialoha


Our sorry political state may be sending the country down the toilet, but it sure is inspiring some grand entertainment. Veep and House of Cards offer two distinct points of view on the absurdity of Beltway power mongering. Lauren Gunderson’s The Taming was a comic highlight of last year’s local theater scene (review here) in its exploration of political game playing.

Now we have Peter Sinn Nachtrieb’s The Totalitarians, a Z Space production in association with Encore Theatre Company and the National New Play Network. Set in the fine state of Nebraska, Nachtrieb’s biting comedy watches seemingly ordinary people mix with politics, all to disastrous results. Not that the play is anything resembling a disaster. On the contrary. It’s hilarious and painful and horrifying in the way it so effortlessly conjures a sham democracy populated by tricksters and schemers, murderers and mental incompetents.

What could be simpler than a race for Nebraska’s lieutenant governor? Those easygoing Midwesterners don’t get caught up in all that political nonsense do they? Oh, but they do, and there’s no such thing as simplicity in politics, not with every race leading back to some power broker in D.C. 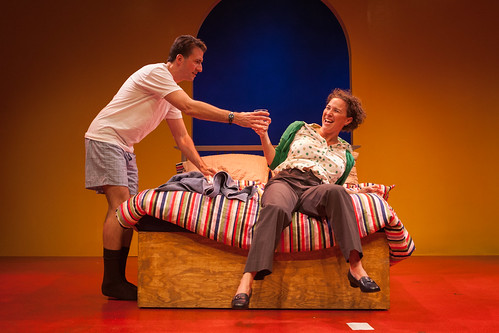 In this particular race, the underdog candidate is Penelope Easter (Jamie Jones in a performance so ferocious you have to wonder if she might actually be part politician), a foot-in-mouth candidate not unlike the former governor of Alaska. Except Penny is not dumb. She may not be a whiz with words (“Things come in my mouth wrong?), but she’s got passion and lots of it. And ambition. As long as she has someone to put words in her mouth (and maybe a few thoughts in her head), she’s OK.

Her underdog status shifts thanks to a career-defining speech by consultant Francine (Alexis Lezin), who is aching to break out of her Nebraskan confines. She may think Penny is stupid, but she’s also a powerful orator who makes Francine’s prose sing. Every writer responds to that.

Francine’s husband, Jeffrey (Liam Vincent), a generic general practitioner, is alarmed that his wife’s ethics seem to bend so easily to accommodate Penny’s grab for power. Perhaps that’s why he’s so easily swayed by a charismatic (and terminally ill) young patient, Ben (Andrew Humann), who believes that Penny is part of a covert scheme to turn Nebraska into a totalitarian regime.

The first act of this 2 hour, 20-minute comedy ends on such a comic high that is seems nearly impossible that Act 2 will be anything but a letdown. And it is, but only to a certain degree. There’s a lull in the first half of the second act that director Ken Prestininzi has some trouble carbonating. But then Nachtrieb gets his comic groove back, and the darker elements of the satire come bursting out in a bloody climax that essentially turns a Nebraska stadium into a Greek amphitheater.

If Jones is the holy roller (derby) motor of the play, then Lezin is its fuel. She straddles the worlds of realistic working woman and ruthless politician in a play (who is probably more realistically ruthless than we might like to believe). Her frustrations with her talent, her marriage and her career are as rich as her speech-writing, candidate-defining triumphs, and Lezin is such a marvelous actor we feel every bit of everything.

Vincent and Humann make an appealing duo, sort of a would-be terrorist Bert and Ernie, but they’re never quite as interesting as Jones and Lezin, nor are they given as much scenery to chew.

The enjoyment level of The Totalitarians (the title reminds me of a politically themed soap opera I wish I could DVR daily) is high. This new play, part of a rolling world premiere (we’re the second stop after New Orleans), isn’t perfect, but The Totalitarians is, like, totally the subversive laugh fest you need as we head into the brainwash known as the holidays.