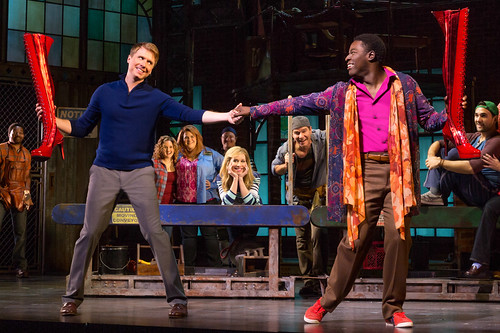 Steven Booth (left) and Kyle Taylor Parker are Charlie and Lola in the Broadway national tour of Kinky Boots with a Tony Award-winning score by Cyndi Lauper. The show, based on the 2005 movie of the same name, is part of the SHN season at the Orpheum Theatre through Dec. 28. Below: Booth’s Charlie takes a fancy to Lindsay Nicole Chambers’ Lauren. Photos by Matthew Murphy


Kinky Boots is the kind of musical comedy that leaves no unpleasant aftertaste. There’s no guilt in enjoying its pleasures, and though it’s not exactly an emotional feast, neither is it empty calories. This is a well-crafted, tuneful show whose only aim is to entertain and uplift. It succeeds on both counts.

A huge hit on Broadway, where it racked up six Tony Awards and is well into its second year, Kinky Boots is based on the 2005 film of the same name, one of those distinctly British underdog feel-good movies they do so well over there. Harvey Fierstein, adapted the movie, Cyndi Lauper made her Broadway composing debut with the score, and Jerry Mitchell (last seen in these parts with the Broadway-bound Legally Blonde – review here) directs and choreographs in his typically efficient, ebullient manner.

The national touring production of Kinky Boots now at the Orpheum Theatre as part of the SHN season is, in short, a blast. It’s tender hearted, energetic and filled with good will toward men, women and those who have yet to make up their mind.

What’s intriguing about the structure of the show is that there’s no great villain other than hard times and closed minds. Set in a Northampton, England shoe factor on the skids, the story is about a son reluctantly taking over the family business, finding a way to save it from extinction and challenging his community’s (and, it turns out, his own) basic attitudes of acceptance. Compared to Legally Blonde, a less successful screen-to-stage adaptation, this is Shakespeare or Greek tragedy.

Several elements contribute to the high level of Kinky enjoyment. The first is Fierstein’s book. This is a man who knows his way around drag queens (Torch Song Trilogy, La Cage aux Folles, Hairspray), so when it comes to dealing with his leading lady here – a fierce drag queen named Lola – he knows how not to write in stereotypes. He knows how to depict a fully rounded person who is confident in some parts of her life and not in others (daddy issues anyone?). He gives us two protagonists: Lola, whose flair for fabulous footwear is the key to survival for the shoe factory, and Charlie, a shoemaker by birth who doesn’t quite know what he wants in life or who he is. There’s also a third main character in the form of the entire shoe factory community, which grows to include Lola’s entourage of drag queen friends. By the end, that community turns out to be the most rewarding character of all. 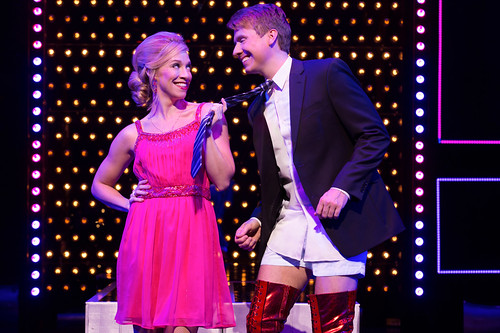 If you want to know how to move a show like a sexy, well-oiled machine, Mitchell is your man. The trick is not letting the machine overwhelm the production, lending a cold, mechanical feeling take over the stage. Mitchell is a master at this, slowing the gears for moments of warmth, charm, humor and sex appeal.

And finally there’s Lauper’s score. If you only know her mega-hits from the ’80s, you’ll recognize some of that sound in the songs. She can do club and disco with real flair and not make it seem out of place on the musical stage. But there’s a lot more here to her musical palette. She can do character songs (“The History of Wrong Guys” sung by Lauren, the delightful woman Charlie should be in love with), heart-wrenching ballads (Lola’s “Not My Father’s Son”), great pop tunes (“What a Woman Wants”) and driving, stirring anthems (“Raise You Up/Just Be”). This is not some pop pretender cashing in on Broadway. Lauper is a real tunesmith who cares about character and narrative. It will be exciting to see what project she takes on next.

This zippy package is driven by an amiable cast headed by Steven Booth as likable everyman Charlie and the powerhouse Kyle Taylor Parker as Lola. Booth is intriguing because he might be dismissed as a nice nebbish (think Dave Foley from Kids in the Hall), but he’s got a little edge to him, and when he sings (as in his big solo, “Soul of a Man”) he commands attention and defies expectations (a theme of the show). Parker starts fabulous and stays that way. In full drag, he looks like an ultra-glam Dionne Warwick, and he wears the costumes (by Gregg Barnes) with real panache. He delivers on every level and even gets his Act 2 Shirley Bassey moment with the power ballad “Hold Me in Your Heart.”

The emotional stakes in Act 2 get a little overwhelmed by the slick staging (a boxing match between Lola and a factory thug packs a punch), and the actors could dial it up a notch, but Kinky Boots remains a well-heeled musical that’s good for the sole, er, soul.

[bonus interview]
I talked to Kinky Boots co-creators Cyndi Lauper and Harvey Fierstein for a feature in the San Francisco Chronicle. Read the story here.