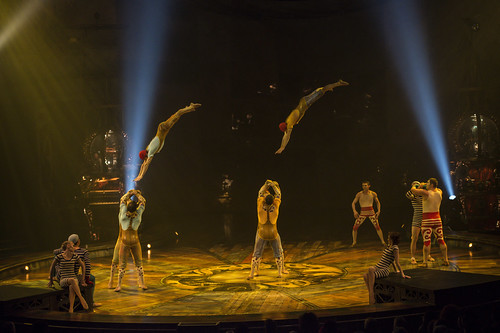 An acrobatic act called “Banquine” is part of the latest Cirque du Soleil touring show, Kurios – Cabinet of Curiosities, written and directed by Michel Laprise and running through Jan. 18 under the blue-and-yellow-striped tent in the parking lot at AT&T Park. Below: A prelude to the act “Rola Bola.” Photos by Martin Girard shootstudio.ca


In the realm of Cirque du Soleil, the first time is the best. My first Cirque show, Quidam was at Oakland’s Jack London Square in 1997. I thought I’d never see anything as good, and in a way, I was right. My first exposure to the particular world of Cirque – spectacle under a blue-and-yellow-striped tent filled with costumes, lights, music and acrobats designed to dazzle, distract and delight – was among my most powerful theatrical experiences (yes, circus is a very specific kind of theater) ever, and I immediately fell in love with Cirque.

Thirty years after it was formed, the Montréal-based Cirque is still going strong. They preside over a worldwide empire and have long set the standard for “new circus” (circus mercifully free of animals). Every year or two, a new touring Cirque production rolls into the Bay Area, and there was a period there (Kooza, Ovo, Dralion, Varekai) when the shows were interchangeable: fun (to a degree), filled with obtuse, artsy worlds, vague storytelling, bouncy music and a reliably thrilling act or two. The clowns could pretty much be counted on to be awful, but there was usually enough there to compensate.

Beginning with Totem (themed as vaguely indigenous peoples) in 2011 and with last year’s Amaluna, the Cirque brain trust seemed to be making an effort to stretch the bounds of their product and refresh it. In this anniversary year, that effort fully pays off in Kurios – Cabinet of Curiosities now in the parking lot behind AT&T Park into the new year.

Written and directed by newbie Michel Laprise, a longtime Cirque newbie enjoying his first run under the big top, Kurios is simply delightful, with the key word being “simply.” In many ways, this is a low-tech circus with much more emphasis on personality and charm than on artsy spectacle and cold thrills. 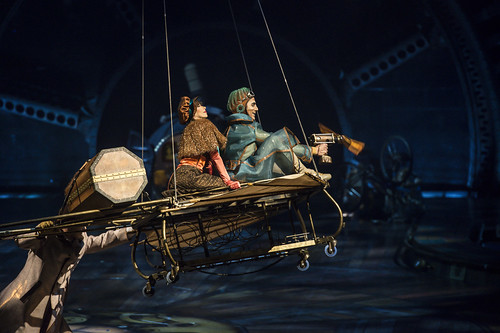 The opening number is the perfect example of what Kurios gets right. On a set that marries a steam-punk vibe with the inside of a giant clock (design by Stéphane Roy), a jumble of performers spill out. There’s a juggler juggling hands. There’s a llama head on a stick. There’s an airplane. There’s a guy who looks like he’s wearing a diving bell (we find out what’s inside later on, and it’s fantastic) and there’s general merriment and mayhem. Surely it’s all carefully choreographed, but it has a spontaneous, genuinely fun feel to it, and it sets the tone for an irresistibly playful 2 1/2 hours.

Kurios may be the least pretentious Cirque show of all time, which is quite an accomplishment, unless that is, you read the press notes, which attempt to explain this merry universe. For instance, the guy in the diving bell is Mr. Microcosmos, and then there’s Mini Lili, who “represents Mr. Microcosmos’ unconscious mind, his intuitive self, his fragile and poetic side.” You get none of that from the show, but both characters are wonderful anyway.

Among the stand-out acts are “Rola Bola” in which James Eulises Gonzalez Correa balances on precarious stacks of things like balls and boxes and is raised higher and higher into the air with no safety net below him. Act 1 includes a truly surprising act: a funny clown! David-Alexandre Despres presents the “Invisible Circus,” which is exactly what it sounds like. There’s a high-wire act, a high diving act and even a lion (Felipe) who escapes, and it’s all charming. Despres returns in Act 2 with an audience member whom he takes on a date and introduces to a dinosaur and a cat with hilarious results. All praise funny clowns.

Things really take off in Act 2 with the bouncing men of the “Acro Net,” a sort of giant, stage-wide trampoline that inspires airborne wonder and high-energy clowning. I wasn’t thrilled with the yo-yo act, but I did enjoy the “Theater of the Hands,” which involves some very clever hand puppetry caught close up on video and projected onto a screen above the stage.

The finale, “Banquine,” involves 13 acrobats throwing each other around, stacking each other up and generally torturing gravity, and it’s a fittingly thrilling way to close this “cabinet of curiosities.”

It’s so nice to see Cirque taking itself less seriously and letting its audience have fun without that feeling that you’re just missing what it’s all really about. Cirque du Soleil learned how to put the “irk” in new circus, but with Kurios it seems they’re just as happy to bring back the light of the sun.

[bonus interview]
I talked to Kurios writer/director Michel Laprise for a feature in the San Francisco Chronicle. Read the story here.