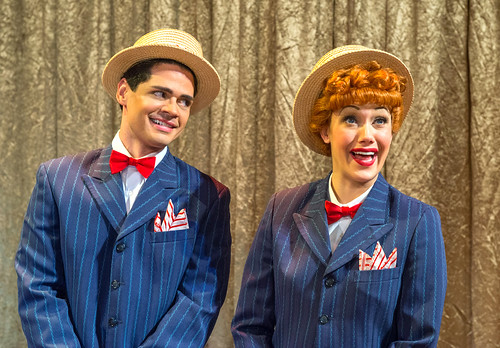 Euriamis Losada is Ricky Ricardo and Thea Brooks is Lucy Ricardo in the national tour of I Love Lucy Live on Stage at the Curran Theatre. Photo by Justin Namon. Below: The original Fab Four – Brooks and Losada as Lucy and Ricky and Kevin Remington and Lori Hammel as Fred and Ethel. Photo by Ed Krieger


Honey, in this town, we’re used to our re-runs recreated with drag queens.

After seeing the likes of Sex and the City and The Golden Girls performed by the best drag queens San Francisco has to offer, I Love Lucy Live on Stage comes across as quaint and tame at best and a waste of time at worst.

An expensive exercise in nostalgia, this TV-to-stage project feels like a bloated amusement park show designed for sun-addled tourists who need to rest their feet. At 100 minutes, director Rick Sparks manages to squeeze in two episodes of the classic sitcom (“The Benefit” and “Lucy Has Her Eyes Examined,” written by Jess Oppenheimer, Madelyn Pugh and Bob Carroll Jr.) and a whole lot of filler in the form of garrulous emcee, singing-and-dancing commercials, full-on musical numbers and a trivia contest featuring a member of the audience.

A whole lot of effort has gone into re-creating the fabulous ’50s costumes and the Ricardos’ apartment set, but honestly: why wouldn’t you just stream the original series if you were pining for a Lucy fix? (You can stream the first six seasons on Hulu Plus and select episodes on Amazon Prime). 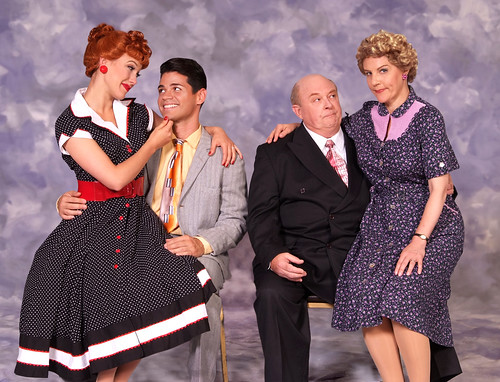 It’s all so innocuous as to be unnecessary.

That said, props to the cast for giving it their best. Euriamis Losada is adorable as Ricky, and yes, he does get to sing “Babalu” with the band. He also gets to say, “Honey, I’m home” and “Lucy! You’ve got some ‘splainin’ to do!” Thea Brooks has the impossible task of conjuring Lucille Ball, and she definitely has her moments. Vocally, she has some great moments, and her “Lucy fake cry” is spot on, as is her “eeeeee” face when Lucy realizes she’s been caught in one of her schemes.

Kevin Remington brings the girth as Fred Mertz, and Lori Hammel as Ethel Mertz has her best moments when Lucy is trying to convince her to fill the back end of a horse costume. Poor ol’ dumpy Ethel.

There are also supporting characters (Carlos Martin as the eye doctor wrings a few good laughs and Richard Strimer brings some needed zest as Lucy’s jitterbug partner) who sing, dance and try to pad the show.

It’s just so many empty calories – TV dressed up as theater. I’m looking forward to future productions of The Sopranos and Breaking Bad, with or without drag queens. And please be sure to call me when it’s time for Laverne and Shirley in Death of a Salesman.