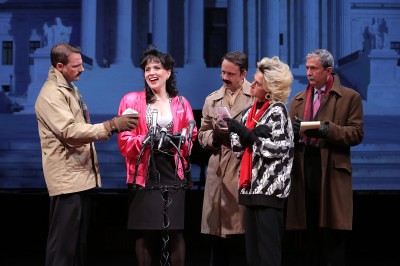 
For those of us with no ear for legalese, for whom courtroom scenes in TV shows and movies induce narcolepsy, the premise of Elevator Repair Service’s Arguendo does not sound promising. This celebrated and intrepid New York company, most famous for its word-for-word production of The Great Gatsby (the eight-hour Gatz), turns its attention to our highest court for a verbatim account of a 1991 case, Barnes v. Glen Theatre Inc., that dealt with issues of public nudity, more specifically the nude dancers at the South Bend, Ind., Kitty Kat Lounge and Glen Theatre. If you haven’t heard of this case, not to worry. It wasn’t exactly Brown v. The Board of Education, but it did delve into what is and isn’t considered freedom of expression and whether or not it’s OK for people to dance naked in public.

As might be expected, this is not your run-of-the-mill verbatim courtroom drama. If it were, the audience, even the lawyers, would be asleep. Instead, director John Collins and his fantastic troupe of five energetic actors pull out all the stops to create the liveliest, most irreverent courtroom imaginable.While the lawyers make their cases – Ben Williams as the Petitioner and Mike Iveson as the Respondent – the justices of the Rhenquist court (White, Marshall, Blackmun, Stevens, O’Connor, Scalia, Kennedy and Souter) interrupt with intermittent intelligence, but mostly they’re depicted here as black-robed children – bored, distracted, annoyed and playful. They do not seem to be the country’s font of judicial wisdom but rather petty, quirky goofballs who seem drunk on their power. That’s pretty entertaining to watch. 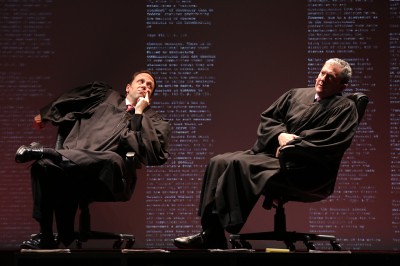 Adding to the dynamism of the piece is a rear projection wall that zips through legal texts and references like an old-fashioned microfiche machine on 21st-century steroids (the media software is by The Office for Creative Research and the vide designer is Ben Rubin). The projections are such a strong presence in the piece that they even take a bow along with actors at show’s end.

As the show progresses, it gets more manic, the theatrical gestures growing bolder and bolder, and when the full-frontal nudity happens, it’s not even that surprising (but it’s still pretty funny and couldn’t be more integral to the proceedings). Apparently it’s not all that difficult to make the Supreme Court and its machinations look ridiculous.

Under it all, of course, is a serious tussle with the First Amendment, and the issues raised on both sides offer some food for thought in between the delicious morsels of zany theatricality.

Arguendo (the title is apparently a bit of legalese meaning “for the sake of argument”) is fresh and sharp and bursting with intelligent satire. It’s a great introduction to Elevator Repair Service and, with any luck, it will pave the way for a Bay Area presentation of (a fully clothed) Gatz.