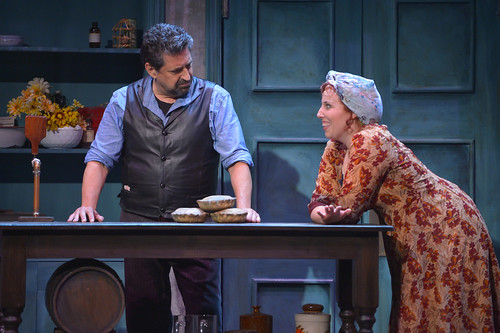 
Tory Ross’ sublime performance as Mrs. Lovett, maker of the “worst pies in London,” threatens to hijack the TheatreWorks production of Sweeney Todd: The Demon Barber of Fleet Street and turn it into Nellie Lovett: People Who Eat People Are the Luckiest People.

There’s no escaping the genius of Angela Lansbury’s indelible performance (captured on video) in the original production of what composer Stephen Sondheim describes as a “dark operetta,” but that star turn was a Victorian cartoon, a manically genial grotesque with shadings of a real flesh-and-bone woman under all the goofiness.

But Ross is a whole lot less cartoon and a whole lot more human being. She’s still funny and sharp and kind of crazy, but she’s also a little sexy, a lot smart and quite adorable. She’s not some zany old broad but a vibrant woman who looks to be around Sweeney’s age (if a little younger). She’s a bright spot in a dark show and she makes more of an impression than David Studwell in the title role or director Robert Kelley’s strained updating of the show to World War II London.

This updating is vague at best. Set designer Andrea Bechert has built what looks like an underground factory that turns into a Tube station, which doesn’t entirely make sense, and the beginning of the show sees officials running around with air raid sirens wailing and people decamping to the safety of the subterranean setting. But then it gets fuzzy. Are we to believe that the evacuees are performing Sweeney Todd in its entirety complete with sets, orchestra, swirling stage smoke and lots of lighting cues? Or perhaps that’s too literal. But otherwise why is a Victorian tale of murder being performed during a potentially deadly bombing raid? 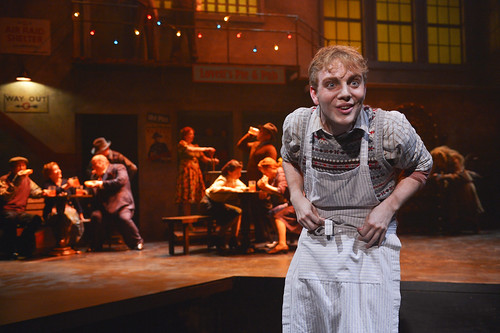 There’s a song later in the show called “City on Fire,” which takes Sondheim’s metaphorical firestorm (“City on fire! Rats in the grass/And the lunatics yelling in the streets!/ It’s the end of the word! Yes! City on fire!”) and makes it a literal bomb fest. That’s the only time the setting makes actual sense, but it doesn’t really add much to what Sondheim and book writer Hugh Wheeler (working from Christopher Bond’s play) have already so masterfully created.

The best news about the “Keep Calm and Carry On”-ization of Sweeney is that it doesn’t really matter. Kelley’s production is otherwise tip-top. The voices are gorgeous and William Liberatore’s nine-piece orchestra sounds lush and full and heavy and bloody in all the right places, especially in the show’s cinematic underscore.

Sweeney Toddd is an extraordinary musical – incredibly efficient in its storytelling and full of comical and emotional surprises. It purports to be a horror show, but Sondheim’s score is constantly igniting laughs and sparking human connections. I’m not a fan of the Tim Burton movie except for the 64-piece orchestra and glorious orchestrations because the performances, for the most part, are cold and empty, as is the arm’s-length filmmaking.

But on stage, Sweeney pulses with life in all its operatic, chaotic craziness, and Kelley’s cast handles it all with tremendous gusto. Studwell’s Sweeney may not be as deeply felt or as vocally powerful as he might be, but he’s a strong, menacing presence who knows his way around a a dark ballad (“Epiphany”) and a straight razor. Jack Mosbacher as Anthony Hope makes a fine impression with his lustrous “Johanna,” one of Sondheim’s most achingly beautiful melodies, and Spencer Kiely couldn’t be any sweeter as Tobias Ragg on “Not While I’m Around.”

The entire ensemble sounds fantastic, but the musical highlights belong to Ross’ Mrs. Lovett. Her duet with Sweeney, “A Little Priest,” ends Act 1 on the highest of notes, and her “By the Sea” is at once delightful and sad (because it’s a fantasy that can never be).

There’s no blood in this production (just splashes of red light from designer Steven B. Mannshardt), but there’s plenty of melodrama, high and low, which is as it should be in a tale of revenge, murder and love, sweet love. Once this story gets going, it’s an efficient machine, not unlike Sweeney’s slick barber chair, which, with the pull of a lever, dumps bodies down a chute and into the butcher shop/cellar. As long as that machine is in motion, not even a cosmetic overlay like the Blitz setting, can keep it from accomplishing its wicked yet somehow wonderful musical magic.