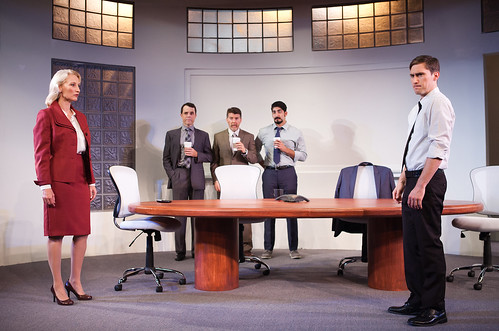 
In November of last year I reviewed a play by Bay Area playwright Aaron Loeb, and I loved it. That play, Ideation, was part of San Francisco Playhouse’s Sand Box Series, an incubator for new works. For a new play, Ideation was in remarkably good shape and went on to win the Glickman Award, which is given to the best play to have its world premiere in the Bay Area.

The results are just as they should be. Loeb has tweaked the play a bit. The ending has more punch, and both the thrills and the laughs have been punched up a few notches. It’s one of the best plays you’ll see about paranoia and how quickly the seemingly “normal” can become abnormally scary.

I stand by my original review (read it here) and feel like improvements have been made (including a slick set by English) that make Ideation the must-see play of the fall. 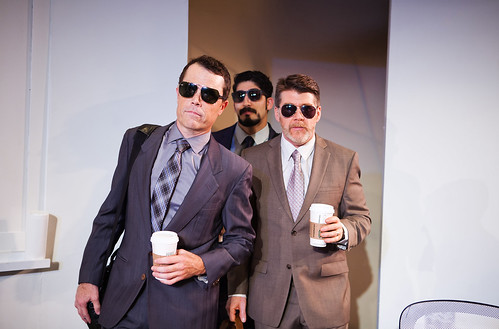 I wrote a tiny feature on Ideation for the San Francisco Chronicle (read it here), but Loeb submitted himself to an email interview what was too good not to share. So here is the interview in its entirety.

Q: What inspired you to write Ideation?
A: I was inspired by my work in tech (video games, specifically) and also my wife’s work as an international human rights lawyer at the Center for Justice and Accountability in San Francisco. I had just started working with former management consultants for the first time in my life and I was entranced by their language and their thinking process. I was amazed by the way they could take any problem and break it down into its component parts, then relentlessly problem solve until they made progress.

At the same time, my wife was in the midst of leading a civil suit against the former defense minister of Somalia, filed by victims of the genocide and crimes against humanity in Somalia and Somaliland in the 80s. I learned in her preparation and work on the case about the systematic and methodical ways in which the crimes were planned. 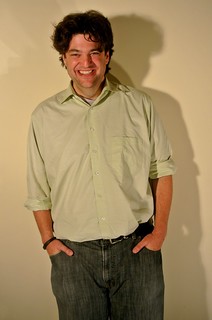 Somehow, the two things became connected and I was writing a play about management consultants working on something possibly terrible.

Q: How (if at all) has Ideation changed since its Sandbox premiere last year and how have you approached this second production?
A: I’ve done some significant rewrites to Ideation – though they might not be noticeable to everyone. I’ve strengthened the relationships of the characters and clarified the build-up to the ending of the play. Some of the changes are based on feedback I received from the first run. Some of it is to resolve issues I was never completely happy with.

There was a section in the middle of the play that I always felt was a bit too circular (as in, the characters discuss a problem once, then they discuss it again, just 10 percent more intensely). I’ve flattened out that circle now so that it’s a steady progression.

A lot of the changes are in the construction of the play, not in any of the story elements. The biggest changes are in Hannah’s character to make it clearer who she is and to strengthen the fact that this is her story.

One of the things I’m so happy about in this next production is that the artistic team has remained intact. Carrie Paff, Mark Anderson Phillips, Michael Ray Wisely, Jason Kapoor and Ben Euphrat are all recreating their roles from the first run and Josh Costello is directing once again. Bill English is designing the set this time, but also serves in his ongoing capacity as my unerringly honest reader; we’ve done three world premieres together and now have a shorthand that is pretty irreplaceable.

Because it’s the same team together again, we have the chance to go deeper than we did last time. It’s a rare, rare opportunity.

Q: What did winning the Glickman Award for Ideation mean to you?
A: Any time you win an award with the pedigree of the Glickman, it means a lot. Angels in America won the Glickman with its world premiere. It’s an award with an incredible history, and it means the world to me to have been honored in such a way.

That said, the part of winning the Glickman I will always remember is the award ceremony at the annual Theatre Bay Area conference. Because this is an award bestowed by local theater critics, at the ceremony three of the judges of the award – Robert Hurwitt, Sam Hurwitt and someone calling himself “Chad Jones” (if that is his real name) – presented the award and each spoke about my writing. They didn’t talk about Ideation only, but about all of my plays.

I don’t know any of the three men very well personally (I’m Facebook friends with two of them, but you could count the hours I’ve spent with the three on one hand), but each of them spoke about my work with such clarity, it was as though we were old friends.

What a remarkable thing, I thought. I’ve had a years-long conversation with each of them through the theater.

This is only possible in a community. The play was born here in the Bay Area (as part of Just Theater‘s Play Lab), then developed at the Bay Area Playwrights Festival, then premiered at SF Playhouse, then embraced by the Bay Area’s top critics.

As a writer, it is possible to feel terribly alone most of the time. You wonder if anyone will ever hear you. Winning the Glickman, I felt the embrace of my entire community, which was particularly gratifying because it gave me an opportunity to publicly thank everyone who helped me bring the play to life.