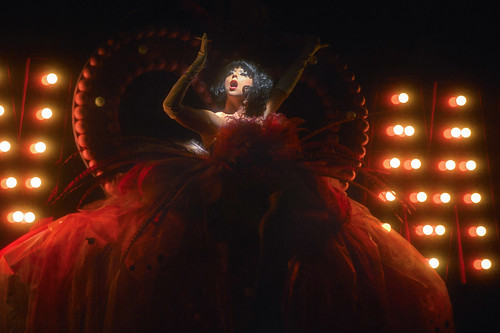 Meow Meow, sort of a Lady Gaga-meets-Lotte Lenya kind of performer, stars in the world premiere of An Audience with Meow Meow, a blend of play and nightclub act directed by Emma Rice of Kneehigh Theatre fame. Below: Meow Meow gets support (literally) from Michael Balderrama (left) and Bob Gaynor. Photos courtesy of kevinberne.com


You get the impression, watching An Audience with Meow Meow that the star, a self-styled international singing sensation, and director Emma Rice would like nothing better than to destroy the theater and finish the show from the rubble. While audience members wipe blood from their faces and grapple with their broken bones, Meow Meow will persist in singing, making jokes and lamenting the state of the world. Stripped of all theatrical artifice, artist and audience will become one, and art will have saved the world.

That doesn’t happen – well, not exactly. But Meow Meow and Rice (on loan from Kneehigh Theatre, the company behind Berkeley Rep hits The Wild Bride and Tristan & Yseult) do what they can to deconstruct a nightclub act and turn it into a substantial piece of theater.

Meow Meow, in case you don’t know, is the creation of Melissa Madden Gray, a wildly talented singer, actor, comedian. Think about how Stefani Germanotta created Lady Gaga or even Bette Midler created The Divine Miss M – both alter-egos that fully display the performer’s talents but give license to be larger, bolder and braver than life. Meow Meow says repeatedly that her mother was a bottle of Absinthe, and the impression she gives is one of world-weary glamour and sophistication tinged with hardship and a hint of the gutter. She’s a chanteuse you might find in Weimar-era Germany or a clown in a vaudeville act or a jaded broad in the lounge of a skeevy Vegas casino. 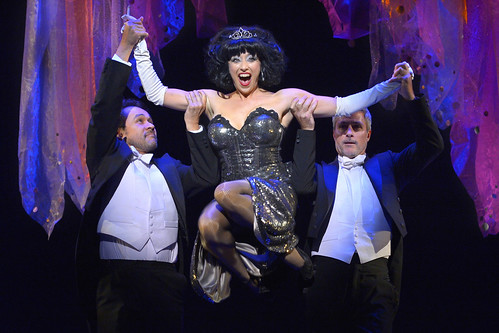 In fact, when Audience begins, it feels very much like a Vegas flashback. Meow Meow sits perched above the stage, her name in lights, giant gown flowing beneath her (the glitzy sets and costumes by Neil Murray look like a million bucks – literally). She’s joined by two dancing boys (Michael Balderrama and Bob Gaynor), and they do some perky dancing (choreography by Tiger Martina) suitable for the Vegas stage or a ’70s variety show. Musical director Lance Horne leads his agile quartet from the piano, and they make the shifts from the glossy to the gritty without missing a beat.

Things quickly begin to go wrong. Meow Meow injures her dancers but pushes on. The dancers quit, but she pushes on. The stage crew (also played by Balderrama and Gaynor) try to keep up but eventually revolt and attempt to shut down the show. Still, Meow Meow goes on. To sing “Ne Me Quitte Pas” she gets to men from the audience to perform with her (they serve as mic stand and chair). It’s a hilarious bit, but the other audience participation routine with five volunteers is even better (and funnier) and ends with Meow Meow crowd surfing through the Roda Theatre.

It seems that Rice and Meow Meow have taken some of the best bits from previous Meow Meow shows – a multilingual version of “Itsy Bitsy Teeny Weeny Yellow Polka Dot Binkini,” Radiohead’s “Fake Plastic Trees,” the crowd surfing, the line “I am real. I’m not a TV.” – and fashioned them into a 90-minute excursion into the frayed and the fabulous. By the time the stage is stripped bare and Meow Meow is stripped to her slip (another very funny bit), it comes down to the music, and that’s a good thing (and something I could have more of). The show feels a little like Hedwig and the Angry Inch as it wraps up, with the music amping up in emotion and power. Megan Washington’s “Skeleton Key” and Patty Griffin’s “Be Careful (All the Girls)” benefit from Meow Meow’s gimmick-free, full throated and affecting performance.

Meow Meow is really something, whether she’s being an adept physical comedian, a post-apocalyptic cabaret star or just an emotionally astute singer standing before a crowd. To be in her audience is to be in for a rich, rambunctious experience.

[bonus interview]
I interviewed Meow Meow for a story in the San Francisco Chronicle. Read the feature here.