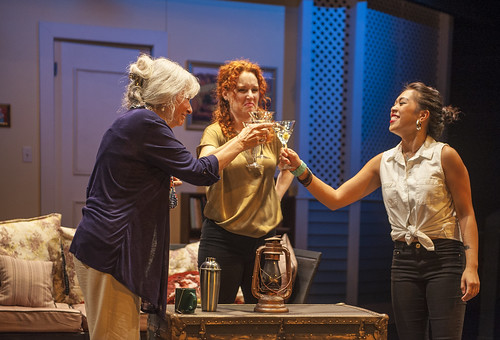 Generational differences and technology come into play a lot in Rapture, a crackling season opener for the Aurora. Gionfriddo is a smart, feisty writer who knows her way around a joke that always contains more than a laugh. She tackles the gargantuan issue of feminism and its evolution into the 21st century and comes through with a stage full of surprising, complicated characters having passionate, always intriguing discussions.

She’s such a sharp writer, in fact, that she’s able to make a case for Betty Friedan on one end of the feminist spectrum and Phyllis Schlafly way on the other side, all the while generating laughs and bothering to imbue her characters depth and heart.

Rapture, Blister, Burn (the title comes from a lyric by Courtney Love) is essentially a two-part invention: one part involves a summer seminar in feminism called “The Fall of American Civilization” taught by a writer described by Bill Maher as the “hot doomsday chick” and attended by a housewife and a college student making a provocative reality show with her boyfriend. The other part is a mid-life crisis triangle in which former grad school friends attempt to correct the mistakes of their past and attempt to travel the roads they didn’t take. The housewife wants to trade in her porn-loving pot-head husband and kids so she can finish the degree she abandoned. And the rock star writer wants to forgo her success for the family she didn’t have. 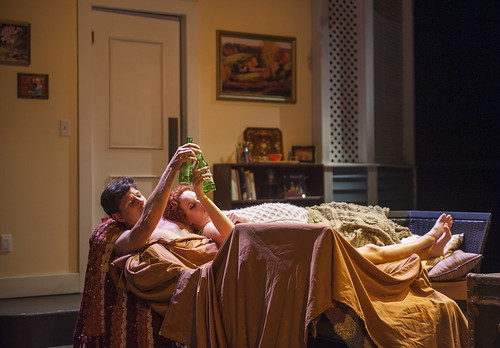 Director Desdemona Chiang creates a natural but propulsive rhythm to the nearly 2 1/2-hour play, and her appealing cast makes of the most of playing smart, funny people while managing to convey real emotional weight. Marilee Talkington is Catherine, the famous writer who has returned home to care for her supposedly ailing mother (Lillian Bogovich as Alice doesn’t seem nearly as infirm as the daughter makes her out to be). Talkington expertly shifts between Catherine’s intellectual prowess and her emotional confusion as she reopens an old wound.

Catherine’s mother just happens to live in the same town as two significant people from the past: her grad school roommate, Gwen (Rebecca Schweitzer), and her former boyfriend, Don (Gabriel Marin). Gwen and Don are now married with two sons. Gwen works in the home and Don is a dean at the local college. Their marriage is not what you’d call a strong one – she’s a nag, he’s a porn-addled layabout and they have financial problems – so Catherine’s arrival finds them at a particularly vulnerable moment.

To make some extra cash while taking care of her mother, Catherine offers a summer seminar. Gwen signs up and so does Avery (Nicole Javier), a bright college student with distinct views on feminism.

The play takes some surprising turns, and if it comes close to feeling like a sitcom, Gionfriddo’s insightful writing manages to subvert those comfy-cozy expectations. Even Don, the odd man out here, is sympathetic, and through his stoner fog, he displays the smarts that have been dulled by the lack of real challenges in his life. He finds moments of truth (as they all do) when he says with tenderness: “Is that just a monologue you need to say so this isn’t your fault?” It’s a great line at a great moment, but you need to see it.

There are serious issues being bandied about here – the rise of degradation as entertainment, the notion of two empowered people navigating equality, breaking through our own personal mythologies – and no easy conclusions. Rapture, Blister, Burn entertains as much as it provokes, and while it doesn’t exactly blister or burn, it comes pretty close to achieving some theatrical rapture.