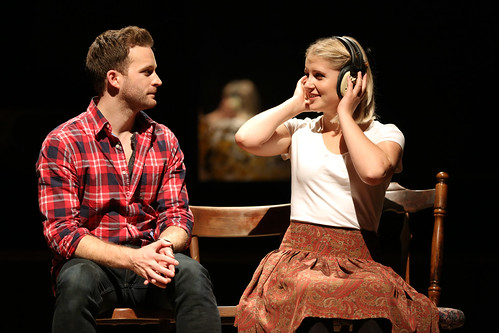 Stuart Ward is the guy and Dani de Waal is the girl in the national tour of the Tony Award-winning musical Once based on the movie of the same name. Below: The company of Once performs the transcendent number “Gold” at the end of Act 1. Photos by Joan Marcus


If every movie-to-musical transformation were as soulful and creative as Once the state of the Broadway musical would be in a much better place.

There would seem to be no less likely candidate for the Broadway treatment than the sweet and modest 2007 Irish indie film Once about a frustrated singer/songwriter in Dublin and the Czech immigrant who changes his life. It’s a love story and not a love story, a musical and not a musical. Above all else, it’s intimate and delicate, like a slice of life infused with passionate music transferred with great love to the big screen.

Fans of the movie (which nabbed a best song Oscar for songwriters/stars Glen Hansard and Markéta Irglová’s “Falling Slowly”) let out a collective groan when it was announced that Once would be turned into a Broadway musical. Kicklines across the River Liffey? Or worse, riverdancing through the countryside?

One of the great joys of Once, the musical, is that there’s nary a trace of crass Broadway commercialism in the telling of this still-intimate friendship/love story. Director John Tiffany, choreographer Steven Hoggett and music supervisor/orchestrator Martin Lowe bring such sensitivity, joy and genuine emotion to their adaptation that it turns out to be – perhaps it’s sacrilege to say – better than the original.

Once scored 11 Tony nominations in 2012 and won eight, including best musical, which virtually ensures a national tour. So now we have the road company of Once settling in at the Curran Theatre as part of the SHN season.

As on Broadway, Bob Crowley’s set is a rather impressionistic version of a Dublin pub (lots of lights and tarnished mirrors), and as on Broadway, the pub is open before the show and at intermission to sell beer and wine. If you go early enough before the show, be sure to enjoy your drink on stage (the “bouncers” limit the number of folks on stage so do get there early). About 10 minutes before the show begins, the actor-musicians arrive and begin playing Irish pub songs. 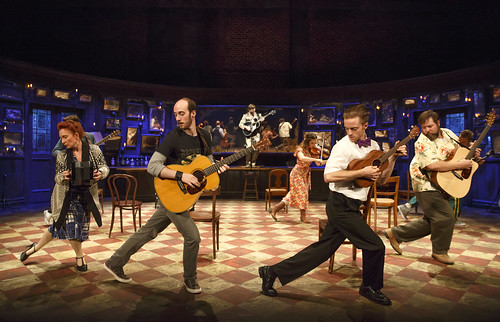 This is all part of director Tiffany’s genius method of closing the gap – literally and figuratively – between actors and audience. He wants his audience active and involved, so when he asks us to hold multiple realities, we do so eagerly. The performers are characters in the story and they’re musicians. They’re specific people and they’re all people. The pub is, in fact, a pub, and it’s also an apartment crowded with Czech immigrants, a vacuum repair shop, a recording studio, the office of a bank loan officer, a hilltop, a beach. Some musical numbers are actual musical numbers performed in a specific place, like on a street corner or at a pub’s open-mic night. Others are pure expression of feeling and are physical manifestations of emotion.

It may sound complicated, and it is to a degree, but it’s completely accessible because Tiffany’s staging and Hoggett’s movement are so clear and convey so much. The same is true of Lowe’s arrangements, beautifully performed by the ensemble on guitars, violins, cellos, accordions and percussion. The sound is warm and passionate and so intense you sometimes want to join the dancing and the playing because watching isn’t enough (whether or not you’re a dancer or a musician hardly seems to matter).

The number at the end of Act 1, “Gold” (written by Fergus O’Farrell), is a prime example of why Once works so well and on so many levels. The set-up involves the Girl (Dani de Waal) pushing her new friend (Stuart Ward) to perform one of his songs on a pub’s small stage. She believes he is “stopped” in his life, the result of a bad break-up, and she senses that his music is the way to un-stop him. He begins singing the song, and she’s mesmerized by him. The audience begins to play along with the singer, and as the passion builds, the musicians rise from their chairs and dance and play. It’s electric and stunning and conveys a sense of what it feels like to be caught up in music and what it might feel like to be creating great music with a group. It’s like Once itself: there’s synchronicity, true connection, glorious music and utter transcendence.

[bonus interview]
I talked to director John Tiffany and choreographer Steven Hoggett for a story in the San Francisco Chronicle. Read the feature here.