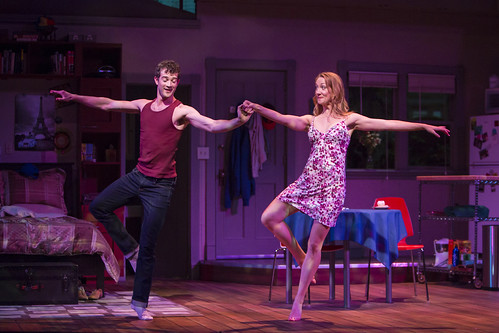 A.J. Shively is “Him” and Sharon Rietkerk is “Her” in the two-person Stephen Sondheim musical Marry Me a Little, a TheatreWorks production running through June 29 at the Mountain View Center for the Performing Arts. Photo by Tracy Martin


Even Stephen Sondheim’s cast-offs are sturdy enough to carry a show on their own. At least that’s the case with Marry Me a Little, a 1980 revue created by Craig Lucas and Norman René. The show collects odds and ends from Sondheim’s career, including songs cut from some of his big shows (Follies seems to have lost an extraordinary number of good songs), written for one-off projects or salvaged from flops.

The resulting show, using only songs and no dialogue, tells the story of two lonely neighbors on a Saturday night. The original location was New York, but the new TheatreWorks production directed by Sondheim-o-phile Robert Kelley moves the action to San Francisco and takes every opportunity to have its attractive actors shed clothing. In other words, it’s aiming to be young, hip and sexy, and by and large, that tact succeeds.

I reviewed the show for the San Francisco Chronicle:

It’s hard to imagine two more appealing performers than Sharon Rietkerk and A.J. Shively. If there’s amplification in the theater, it’s so subtly and expertly done (by sound designer Brendan Aanes) that it seems we’re simply hearing two beautiful voices and a piano. Every lyrical nuance is clear but unforced, and that’s a supremely satisfying way to experience Sondheim.

So often musical revues are just cheesy excuses to sing a lot of songs, but “Marry Me a Little” is distinguished by its notable lack of cheese. Director Robert Kelley never lets the naturalism of single people going about their Saturday night business get forced or silly, even when the song “Pour Le Sport” turns into a his-and-her round of video game golf.

One thing I didn’t get to say in the review was how effectively set designer Bruce McLeod incorporates musical director/pianist William Liberatore into the set. Liberatore actually “plays a role” as a neighbor who happens to love Sondheim and plays his songs continually (how convenient!). We see him in his home at the piano surrounded by Sondheim show posters (Merrily We Roll Along, Sweeney Todd), and right about at eye level on the wall next to the piano, is a framed photo of Sondheim himself. Such a nice touch.

FOR MORE INFORMATION
TheatreWorks’ Marry Me a Little continues through June 29 at the Mountain View Center for the Performing Arts, 500 Castro St., Mountain View. Tickets are $19-$73. Call 650-463-1960 or visit www.theatreworks.org.