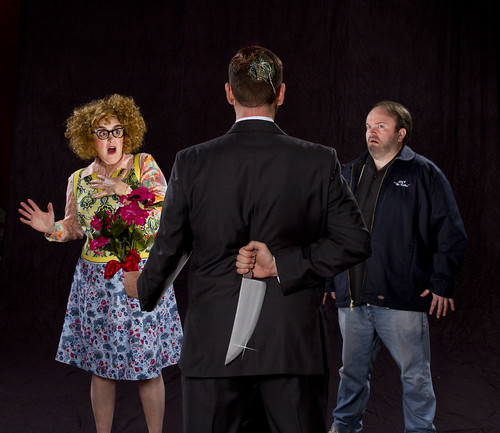 
There’s a lot of old-fashioned musical theater charm in Mr. Irresistible, a new musical by D’Arcy Drollinger and Christopher Winslow now having a short run at the Alcazar Theatre. It’s a new-fashioned musical in the sense that there’s camp, drag, sass, murder and a ménage à trois, but there’s also a sort of sweet familiarity to it all that keeps everything grounded in the realm of appealing musical comedy.

Winslow’s appealing music and Drollinger’s smart book and lyrics are what might happen if you cross Little Shop of Horrors with 9 to 5. There’s lonelyheart misery and workplace nastiness combined with a little sci-fi robotics to make it a little more interesting.

The central character, Eileen, is someone we’ve seen before: a doofus who just can’t win. Her love life (what love life?) pales in comparison to the bodice-rippers she reads so ardently. And what with her mop of curls and her inability to tone down clashes in her personal wardrobe, she’s an object of ridicule in the big corporate office in which she’s been a temp for four years.

One of the score’s highlights occurs early on when we meet the mean girls (and the mean gay mail boy) of the office in “WORK!,” which shows off the skills of the cast in capturing the zippy campy comic tone of the show. It also shows off the sparky choreography by Drollinger and John Paolillo.

Tired of being miserable, Eileen takes action and orders herself a Mr. Irresistible robot, which promises to be the ultimate boy friend, seeing to her every need and making her happy whatever the cost. 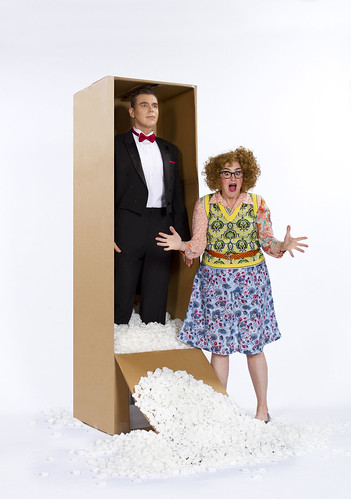 Eileen could be a real dolt, but she’s not because she’s played by Cindy Goldfield, a performer so delightful and disarming she couldn’t be a dolt if she tried. In the Carol Burnett/Imogene Coca mold, Goldfield knows exactly what to do with the character to give her heart and comic chops. She has a sweet voice and a way to get you rooting for Eileen, especially as the world around her comes crashing down in bloody waves.

It’s clear from the start of this nearly 2 1/2-hour show that Eileen should be with Joe, the exterminator (the wonderful Colin Thomson), but because he doesn’t conform to romance novel standards, he’s cast aside, much the way Eileen is at work by her coworkers. Instead, Eileen succumbs to the digital charms of Mr. Irresistible, played with sinister élan by Steven Shear. When Eileen casually mentions she could “just strangle” an annoying co-worker, the robot takes her request literally. And so begins the bloodbath.

But even as the bodies pile up, this musical, under the direction of Jonathan Carpenter remains resolutely upbeat. The zippy pace is helped tremendously by the video projections created by Richard Neveu, which add a strong sense of place and humor to the proceedings. I’m not generally a fan of such heavy use of projections in a live theater setting, but when a show is on a budget and the projections are this slick, it’s hard to resist them. Just as it’s hard to resist the supporting cast, which includes James M. Arthur as Billy, Jessica Coker as Tina, J. Conrad Frank as Kat, Kristen Iuppenlatz Grech as Jan, Eliza Leoni as Debbie and the indispensable Joe Wicht as Mr. Abernathy.

As delightful as Mr. Irresistible is, this is still clearly a show in progress. Some numbers go on too long and others will likely not make the next cut. There’s a loss of focus and momentum in the chaos of Act 2, which bleeds some oomph from the ending. But the charm and dazzle is ever present, making Mr. Irresistible live up to its name. It seems highly likely we’ll be hearing more about this lively show in the very near future.