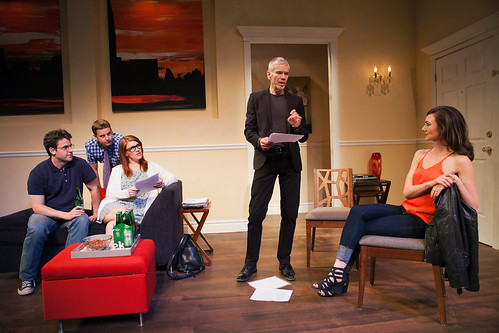 The cast of San Francisco Playhouse’s Seminar by Theresa Rebeck includes (from left) James Wagner as Martin, Patrick Russell as Douglas, Lauren English as Kate, Charles Shaw Robinson as Leonard and Natalie Mitchell as Izzy. Below: Leonard and Kate surprise Martin (and themselves). Photos by Jessica Palopoli


The ego, the insecurity and the courage of fiction writers are all on hilarious and intriguing display in Theresa Rebeck’s Seminar, a one-act comedy that derives laughter from pain and theatrical pleasure from whiplash-smart word play.

The premise is simple: four New York writers have paid $5,000 each for 10 weekly classes with a famous writer. They meet in the beautiful (and rent controlled) apartment of one classmate and wait anxiously for the globe-trotting famous guy, who can’t really be bothered to remember their names, to pass judgement on their work.

Anyone who has ever written anything will feel the body blows as Leonard (Charles Shaw Robinson), the teacher, rips the writers to shreds. But the great thing about Rebeck’s play is that while she’s focusing on writers, a particularly intense and vulnerable artistic breed, the cruelty inflicted by someone with power on those without is immediately recognizable and relatable. That’s why the play is so damn funny.

Director Amy Glazer, who directed Rebeck’s The Scene for SF Playhouse (as well as that play’s subsequent film adaptation, Seducing Charlie Barker), knows exactly what to do here to achieve heightened realism. Her pacing is sharp, and her cast is superb. The actors’ ability to handle the comedy and then make it all devastatingly real is pitch perfect. 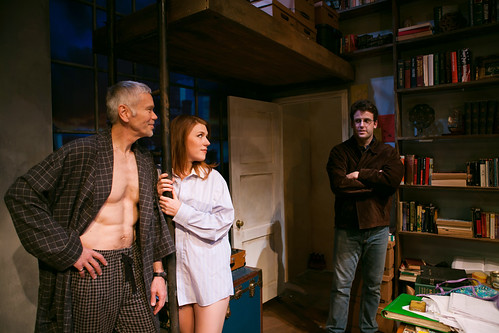 Take Lauren English’s Kate for instance. She’s been laboring on the same story for years, and when Leonard has especially unkind things to say about it, she is devastated and turns to ice cream and potato chips for solace. Kate could turn into something from a “Cathy” cartoon strip, but the character is more interesting than that, and English finds all the heart and intelligence and occasional ferocity she has to offer.

There are some initially broad stereotypes here among the writers – Natalie Mitchell as the sex-forward Izzy, Patrick Russell as the puffed-up literary scion Douglas, James Wagner as Martin, a frightened, nearly defeated everyman – but they all emerge with more complexity as the play evolves. Even Leonard, so believably inhabited by Robinson, is more than just ostentatious cruelty. There’s a damaged, serious artist here, and we get glimpses of him from time to time.

In the end, Rebeck narrows her focus down to two characters – not the two who interested me most – and her ending seeks redemption that feels hollow. But with performances this good and a production this solid, the ending is a minor glitch. What comes before is a funny, incisive Seminar that is well worth taking.

[bonus interview]
I interviewed playwright Theresa Rebeck for a story in the San Francisco Chronicle. Read the feature here.