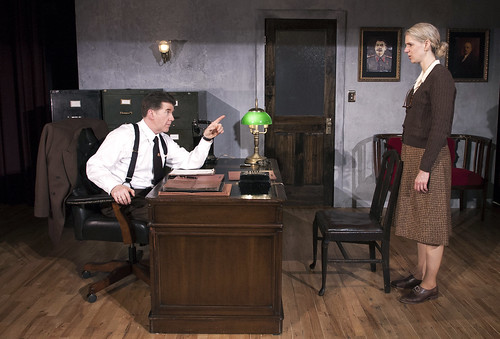 The Director (Michael Ray Wisely) tangles with his employee Anna (Beth Wilmurt) in the Aurora Theatre Company production of The Letters by John W. Lowell, the first play in the Aurora’s second performance space, Harry’s UpStage. Below: The confrontation between the Director and Anna grows in intensity. Photos by Sarah Roland


After hosting three cabaret performances, the Aurora Theatre Company’s rehearsal/black box/office space (the Dashow Wing, to be specific) known as Harry’s UpStage at last beings life as a playhouse. The first play in the space, John W. Lowell’s The Letters, a tense, 75-minute two-hander about abuse of power and the triumph of smart people.

Director Mark Jackson is known for his kinetic, dynamic productions, but this time out he’s confined to one small office (1930s-era Russian Ministry utilitarian decor by Maya Linke), and for most of the play, the Director (Michael Ray Wisely) sits at his desk and subordinate Anna (Beth Wilmurt) sits across from him and we see them in profile. They sit side by side on an uncomfortable love seat (an ironic name) for a bit, but this is mostly a face-to-face confrontation, so creating a tense atmosphere is important.

From the outset, as Anna waits alone in the office, Jackson establishes a tone of discomfort for us and for Anna. The Director, a career soldier who has moved up in the Stalinist hierarchy, makes it a point never to be uncomfortable. He has the power and boy does he know it. That leaves Anna to squirm and figure out just why she has been called into this meeting. Has she done something wrong that will lead to arrest and brutality? Has she been implicated in a colleague’s dastardly scheme? Or could she possibly be getting a promotion? 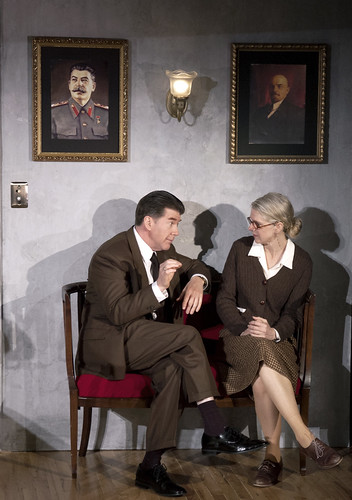 It’s all possible, and as the truth comes out, it’s not all that surprising that lies, violence and overweening governmental control are all in play. There aren’t a lot of surprises in Lowell’s play, though it offers the pleasure of a good mystery thriller with a few satisfying twists. And the way he incorporates Tchaikovsky’s life and sexuality into the action is most intriguing. There’s nothing like a good sex scandal no matter how antiquated.

Wisely’s Director, who carries a chip on his shoulder about being an uneducated soldier in a Ministry full of nerdy intellectuals, looks like a cross between Stalin and Ronald Reagan, which is just about perfect. His attempts to be convivial and folksy are downright creepy. No man in his position can just joke around, and that is eminently clear on the face and in the body language of Wilmurt’s Anna, an “intellectual version of the perfect foot soldier,” as the Director describes her. She has lived her life pretty much by the rules, and this meeting, no matter how friendly it may seem, is fiendish in the way you imagine all such meetings were in Soviet Russia. One wrong word and you’re in Siberian Gulag or worse.

That reality underlies Anna’s every word and action, and Wilmurt plays the tension beautifully. She’s the humanity going up against the stone cold government, and it’s gratifying to see her strength and intelligence emerge to fight the power, even if the fight seems impossible to win.