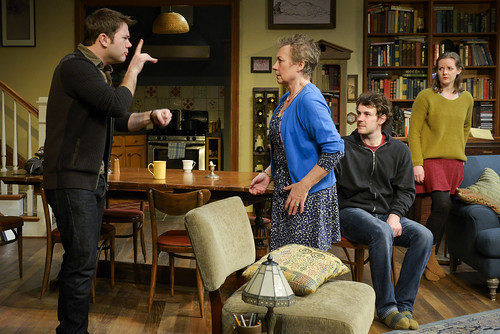 
There is not another drama about family, about communication, about the very essence of language like Nina Raine’s Tribes. The 2010 British play now on Berkeley Repertory Theatre’s Thrust Stage is among the funniest, most moving and deeply engaging shows we’re likely to see this year

We’ve seen unruly, contentious, loud families like the one we meet here: Dad is a pompous ass of a writer, Mom is a squeaky wanna be writer, brother Dan and sister Ruth have both struck out in the real world and are back at home fighting and wrestling like 8-year-olds. Only brother Billy, who has been deaf since birth, seems like a reasonably sane person, and that may only be because he doesn’t participate in the high-decibel screaming and joking and carrying on.

It’s easy to think that Billy is the lucky one here, removed from the petty day-to-day dramas that seem legion in this cluttered household (the wondrously realistic set, crammed with books, is by Todd Rosenthal). Everyone but Billy is kind of whiny and annoying, but credit Raine, along with director Jonathan Moscone and his superb cast for allowing warmth and real familial connection to seep through the pettiness and egotism.

Paul Whitworth and Anita Carey are parents Christopher and Beth, who have raised their deaf son as just another member of the family, which is to say he was not treated as someone with a handicap. He was taught to speak (with the help of hearing aids) and to read lips but not to sign, which was something they felt might marginalize him.

As Dan, Dan Clegg at first presents an image of 21st-century malaise, a slacker 20something struggling through a pointless dissertation and living back at home with the folks. Elizabeth Morton’s is in a similar state. She’s trying, rather halfheartedly, to be an opera singer, but really she’s thriving on all the familiar drama she’s helping to create. 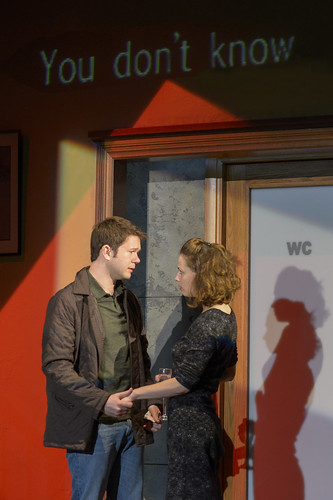 Billy, played by the absolutely extraordinary James Caverly in his third production of this play, is a skilled lip reader, but he can barely keep up with the light-speed verbal acrobatics practiced by his family, all of whom seem to think they’re in some sort of warped Noël Coward play about a hoity-toity country family.

Then something extraordinary happens: Billy starts to become his own man. He begins to experience the world on his own terms, and suddenly the shelter of his family seems to be holding him back. This new chapter is spurred by a chance meeting at an art exhibit for a deaf artist. Billy meets Sylvia (the invaluable Nell Geisslinger), the child of two deaf parents who is slowly – and agonizingly – losing her hearing. Through Sylvia, who has been connected to the deaf community her whole life, Billy learns that as someone born deaf, he’s at the top of the social heap, but the fact that he doesn’t sign works against him. Sylvia, on the other hand, is much lower in the social hierarchy because she was born hearing, but her signing skills are top notch.

It’s a tricky world, but it’s a world that ignites something in Billy. He’s not only in love with Sylvia but also with a new world where he can be part of a social group, where he can be listened to and where he can make his way on his own. In other words, Billy is growing up amid tremendous complications. It’s rough, but it’s also absolutely necessary, and Billy may discover that he’s more a part of his family tribe than he (or they) realizes.

Moscone’s production is pitched so perfectly it’s easy to get lost in this family. As aggravating as they can be, they’re not without compassion or charm. There’s abundant humor (some of it delightfully crude) here. Flaws and mistakes and self-delusion and mental illness are all part of the mix, and finding a way to talk about it all, let alone deal with it, seems to be a challenge for everyone. Words – spoken, signed, whispered or unspoken – and emotions run deep, which is ultimately why Tribes is so powerful and its echoes reverberate long after the final scene.