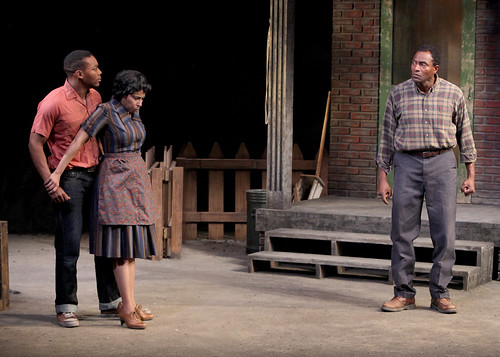 The cast of Marin Theatre Company’s Fences by August Wilson includes (from left) Eddie Ray Jackson as Cory, Margo Hall as Rose and and Carl Lumbly as Troy Maxson. Below: Lumbly and Hall are joined by Steven Anthony Jones as Jim Bono. Photos by Ed Smith


I’ve always been moved by August Wilson’s Fences, the 1950s installment of his extraordinary Century Cycle of plays depicting African-American life in the 20th century. But the current production of the play at Marin Theatre Company under the direction of Derrick Sanders made me feel the play in a whole new way.

This has largely to do with Carl Lumbly’s wrenching central performance as Troy Maxson, a complicated man whose life is ruled by ego. And that’s what struck me about this production: how much the play is about the destructive nature of ego – not the “I’m so great, look at me, check out my Google Glasses” ego but rather the insidious part of ourselves that divorces us from real life and forces us to live under the weight of preconceptions and regrets and fear and walled-off (perhaps fenced-off is more appropriate) emotion.

Troy has seemingly done everything right. He survived a gruesome childhood with a shabby father, struck out on his own and, after fighting the rampant racism of the early 20th century, nearly making it in baseball minors and surviving incarceration, finally put down roots inn Pittsburgh’s Hill District. He wasn’t a father to his first son, Lyons, whose childhood flew by while Troy was in prison. But with wife Rose, a saving grace in his life, he raised a second son, got a steady job as a garbageman and made a home for his family.

That’s the history of a good citizen, maybe not someone who started out that way but who eventually took responsibility for himself and his family in a big way. So what’s wrong with that? Plenty, and that’s what makes the Pulitzer Prize-winning Fences so interesting. Troy is a proud man, an angry man who fights to live the life he thinks he should and struggles hard when it feels like parts of him are dying. 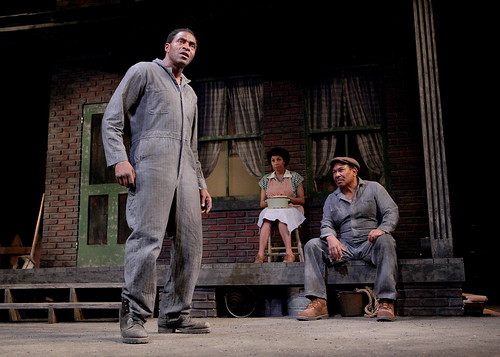 Lumbly’s performance is so powerful and so achingly real, it’s easy to see why Rose (a fine Margo Hall) and son Cory (Eddie Ray Jackson) are afraid of him to varying degrees. They aren’t really allowed to be themselves (just as Troy isn’t able to be himself) but rather the image he holds of them. Rose isn’t a person so much as a person to be loved, protected and provided for, and Cory isn’t a talented football player whose skill could be his ticket to college but rather a young black man who will have to fight, like Troy did, to make his way in the world.

Troy’s vision of his life has been pretty easy to uphold for nearly two decades, but unsupported facades fall away, and that’s where we are in Fences as secrets, resentments and outright hostilities send everything crumbling down.

Wilson’s set-up in the first act can get a little draggy, but once Troy is challenged – first by his son, then by his wife – the action and the emotional wallop are significant.

Sanders’ cast, which also includes Steven Anthony Jones as Troy’s best friend, Tyee Tilghman as Troy’s first-born son, Adrian Roberts as Troy’s damaged brother, Gabriel, and Makaelah Bashir and Jade Sweeneysharing the role of Raynell, is as sturdy as it gets, even though the drama belongs mostly to Lumbly. Later in the play, though, Wilson hands the play to Rose to bring everything into perspective, and Hall handles the shift with her usual grace and vigor.

Fences is a great American drama about the true cost of doing the “right” thing and living the life you think you should live rather than the life you’re actually living. That’s a fascinating clash and one that will remain relevant as long as we’re operating under the illusion of the American Dream.