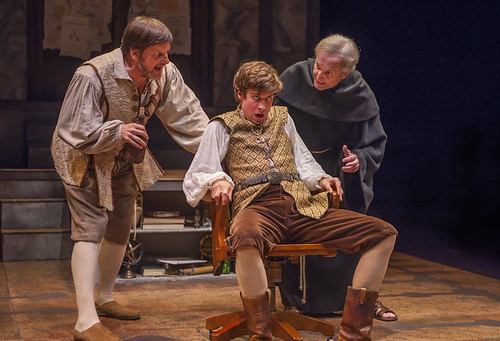 
You don’t have to have a college degree to enjoy David Davalos’ Wittenberg a the Aurora Theatre Company, but it sure will help.

If 16th-century academia is your thing, then you probably already know all about Wittenberg, the German university made famous as the seat of higher learning from which young Prince Hamlet of Denmark returned home after his father’s murder.

Wittenberg also happens to be where Martin Luther, an Augustinian monk, theologian and lecturer, nailed his 95 provocative thoughts on a church door and sparked the Protestant Reformation. And, to keep things interesting, the hallowed university happens to be where Christopher Marlowe’s fictional Dr. Faustus practiced his dark arts.

With such a confluence of fictional and factual famous folk, it’s surprising that it was only in 2008 that a playwright smart enough to put it all together and create a campus comedy with serious underpinnings.

There’s no question that Davalos’ Wittenberg makes for good comedy – at times it’s split-your-tights funny – but this clever playwright is after something more than just laughs. OK, so every Animal House-type college stereotype comes into play at some point. In fact John Faustus, a cool philosophy prof, also performs on his lute down at the Bunghole. It’s a two-stein minimum and all the tripe you can eat. Ba dum bum.

Or when Martin Luther is beginning his theology seminar, he announces that if you’re in league with devil, Faustus’ philosophy seminar is just down the hall. In Room 2B no less. 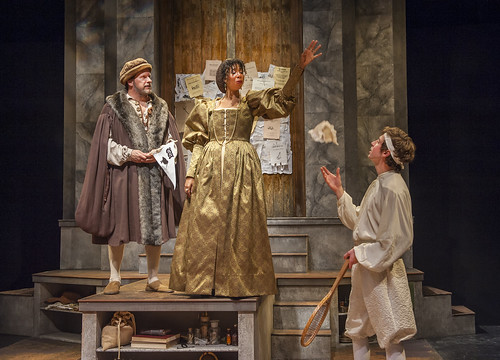 But Davalos has tucked quite a serious existential debate right behind the laugh lines (the play’s subtitle is “A Tragical-Comical-Historical in Two Acts”). Luther and Faustus are colleagues, friends even, but they are radically opposed in their beliefs. Luther is a company man, or, more to the point, a Church man. Anything the big Church says, goes, except that he has his doubts and questions and problems with the way Pope Leo is running things from Rome. And, by the way, what’s up with Purgatory? Still, he’s all about faith and doctrine.

Faustus on the other hand, is all about independent (but rigorous) thought, a free spirit and embracing the mystery of life. He really digs that Copernicus has recently reported that the Earth is not the center of the universe as previously thought but rather the little blue planet revolves around the sun.

Under the direction of Josh Costello, Act 1 of this two-plus-hour production gets off to a bold start, skirts a few dry patches, and then rolls confidently to its conclusion in Act 2. There’s not much plot to speak of unless you know what’s coming for each of the three famous dudes (Martin Luther’s Theses, Faustus’ deal with the devil and Hamlet’s bloody homecoming), but Davalos keeps things interesting in Act 2 with a lively tennis match (Hamlet vs. a cranky Laertes) and a hilarious, expertly choreographed sex scene spliced with a sermon by Martin Luther.

Dan Hiatt as Martin Luther all but steals the show because his performance is so nuanced. This Martin Luther is no stick in the mud – he’s firm but thoughtful, and Hiatt gives the man depth of soul that makes you feel his every word. Michael Stevenson as Faustus is like a rock star professor but a really smart one who knows his way around a good punch line.

And Jeremy Kahn as Hamlet is suitably tortured (of course the moody Dane hasn’t yet declared a major) by the grudge match Faustus and Luther are fighting over his soul. When Hamlet feels like he’s losing his mind, it’s pretty easy to see why that might be the case.

Adding some fun to the mix of merry men is Elizabeth Carter in a number of roles, including Helen, Faustus’ love. She’s a free and spirited woman, way ahead of her time and unwilling to forgo the freedom that John so prizes, even if it means she can’t become his wife.

Here, history and comedy collide with fact and fiction, with poetry and science mashed in for good measure, making Wittenberg, the university and the play, a beguiling spot for some higher learning.

FOR MORE INFORMATION
David Davalos’ Wittenberg continues an extended run through May 11 at the Aurora Theatre, 2018 Addison St., Berkeley. Tickets are $32-$50. Call 510-843-4822 or visit www.auroratheatre.org.

2 thoughts on “To laugh or not to laugh: that’s the question in Wittenberg”