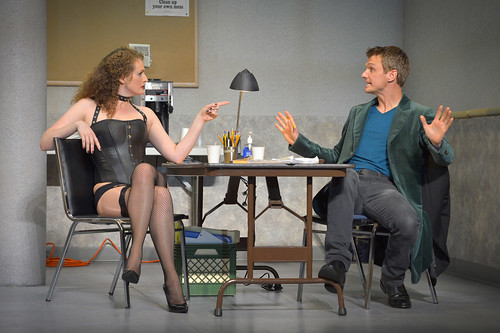 David Ives’ Venus in Fur, playing at ACT’s Geary Theater, stars Brenda Meaney as Vanda, an actress full of surprises, and Henry Clarke as Thomas, a director who doesn’t know as much as he thinks he does about his own work. Below: Vanda and Thomas act out a scene from a play based on Leopold von Sacher-Masoch’s 1870 novel, Venus in Fur. Photos by Kevin Berne


Is it just me, or is it hot in this theater?

Live theater is not usually a hotbed of eroticism – so often attempts at sexiness inspire laughs more than they do accelerated heart rates – but the Bay Area of late has been home to some theatrical sexy time. First we got hot and heavy with polyamory in Carson Kreitzer’s Lasso of Truth at Marin Theatre Company (read my review here), which featured Wonder Woman’s creator happily submitting to the many strengths of his wife and his girlfriend (who also generated their own heat independent of him).

All of that is interesting, but what’s really great about Fur is how it cuts deep into the very nature of acting and that tricky, shifting line between what is performance and what is reality.

“You don’t have to tell me about sadomasochism,” the young woman says. “I’m in the theater.” Cue the big laugh. That’s certainly one way to get the audience inside a tense and ticklish pas de deux that does indeed hinge on S&M, specifically the variety found in the 19th-century novel Venus in Fur by Leopold von Sacher-Masoch, whose name was borrowed to coin the term “masochism.” Rather than simply adapt the 1870 novel for the stage, Ives turns it into a play within a play. 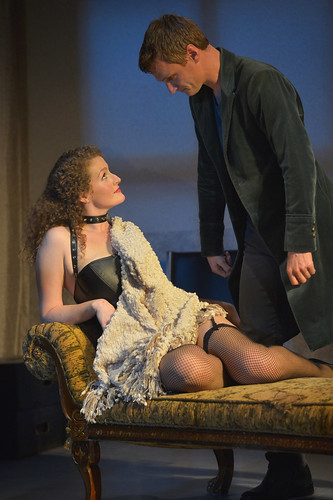 But then, like an answer to a prayer, she arrives. Stumbling into the bunker-like rehearsal room (John Lee Beatty re-creating his Broadway set) comes a ball of frantic, chaotic energy whose name, Vanda (Brenda Meaney), happens to be that of the main character in the play. Because of a rain storm and subway delays, she’s many hours late for her audition (if, indeed, she ever actually had an appointment).

Vanda has quite a bag of tricks from which to pull, and from the moment she breathes life into the character, Thomas doesn’t stand a chance.

Meaney gives a remarkable performance as Vanda. It’s a sexy, edgy role full of intelligence and revelation, and she’s more than up to all of it. Clarke is terrific as Thomas as well, but the fireworks come from Meaney primarily because her character ends up being in charge of this intimate experience, which begins with the usual director-actor power dynamic (with the director calling all the shots) but evolves into something much more complex, with Vanda directing the whole thing, both in theatrical terms and in “real” life terms. There’s chemistry between these two actors, which helps considerably as director Casey Stangl effectively blurs lines and power dynamics as the 90-minute play progresses.

Ives’ resolution is ultimately disappointing, but, strangely, it doesn’t diminish the “delicious cruelty” that has come before it.

[bonus interview]
I talked to Venus in Fur playwright David Ives for the San Francisco Chronicle. Read the story here.