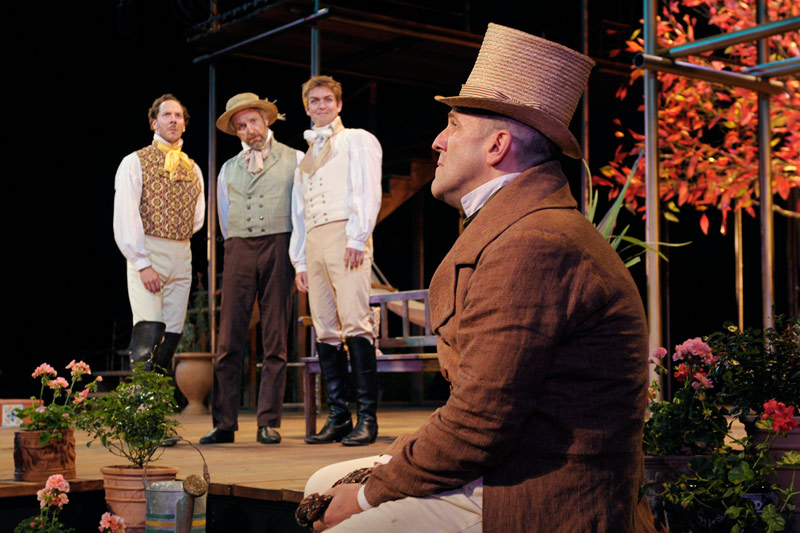 Andy Murray (right) as Benedick re-thinks his bachelor ways, much to the amazement of (from left) Nicholas Pelczar, Dan Hiatt and Nick Childress in Cal Shakes’ Much Ado About Nothing. Photo by Kevin Berne. Below: Danny Scheie as Dogberry. Photo by Jay Yamada

Much Ado About Nothing can be one of Shakespeare’s trickier romantic comedies. It’s full of sparring lovers, great lines and thoroughly entertaining comic bits. But it also contains some harsh drama, faked death and edgy mischief making. Capturing just the right tone can help ease the audience through all those shifts, and that’s what eludes so many directors of the play.

Thankfully, California Shakespeare Theater Artistic Director Jonathan Moscone finds fresh ways to meld all of Shakespeare’s fragments into a seamless and captivating whole. The darker hues seem perfectly comfortable alongside the bright comedy, and the romance bursts with charm and appeal. If you’re looking for a late-summer fling, head straight for the beautiful Bruns Amphitheater in Orinda.

There’s a warm autumnal hue surrounding Moscone’s production. Russell H. Champa’s lights lend a burnished glow to the Italian escapades on stage, and Daniel Ostling’s set, with its copper piping and airy construction, is alive with greenery, both real (the potted flowers and landscaping are courtesy of Will’s Weeders, the Bruns’ resident gardeners) and artificial. At the center of the stage is shimmering, manmade red-leafed tree, whose leaves occasionally flutter to the ground.

Even the cello music in Andre Pluess’ sound design is festive with a tinge of melancholy, and that’s just perfect.

All these design elements create a world in which Beatrice, a woman who thinks love has passed her by, can turn her merry war of words with Benedick into a later-life love story. It’s a world where the nasty malcontent Don John can play a brutal trick on innocent people. And it’s a world where a word-mangling sheriff can nearly walk away with the play.

The villainous Don John and Dogberry, the master of malapropisms, are played by a single actor, Danny Scheie, and his virtuoso performances ignite sparks in the play where there are rarely sparks. Don John is so often played as simply a means to a plot-twisting end, but Scheie takes such joy in the man’s misanthropy and relishes each line so much that he becomes an irresistible baddie. It’s almost a shame that Don John disappears in the play’s second half, but that absence affords Scheie the opportunity to sink his teeth into Dogberry, a character frequently defined by his hilarious inability to use words correctly.

Scheie doesn’t go that route. Almost surprisingly, he lets the verbal comedy become secondary to the character’s personality. In Scheie’s expert hands, Dogberry is not a bumbler. He’s a professional working at the top of his game – or so he thinks. There’s a certain arrogance in the man that comes from the pride he takes in his work as well as an unmistakable passion to be the best constable imaginable.

The fact that we see how inept this man is heightens and deepens the comedy. It’s a masterful creation, and Scheie is a wonder.

In any Much Ado we expect Beatrice and Benedick to hurl insults at one another with comic aplomb. Dominique Lozano and Andy Murray do that and a whole lot more. Lozano shows us a strong, vivacious woman who is boldly attempting to buck the notion of a spinster, while Murray gives us a man’s man who is aching to find a soulmate. Both are utterly charming actors, so it’s no surprise they spend so much time beguiling the audience – especially Murray in his asides. At one point, his exuberance leads him to kiss an audience member.

I saw Murray play Benedick at Lake Tahoe’s Sand Harbor about 14 years ago, and though he was good then, he’s great now. He finds nuance in each line, and the character feels lived in.

This Much Ado is nearly three hours but feels much shorter. That’s a testament to Moscone’s beautifully calibrated production and the excellent work of the ensemble, which also includes a fiery Andrew Hurteau as Friar Francis, Dan Hiatt as Leonato, Emily Kitchens as Hero and Nick Childress as Claudio.

It’s a spectacularly lovely production (the gorgeous late-summer weather on opening night sure didn’t hurt) and a sumptuous end to another great Cal Shakes season.

Cal Shakes’ Much Ado About Nothing continues through Oct. 15 at the Bruns Amphitheater in Orinda, just off Highway 24, one mile east of the Caldecott Tunnel. Tickets are $34-$70. Call 510 548-9666 or visit www.calshakes.org for information.