Continues an extended run through July 27 at Theatre Rhinoceros 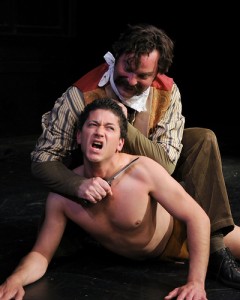 Michael Vega is Ishi and Chris Libby is a settler attempting to cash in on the State of California’s reward of $5 for an Indian’s head in John Fisher’s Ishi: The Last of the Yahi at Theatre Rhinoceros. Photo by Judi Price.

It’s been too long since I saw a John Fisher show. Eons ago, I became a fan of Fisher’s through The Joy of Gay Sex and Medea: The Musical, and his wild outdoor production of Titus Andronicus in Yerba Buena Gardens remains one of my favorite evenings of Shakespeare ever.

Fisher is the artistic director of San Francisco’s Theatre Rhinoceros, the longest continuously operating queer theater anywhere, and running a theater has been a great outlet for Fisher to try out his new plays.

The most recent is Ishi: The Last of the Yahi, a “fiction based on fact” account of a local slice of anthropological history. If you know your California lore, you may remember that Ishi (a name given to him by his scientific captors that means “man” in Yahi) was the last member of a tribe of Native American Yahi in the Mill Creek/Oroville area. In 1911, after his tribe had been decimated and his family completely destroyed, he wandered into town fully expecting to be killed.

Instead, he was captured and turned over to University of California anthropologist Alfred Kroeber, who studied Ishi until the Native American died of tuberculosis in 1916.

Rather than just tell the story of Ishi, which has been explored in a number of books and movies, Fisher is aiming for something big and harsh and implicating. He wants to remind us, as one character puts it, “as Californians we are living in the wake of genocide.”

The character of Ishi recalls his life in the wilds of California as he and his people became the prey of white hunters aiming to cash in on their elimination. The city of Oroville would pay 50 cents for an Indian scalp, but the big money came from the State of California, which paid $5 for an Indian head.

Fisher, with his customary directorial brio, stages chases through the forests and out-and-out war between Indians and the white settlers all through the Theatre Rhino auditorium. This is a violent story enacted with gusto (though no stage blood is spilled, leaving all of that to our imaginations, which is enough) and horror. We are there for the massacre of families in a cave with nowhere to run. We see a castration, rape, incest, cannibalism and any number of atrocities. In short, we get the point. If we ever thought California was a wild wonderland that welcomed settlers with open arms, we’ll certainly think differently now.

Fisher’s dynamic direction keeps the story moving and pulsing, which is a good thing. This play is three hours and 15 minutes long. That’s too long, of course, and there’s material to trim, especially in the relationship between the Kroeber (Kevin Clarke) and Kroeber’s tubercular wife (Jeanette Harrison). They’re interesting people (he’s an egomaniac, she’s a suffragette), but their doomed love affair takes too much time away from Ishi (a compelling Michael Vega).

There are some elements of Pygmalion here, with Kroeber as Higgins, Ishi as Eliza and Dr. Thomas Waterman (Aaron Martinsen) and Dr. Saxton Pope (Matt Weimer) as versions of Col. Pickering. But instead of the Embassy Ball we get infanticide and massacres.

This is a fascinating story, and Fisher’s Ishi brings up so many issues — the validity of the historical record, the effect of greed and ego on scientific work, the general ignorance and blood lust of the white man — it seems there may be more than one play here. And you leave the theater wanting to know more but feeling wary of any source you might turn to for information.