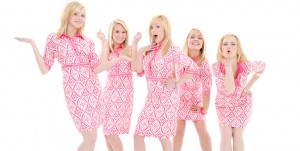 There they are, the five finalists in MTV’s “Legally Blonde the Musical: The Search for Elle Woods.” They are, from left, Rhiannon, Bailey, Natalie, Lauren and Autumn. Someone please make the pink blondeness end! Photos courtesy of MTV

Could a dumb reality show be any more tear filled? Last night’s episode of MTV’s “Legally Blonde the Musical: The Search for Elle Woods” was like musical theater crossed with Hamlet. I don’t think there was one girl who didn’t weep copiously.

So we’re down to five girls: three blondes (Lauren, Bailey, Rhiannon) and two brunettes (Autumn, Natalie). Well that all changed when the girls got Elle Woods make-overs. The blondes got blonder and the brunettes lost IQ points by actually becoming blondes. But that wasn’t the big news from the salon. No, the earth-shattering news was that Bailey WEPT because she had an inch trimmed from her tresses. Yes — tears over a change in hair length only she could possibly notice.

Then the girls went to a photo shoot and had some quality time with the musical’s original (and in desperate need of a rest) Elle Woods: Laura Bell Bundy. One thing this ridiculous exercise in casting has done for me is given me a whole new appreciation for Bundy — who was terrific in the role, even at the beginning when the show had its pre-Broadway run at San Francisco’s Golden Gate Theatre. She’s mature — a real pro with dignity, comic chops, solid moves and a great attitude. Turns out finding someone to fill her shoes is a lot harder than it might seem.

When talking about playing Elle — the best experience of her life, she said — Bundy teared up — the only deserved tears of the whole evening.

After the photo shoot, Natalie won the opportunity to have a meal with Blonde cast member Andy Karl, which was supposed to give her an advantage in the audition scene the girls would go on to perform with him (he’s the understudy for the leading man in addition to playing the adorable UPS Guy and begin married to co-star Orfeh in real life). As usual, this “advantage” was a crock. None of these ridiculous “advantages” have ever proved to be worth anything. 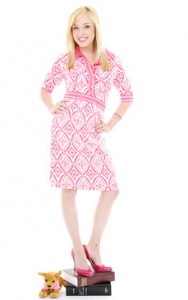 Sure enough, in performance, Natalie (right), even with her blonde locks, was a dud and had no chemistry with Karl. Autumn rocked the audition (where has that voice been hiding?), as did Lauren. Rhiannon was a disappointment because of wonky vocals, and Bailey was like an Elle automaton.

Here’s what I hate about reality shows (not just this one): in an attempt to grab our attention, the host and the judges behave as if their duties are the most weighty and important in the whole universe. Judge Bernie Telsey, while chastising Natalie, Bailey and Rhiannon (who cried herself a river) in the casting office, came across as the chief of a parole board hearing. As if anyone outside of that room really cares at all who goes home.

[SPOILER ALERT] It was no surprise to see Natalie hit the pavement. Poor thing is a blonde now. Life won’t be easy for her. Vocal coach Seth Rudetsky had the best line of the night when, after seeing the new blondes, asked if the carpet matched the curtains. Here’s Rudetsky’s spot-on recap of the show.

2 thoughts on “`Legally’ bored: Awash in blondes and tears”