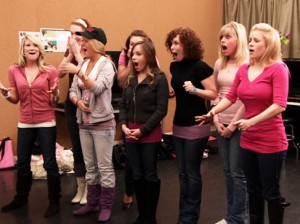 The girls meet the dogs on MTV’s “Legally Blonde the Musical: The Search for Elle Woods.”
Photo courtesy of MTV.

It’s Week 4 on MTV’s “Legally Blonde the Musical: The Search for Elle Woods,” and we started with eight girls and ended with six. By the end of this recap I’ll tell you who got dumped, so consider this a spoiler alert and stop reading now if you don’t want this less-than-earth-shattering news.

This week it’s all about bitches – not the girls – the dogs. In the musical (as in the Reese Witherspoon movie that inspired it), Elle Woods’ best friend is Bruiser, a little Chihuahua. So our contestants, under the tutelage of dog trainer Bill Berloni, learn how to interact with their four-legged co-stars. The best that can be said for this segment is this: at least the dogs are cute.

The winner of the dog “challenge” (seriously, the language of reality TV is nonsensical) is Autumn, who with pal Celina, is awarded quality time with Richard H. Blake, who plays Elle’s boyfriend, Warner, in the musical. This is the exact same pattern as all the previous episodes, and it’s BOOOOring.

Then comes the audition: the girls perform the number “Serious” opposite Blake. Rhiannon (who is charming when she isn’t slack-jawed), Lauren and Emma kick some serious butt. The episode’s only real drama came from Emma’s diagnosis of bronchitis. She proved what a trouper is as she performed her best-ever audition while sick as a dog. Now there’s some reality that has something to do with actual theater reality. 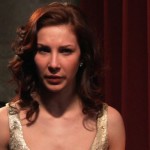 After last week’s snark fest, Cassie S. (right) was cruising for a bruising. After getting called out by her roommates for throwing them under the bus in front of the judges, poor little whiny Cassie admitted she doesn’t “do” girls. She doesn’t have girlfriends and doesn’t know how to talk to them. Poor thing. [SPOILER ALERT #2] She so deserved to be kicked off – not just because she’s a brat but because she would have been a terrible Elle Woods.

The surprise of the episode is that they ousted two girls instead of one, which meant San Francisco native Celina – much too alt-sexy to be Elle Woods – was booted as well.

Here are the girls’ full performances of “Serious.”