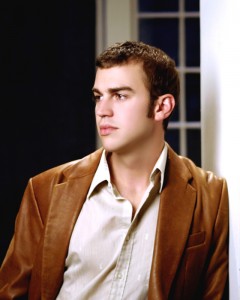 Why Spencer Day isn’t a big star is beyond me.

The 29-year-old crooner, who splits his time between San Francisco, New York and the road, has been plying his trade for almost 10 years now. He had a stint on “Star Search” and got all the requisite press when he started playing major venues such as the now-defunct Plush Room in San Francisco. I remember going to his first Plush Room gig and it lasted about 2 ½ hours – about an hour longer than your average cabaret act.

It’s been a while since I saw Day perform, so I made my inaugural visit to the Plush room’s successor, the Rrazz Room in the Hotel Nikko (a beautiful, comfortable room that would look good in a televised PBS concert or some such), to catch up with him.

I’m happy to report that Day just improves with age. He’s still handsome and goofy, which is a potent combination, and his musicianship is growing in wonderful ways.

He performed some old songs (“The Last Train to New Jersey,” “The Movie of Your Life,” “Arizona Blue”), a few covers (“Happy Together,” Depeche Mode’s “Enjoy the Silence,” “All I Do Is Dream of You” from Singing in the Rain, Elvis Presley’s “Love Me”) and made them very much his own. 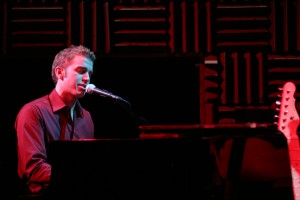 But mostly he sang new songs because he’s in the midst of writing and recording for his third album.

The new work has a muscular maturity to it both lyrically and musically.

In “Someday,” he sings to a loved in hope that “you’ll learn to love yourself like I do.” And in a suite of four great songs, he explores the notion of running away to find a sense of home. In “Skeleton in the Closet,” his young protagonist is hiding a deep, dark secret: “We’ll never talk about it, but baby everybody knows.” In “The Little Soldier,” the battleground is love, and “Joe” is an intriguing tune about running away from the point of view of the people who get left behind. And “The Vagabond” is a jaunty escape number – running to run, never knowing what you’re running to or from.

The snappiest of the new songs is a clever response to Sofia Coppola’s Marie Antoinette called “Poor Marie.” It’s Day’s funniest new song, a nice contrast to the wistful “The Weeping Willow.”

As ever, Day often accompanied himself on piano and received sterling support from bassist Geoff Brennan and Day’s longtime collaborator, cellist/guitarist Yair Evnine. Any song could benefit from the stirring emotion Evnine brings with his sensitive playing.

Relaxed and mellow – think a cross between Norah Jones and Harry Connick Jr. – Day is the real deal. For a while there, with a major label development deal, it looked like Day was going to be the next hot young thing along the lines of Peter Cincotti, Jamie Cullum or Michael Bublé. But the Utah-born Day, who calls himself the love child of Judy Garland and Johnny Cash, is too good for that kind of hype and nonsense. While the music industry wallows in the death throes of reinvention, Day will forge his own way and be all the better for it.

Here’s a great video of Day performing his song “The Movie of Your Life.”

1 thought on “Spencer’s day has come”