Oh, the sweet, sweet torture of this ridiculous “Blonde” experiment.

Yes, it’s Week 3 of “Legally Blonde the Musical: The Search for Elle Woods,” and I’m actually starting to care – not about who wins so much as who gets kicked off the show. There are so many girls I want kicked off, so many girls I want to see cry and be put in their place. Who knew I was so cruel and took such delight in the misery of ambitious young Broadway hopefuls?

We catch up with our nine finalists in their Empire Hotel suite (decorated by Pottery Barn Teen, aka PBTeen, which was a mystery to me in the last episode – and it should only have stayed that way) as they discover their next adventure will involve – yay! – “the piano guy,” Seth Rudetsky. He makes them sing while pedaling stationary cycles. And they belt and they spin, and they belt and they spin. The evil Cassie S. says “it was a piece of cake,” and when we hear her awful vocalizing, we agree it was a piece of something, all right.

There are a couple of old reliable in this show: a) the girls will wear Legally Blonde sweats with “omigod” written across the ass b) Rhiannon will have her mouth open and c) their will be gratuitous sponsor plugs throughout.

Lauren – whose face annoys me, which is a mean thing to say, but it’s true – wins the vocalizing/spinning prize, which is a mani-pedi with Orfeh, who plays Paulette in Blonde on Broadway. “I’m excited to pick on her brain,” the annoying-faced Lauren says.

For their next audition, the girls have to perform “Omigod You Guys,” the catchiest number in the musical (just try to get it out of your head), but the catch is they have to learn the Elle part and the supporting Delta Nu chorus girl parts. “Everybody wants to be the star,” is the mantra, and no one is thrilled with having to play back-up. That’s when Seth so rightly predicts the “be-yotch-ery” will begin. Yes, and it almost all comes from Cassie S. who can’t be long for this reality TV world. It is on between Bailey and Cassie S., and it’s fun. Bailey is more talented but Cassie could kick some serious butt. 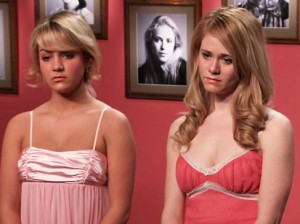 Lauren (left) and that annoying face and Lindsey face the chopping block on MTV’s “Legally Blonde the Musical: The Search for Elle Woods.” Photo courtesy of MTV

Of course, while the judges are deliberating and choosing the bottom four (host Haylie Duff says, “At least one of you is going home tonight” as if the whole quartet could be summarily dismissed), one of the girls says in full overly dramatic fashion: “It feels like death right now.” Yes, Broadway has always equaled death.

SPOILER ALERT:
Lauren, Celina, Lindsey and Emma (has there ever been a more self-congratulatory ex-smoker?) are this week’s bottom dwellers, and poor Lindsey, whose performance was pretty dismal, is sent packing. No more PBTeen dream for her.