So many fine gift ideas, so little space. Let’s get started with some great theater books.

In the realm of books about theater, this year’s standout comes from San Mateo native Thomas Schumacher, who also happens to be the president of Disney Theatrical, the producer of such hits as The Lion King and Mary Poppins. Schumacher’s How Does the Show Go On? An Introduction to the Theater (Disney Editions, $19.95) is geared toward the young theatergoer (ages 9 to 12), but it’s a hugely entertaining look at the entire theatrical picture, from the beginning of a show to the most intricate details of daily production. 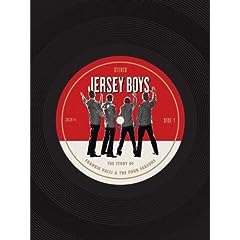 The Bay Area can’t get enough of the musical Jersey Boys. For the most avid fans, there is, of course, a coffee-table book. Jersey Boys: The Story of Frankie Vallie and the Four Seasons (Broadway, $40) contains the show’s libretto, lots of photos and a thorough guide to the real Four Seasons and their Broadway counterparts.

You think you know everything about The Sound of Music? Think again. Author Laurence Maslon has assembled the ultimate look behind the scenes of the world’s most beloved movie musical. The Sound of Music Companion (Fireside, $40) covers every aspect of the show, right up to the British reality TV show that allowed viewers to vote on the actress who wound up playing Maria on London’s West End.

The hottest show on Broadway is the multi-Tony Award-winning Spring Awakening. Fans already have memorized the great cast album, so give them Spring Awakening (Theatre Communications Group, $13.95), the libretto (by Steven Sater) and a new adaptation of Frank Wedekind’s original play by novelist Jonathan Franzen (Faber and Faber, $11.70). Franzen hates the musical, by the way, so it’s interesting to see how the play and the musical diverge.

DVDs
This was the year of the movie musical — or maybe I should say the good movie musical. If your gift recipient loves musicals, make sure he or she has Hairspray (New Line Home Entertainment, $34.98 for two-disc version, $28.98 for single-disc), the joyous movie version of the Broadway hit;

Once (20th Century Fox, $29.99), a fascinating and musically rich love story about an Irish street musician and an interesting woman he meets by chance; Colma: The Musical (Lionsgate, $27.98), a locally grown musical with catchy tunes and a better-than-average cast of characters. The best of the big-ticket DVD items this year is The Noel Coward Collection ($79.98 BBC/Warner), a veritable treasure trove of Cowardly delights. The set contains seven discs and runs some 19 hours (plus another 12 hours of bonus material that includes interviews, radio plays and more). The plays included are Private Lives (with the delectable Penelope Keith), Hay Fever, Design for Living, Present Laughter, A Song at Twilight, Mr. and Mrs. Edgehill and Tonight at 8:30.

This isn’t a CD, but while we’re on the subject of Coward, this year saw the release of a fantastic volume of Coward’s letters: The Letters of Noel Coward (Knopf, $37.50), edited by Barry Day. The beauty is that the book contains letters both from and to Coward, whose beastly wit entertains in every epistle.

CDs
The fine folks at PS Classics, the show-minded label that, in addition to turning out excellent original-cast albums, allows musical theater performers the chance to show their vocal stuff, have released some terrific new discs just in time for the holidays.

The best of the bunch is Lauren Kennedy’s Here and Now, a marvelous collection of show music and pop. Album highlight is Andrew Lippa’s “Spread a Little Joy,” followed closely by Jason Robert Brown’s “In This Room” and Adam Guettel‘s “Through the Mountain” (from Floyd Collins). Kennedy’s voice is so vibrant — at times so Streisandian — it’s irresistible.

PS Classics also is offering two more Broadway divas: Tony Award-winner Victoria Clark (Light in the Piazza) with Fifteen Seconds to Love, a solid collection mixing standards (“Right as the Rain,” “I Got Lost in His Arms”) and newer material (Ricky Ian Gordon’s “The Red Dress,” Jane Kelly Williams’ “Fifteen Seconds of Grace”); and Andrea Burns (soon to be on Broadway again in In the Heights) with A Deeper Shade of Red, a set that mixes Joni Mitchell (“Chelsea Morning”) with Stephen Sondheim (“What More Do I Need?”) and Melissa Manchester (“Through the Eyes of Grace”) with Kate Bush and Rodgers and Hammerstein (“Man with the Child in His Eyes/Something Wonderful”).

PS Classics’ Songwriter Series with the Library of Congress’ latest offering is a doozy: Jonathan Larson: Jonathan Sings Larson. The composer of Rent, who died tragically the night before his show opened, is heard singing demos and performing live, and the disc paints an incredible portrait of an artist full of talent, humor and ambition. The accompanying DVD features four live performances from Larson’s gig at New York’s Village Gate.